Suicide is the third-leading cause of death for young people within the ages of 15-24. Depression is a condition that is generally associated with being “stuck” in a mood of sadness and/or grief accompanied by a number of physical symptoms. Most typically characterized by a longer-than-normal continuation of a sad moods.

It may be hard to get through each day but they make it work. Feelings of worthlessness or emptiness may occur. Not only are these symptoms affecting them in their daily lives but they can also be used as warning signs. It affects eating patterns; whether it increases your appetite and weight gain or decreases appetite and weight gain. Sleeping habits are also affected by insomnia or even over-sleeping. Lack of energy, remembrance, and loss of interest in social activities and hobbies. Talking and/or thinking about death a lot is also a big warning sign and should just be shrugged off.

These signs can help you save somebody’s life one day, just even by smiling. If you know someone who is going through a hard time you should most definitely try to connect with them and let them confide in you, because at the end of the day we all want somebody to just be there for us and not ridicule our every mistake. After all, we are only human and making mistakes is part of the deal so we better start accepting it rather than pretending we don’t make any.

Those who have depression, such as teens in high school may have very hard times at school with concentrating or getting work done and in on time. They may have trouble trying to connect with other people and isolate themselves making the situation worse. They may be having a hard time at home, or even with themselves. So, as someone who lives as the insider and the outsider; it has a major impact on how you live your daily life even if you want to be happy that day. It’s a very hard situation to get out of for many people.

Many people go through their lives with crippling sadness and try to make it seem like they’re okay to the outside world. I feel as though if people of that outside world were to take a better look at people’s actions that we could prevent many major actions they may take such as suicide or attempted suicide. I believe that too many people walk this earth pretending to be okay rather than actually being okay because nobody wants to give them the time of day.

I believe that as a society we need to step up our game and try to relate more to the people around us. I think that if we tried to understand people instead of criticizing them for everything they do we would have a lot less depressed teens and adults. We need a change in this world, or we’re just going to run ourselves into the ground. We as a people are killing each other, and why does that seem to be okay? Because it’s not. Please consider these important facts, preferably before it’s too late to change them. 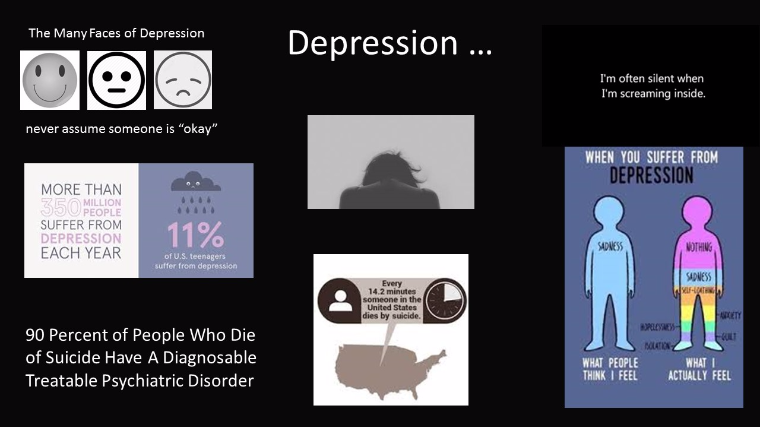 depression mental illness
Published on Oct 28, 2016
Report a problem... When should you flag content? If the user is making personal attacks, using profanity or harassing someone, please flag this content as inappropriate. We encourage different opinions, respectfully presented, as an exercise in free speech.
Patapsco High School & Center for the Arts

As a citizen of the US I believe that in order to have a smooth running country, we need a better justice system. Our justice system is supposed to...

What if school funding was used for more appealing activities for kids so students could have more pride in their school?

The struggle of having too much homework.

Every year more than 3 million reports of child abuse are made in the United States. Most abused children suffer greater emotional than physic...

This is my letter to the next president about mental illnesses.