Hello my name is Candice I am a student a Patapsco High School Center for the Arts it bothers me that I have to think about my future being affected just because I’m a girl. I’m planning to go to college and get a good paying job with my degree, I’d hate to think just because of my gender I would be limited on what everyone else gets to have. Sexism is a huge issue, still today. I, being a girl believe we should focus on it more. Sexism has been around long enough! Women were always labeled “less than” men. They couldn’t do as much, or earn as much as men. This was true to many people. I believe in the next four years women should be 100% equal to men.

Many other people agree with me, in fact in the article “Recognizing Sexism in the Workplace is Harder than it once was- but that doesn’t mean it isn’t very Real” the writer, Jessica Bennett claims we should put a stop to this. Sexism originated in Egypt and occurred centuries after that. Nowadays women still wake up feeling powerless and feeling subtle to the things we have to deal with on a daily basis. On a smaller scale, this happened to me. I am on varsity girls’ soccer for my high school. The boys team always get everything, new merchandise, New jerseys, stadium field most of the time. There’s a huge issue there. Why is the girls team getting the leftovers and why are the boys privileged to all this. On even bigger scales, in women’s first year after college wage, they earn just 93% of what their male peers do. In the workplace women will be one-quarter as likely to negotiate a raise. This is deplorable. Women are earning less than men in the same job. Female children are growing up in an environment thinking men are superior; what are we teaching them! Nobody should have to live this way and I don’t know why we do! True gender equality was proven to increase the GDP by 26%. But instead we choose to live in a pace where women feel like no matter what they do their battling for their own rights.

Sexism has been going on for way too long in fact in most religions between 2000 b.c.e and present day, women were treated the same way but even worse. In most religions they believed women were born strictly to make babies, there was extreme male dominance in religions like Judaism, Hinduism, Confucianism, and Buddhism. There were very few religions that women were actually respected and equal to men like Christianity, and Taoism. Civilizations started off believing that women were valueless. Just because we are a different gender doesn’t mean we were living just to procreate. Women weren’t allowed to be leaders in most places back then and even now, so how can we teach our female children that the sky is the limit, and they can do whatever they put their mind to when in all reality, there’s always going to be restrictions, just because they’re female. Women are people! Women are human beings that should be treated just like everyone else. Today sexism is viewed casual, politically correct, and even friendly. Why do people think this is ok? I know why, because it’s been going on for far too long with 0 consequences. Something needs to change.

We need to have tactics, skills, information, and tricks to advocate for change within the system. “We need women by our side.” We need protests, laws, and changes in the workplace. Women deserve the same amount of money as men do in the same job. We need to put pass a law that women must be paid the same amount of money in the workplace that men receive. I strongly believe this and hope you see where I’m coming from as well. 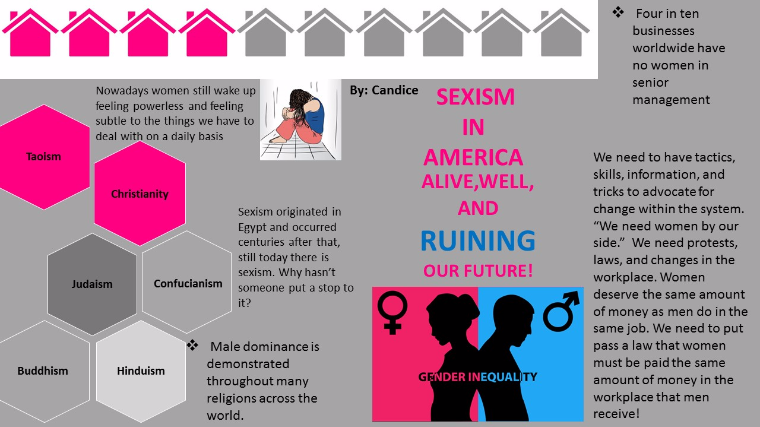 Sexism inequalitiy women's rights
Published on Oct 28, 2016
Report a problem... When should you flag content? If the user is making personal attacks, using profanity or harassing someone, please flag this content as inappropriate. We encourage different opinions, respectfully presented, as an exercise in free speech.
Patapsco High School & Center for the Arts

Our current drug rehabilitation system needs to change to be more like the 1980s Swiss.

American schools are full of awful conditions, we need to band together to try and improve it.

My letter is about making abortion illegal again, in order to help out those children who deserve to live.

Abortion is an argument that is debated frequently. I believe that abortion should be legal, but only under certain circumstances.