The hate towards transgenders is very real in today’s society. With the number of transgenders being killed because of their gender, their rights need to be more known and understood. How can you stop this, you may ask? Hopefully, I can help you get some.

Transgenders, on a daily basis, have to deal with the reality of living in a trans-hating world. For example, in the past, transgenders were arrested or even forced into insane asylums due to their gender. Also, in 33 states, transgenders aren’t protected from being fired from their job because of their gender. Also, in a report of the National Transgender Discrimination Survey (NTDS), they stated many struggles of transgenders. For example, out of all the respondents- and all respondents being transgender- 44% couldn’t get a job, 81% of them lost a job, and 71% are unemployed and have lost a job.

There are many causes as to why such events are happening. Some reasons are due to misconceptions, such as transgenders just being cross dressers or they’re just gay. Another reason is that the public lacks the understanding of transgender people. Some effects to those misconceptions and more being harassment and abuse of transgenders, escaping abuse through drugs and alcohol, and sadly much more.

But, there are some good things going on in at least the Unite States right now. For example, according to an article from BBC News, at the University of North Carolina, transgenders are now allowed to use their gender’s bathroom in school. This rule allowed all students and staff to use their correct bathroom according to their gender identity. Even though there are negatives, such as Russia’s views on transgenders and Texas’ attorney general fighting to get rid of a similar rule in Texas that’s similar to the University’s, there’s still some light trying to shine through.

So, please, next President, I hope you can promote transgender rights and at least support the idea. That alone and maybe even have teachings in schools about transgenders can help us all realize how important transgenders are. They’re human, just like everyone else, and deserve a chance at living life to its fullest. 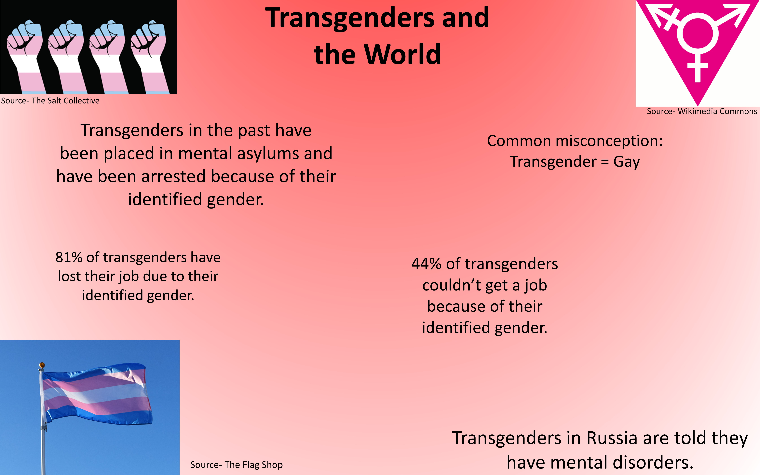 discrimination lgbtq rights
Published on Oct 24, 2016
Report a problem... When should you flag content? If the user is making personal attacks, using profanity or harassing someone, please flag this content as inappropriate. We encourage different opinions, respectfully presented, as an exercise in free speech.
Patapsco High School & Center for the Arts

Asian Americans should be better represented in the government.

My Concerns With The Common Core State Standards

In this letter I will explain the problems and my concerns with the Common Core State Standards in hopes that you will take my ideas into considera...

The cost of college has increased so much over the years that the new prices are causing students to go into debt, have to change their choice coll...

My letter is about Racism and how as a country we the people need to end racism and stay united.

Becoming a citizen is insanely difficult

Becoming a U.S. Citizen shouldn't be so difficult, but it is due to the lengthy wait time, monetary and personal cost, and the fact that most immig...

Why the president should let same-sex marriages be legal.

The Page on Equal Wage

In the United States the is a wage gap based on gender that shouldn't be there, everyone should get equal pay for equal work. With that change the ...