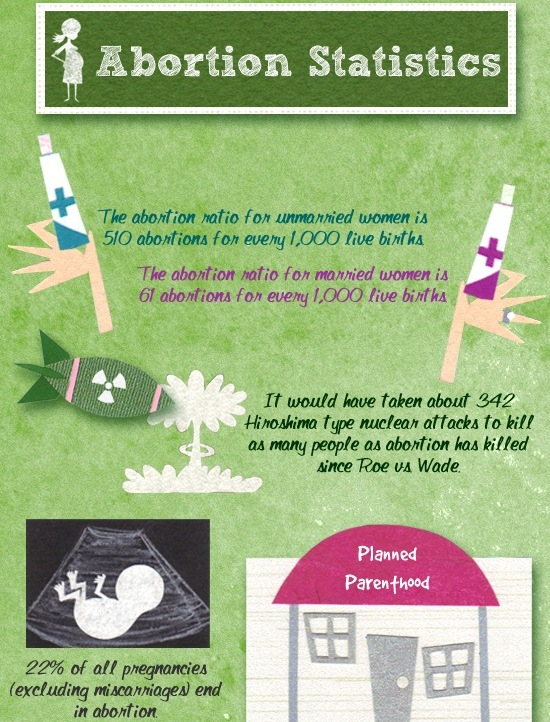 Some may say that abortion is a bad thing, and others believe that abortion is something good like a helpful thing. people morn over the lost of their children and some people can’t have children so why is abortion legal? Why do you have a choice and it might be because you’re not ready but there are so many people out there who are. EVERYBODY in the U.S has their own right to freedom of speech says the first amendment. Now I am very aware that unborn babies can’t speak and that is okay so I will speak for them!

There are approximately 42 million abortions in America each year,and 115,000 each day. Do you know what that means? 42 million unborn babies die each year! Why is that so? When there are adoption agencies to help those babies out. About 89% of all abortions in the united states happen in the first trimester of pregnancy. Mr. or Mrs. President did you know that there is such thing as adoption? Well i'm pretty sure you know that so there is no need to have abortion if you have families out there that can take care of those babies.

Many people in this world have stories to tell and there are so many people who's stories can help motivate another person so here is one . Well in the year of 2000 a mother found out she was pregnant, don’t get me wrong she was not the richest and she was not stable at all… how could she have taken care of the baby? you see Mr. or Mrs. President there was this such thing as abortion. She made it to the clinic but she stopped she knew she was not able to take care of the baby and she knew if she bought it into this world the baby probably would not survive. In the middle of that year she looked for people who could take care of the baby… I was later on adopted by my grandmother around my 1st month of life.

Mr. or Mrs president there are people waiting! The data is admittedly sparse, but sufficient. Obtainable statistics indicate that U.S. adoptions generally fall into three categories: a) adoptions from US. Foster care, involving public welfare agencies (37%); b) private adoptions of U.S. children (38%); and c) private adoptions from international sources (25%). The percentages shown parenthetically represent all 0- to 17-year-old adopted children in the U.S. as of 2007, by source of adoption. In the year 2007 there were 143,343 total adoptions but every year there are at least 42 million abortions in America

To know that there are people out there that can help it just gives you all the reason to help those children out. By month two of pregnancy a baby can already suck its thumb. The joy and the happiness of that baby should not be destroyed. This may not mean anything to you but it means something to so many others and it means something to me and all of this is sincerely coming from the bottom of my heart.

Mr. or Mrs president I wont beg but all I am asking is if you could stop abortion in the united states. This can easily be stopped by running another trial on adoption but adding people who are against abortion to lead the stand or help make the decision. This cant be stopped without you and it will help out so many babies in this world who have yet to take their first step or even breath on their own. The babies who have yet to experience their first hug or the warm hug from their mothers.

With all due respect,

abortion
Published on Oct 28, 2016
Report a problem... When should you flag content? If the user is making personal attacks, using profanity or harassing someone, please flag this content as inappropriate. We encourage different opinions, respectfully presented, as an exercise in free speech.
Patapsco High School & Center for the Arts

Christians do not have religous equality in America and worldwide.

America is known as the most obese country on earth.

Asian Americans should be better represented in the government.

American schools are full of awful conditions, we need to band together to try and improve it.

Income Inequality is an important topic that affects every single American

My letter to the President.

This is my letter.

Abortions are killing babies that haven't been born yet.