I may be far from enrolling in college however, that doesn’t stop me from caring about my future. I and many others continue to worry about the troubles that enrolling in college can cause financially. I strongly believe that college costs are too high for the average student and could be lowered to make it more affordable.

Recently my brother has enrolled into UMBC for many reasons but the largest being cost. My brother, had many opportunities to enroll into other schools, like Penn State but sadly had to settle for a more affordable college. The key word is settle, my brother had many options but most of which were never really choices. So many doors were closed for him because of money. Seeing what my brother had to go through at an age where I understand most of what needs to be considered when choosing a college makes me wonder “Why shouldn’t continuing your education be more affordable?”

The majority of college students come from middle-class families who struggle to pay off most expenses like homes and cars. When they are faced with education they often want the best for their kids. Well when not given the tools to deliver they ultimately fall short and disappoint. Let me tell a story about a girl named Monica, her largest goal in life was to attend college which was achieved when she was accepted into San Francisco State. Monica describes her experience as “bitter-sweet” as she knew her family could not afford the college. She took out not one but three loans to pay for her study and had to choose the cheapest options the campus had to offer. Monica’s plan was far from the college dream as she planned to toughen out the 4 years then pay for both the bank’s loans as well as her parents. This plan soon failed as she was forced to move back home and attend a 2 year community college. Monica abandoned her dreams and aspirations for the sole reason she could not support herself financially as told by the “New York Times”. Now I ask you Mr. (s). President, could you bare the sight of seeing your son or daughter come home from college early with their dreams crushed and their mind in the gutter as they frantically try to salvage an education all because of money?

Over the last decade, college costs have risen 54% and every year continues to rise 3-5% a year. According to “College Board” a private 4 year college was only $16,213 in 1975-1976, now the cost is $43,921. After graduating, students later in life have to rely on loans, scholarships, and grants to pay off their debt. In fact a college education is considered the 2nd largest expense in a person’s life. Costs often have other negative effects in one’s life such as delaying retirement, buying a house, and marriage. This is wildly because of declining public funds. With less public funds schools rely on their own money to attract top students in a fierce competition among schools.

Many could argue that the costs for college are affordable and well worth the benefits you receive. The many benefits such as higher employment rates, larger salaries, and more work benefits are next to guaranteed for a graduate. I am here to say otherwise, the benefits all sound great and make paying for your education easier than ever before. However, when a fresh grad is now looking for a job they feel pressured as next to immediately schools ask for money to make a profit

Much can and should be done to make college more affordable, increasing public funds and giving more money to schools will allow for schools to compete for top students without affecting the students that are already enrolled. More scholarship opportunities for students to make college an option in the average person’s life. So, Mr. (s). President are you willing to help those who want more out of their life and support them as they venture into adulthood? Or will you stay and watch the disappointment in their eyes as they receive a reality check? 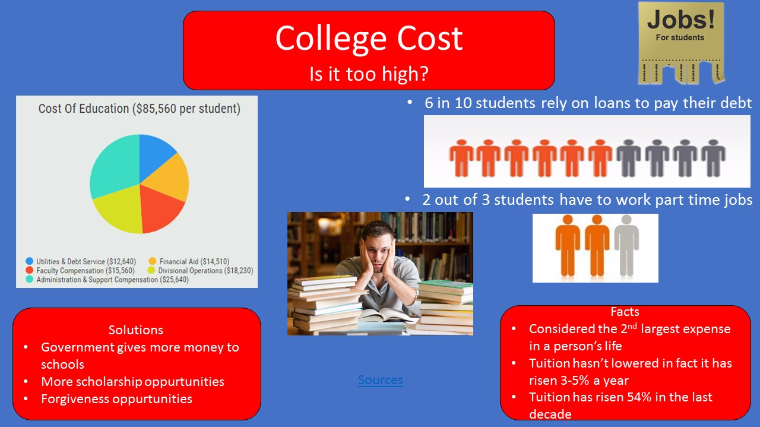 Education Costs
Published on Oct 26, 2016
Report a problem... When should you flag content? If the user is making personal attacks, using profanity or harassing someone, please flag this content as inappropriate. We encourage different opinions, respectfully presented, as an exercise in free speech.
Patapsco High School & Center for the Arts

Honduras is in extreme debt and is facing a crippling economy. They are in desperate need of our help america

The cost of college has increased so much over the years that the new prices are causing students to go into debt, have to change their choice coll...

Police Brutality has gotten out of hand. Help me try to stop it.

Discrimination in the U.S.A

Discrimination is a major problem in the US that causes violence, and even death.

Gun Control and the right of the people to overthrow government

Alcohol is a serious issue.

Hispanic Education In The United States

Hispanics don't have enough resources to go to college.

College debt and how it is effecting the youth of America.