Colleges are costing a lot nowadays, so much that debt is going to be a huge problem. According to the college boards, the tuition cost for four-year public colleges has increased by three percent since 2015. That doesn’t seem like a lot, but it will add up very quickly, and some people won’t be able to afford them easily. I know inflation is a thing, but it only increased by 0.8 percent since last year. The average family earnings, which is about 65 thousand, isn’t enough to be able to afford about $9000 a year of tuition, not to mention other needs such as housing.

Because of the rising rates of college tuition, students will be in debt for a very long time. Currently, the college debt is more than one trillion, and that is way too much. The cost of tuition should be lower so that students shouldn’t have to have more debt than needed. Also, student debt has been increased to two-thirds of every bachelor's degree graduates and about 35 thousand in debt each.

For solutions to be able to solve this problem, I’d like for more people to be aware of this problem. Also, the colleges should check which percentage of people graduate with debt so that they can adjust the tuition financial aid quickly.

For you, the president, I'd like for you to increase the number of federal aid of any students trying to get into college. It would also help if you'd help improve on any ideas the other former presidents made before you. College is important and costs are keeping people from being able to go there, so something needs to be done about it. 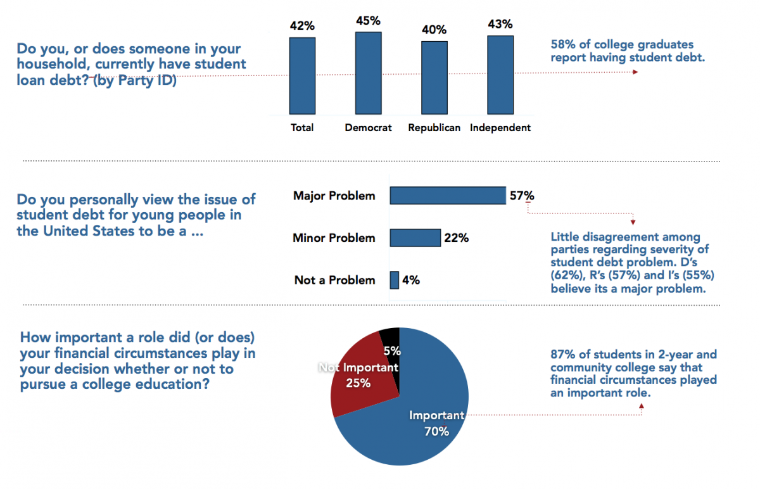 Education Costs
Published on Sep 21, 2016
Report a problem... When should you flag content? If the user is making personal attacks, using profanity or harassing someone, please flag this content as inappropriate. We encourage different opinions, respectfully presented, as an exercise in free speech.
LISA North

This group is only for Ms. Rogers' AP students.

Education for Every Day

We live in a time where things we do can heavily impact both our future, and that of others. It´s the things we do every day that people seem to st...

Despite what many people say, the Foster Care system is broken. These kids, from newborns to young adults, don't know who to turn to. The statistic...

Guns aren't the problem, it's our people.

Guns aren’t the issue, it’s the people who are operating the gun. More and more people are hurt everyday, most of this could come to an end.

"Our lives begin to end the day we become silent about things that matter" - Martin Luther King, Jr.

The people who are for abortion are already born.

All lives matter all diferent kinds of people ALL LIVE MATTER.

The Second Amendment states that we have the right to "keep and bare arm."

The rising cost of tuition in Oregon has increased over the past years and has become an issue for some high school graduates going into college. W...

Lowering the price of college for students via grants

College tuition prices are incredibly high in the United States. The next president needs to do something about this to continue to give all studen...