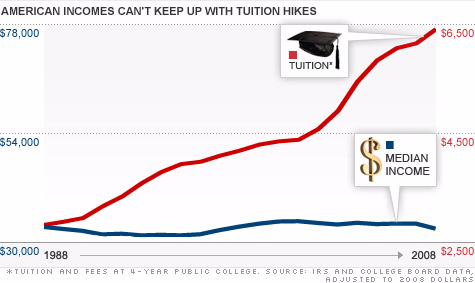 For many students college is a big part of their future, but how can they fulfill that dream if it isn't affordable? Growing up my family has always taught me the importance of college education. It was always graduate from high school, go to college, and start a career. But when the costs of college have risen more than 17 times since 1971, this dream of many teens, is slowly starting to seem harder to achieve. In fact the reason a lot of people don’t go to college today is fear of paying student loans for the majority of their life. A college degree is very important for a successful career, but with the high prices it is unattainable to a lot of people; we must work to lower prices to make it more affordable.

In the 1970s and 80s college prices rose slower that the prices of other goods and services. For reasons not very well explained, in the 1990s the price of a degree began rising faster than the cost of other goods and services (BLS Delta Cost Project). The rising costs have also raised concerns for people who are unable to get a scholarship or financial aid. In addition to these costs, students still have to pay for books, meals, toiletries, supplies, and more. Harvard University has even boosted their price of tuition two years in a row. This year Harvard’s tuition was about $45,278. If the annual increases had stayed on track back in the 1980s then the cost today would have simply been $15,189 (CNBC). But it isn't just elite colleges like Harvard that are rapidly raising the prices. The average cost of tuition and fees at a normal four year university this year was $31,231. In the 1971 school year the college tuition cost would have been $500 or even less. In a CNBC article it says, in 1971 Harvard’s $2,600 tuition amounted to about 13 weeks of an average family’s income. Today the average household needs to work for about a year to pay the full sticker price (CNBC). The question is why did the prices suddenly raise so much? Nobody seems to have an accurate answer to that question.

The price of college is limiting students to getting a college degree. I think this is an important issue that calls for attention. The costs of college must be lowered and I hope you can help to make a difference. If the cost of college keeps rising at this level, students will have to work 3,100 hours of minimum wage to work off just one year (BLS Delta Cost Project).

Education Costs college
Published on Oct 31, 2016
Report a problem... When should you flag content? If the user is making personal attacks, using profanity or harassing someone, please flag this content as inappropriate. We encourage different opinions, respectfully presented, as an exercise in free speech.
Exeter High School

Education Funding would help the people who want to go to school.