My name is Cameron I’m a sophomore attending high school in Baltimore Maryland. I’m here to tell you there is a crisis happening in a city that can’t defend itself or its innocent citizens. Aleppo, a city in Syria, serves as one of the most popular Syrian governorates, an administrative division of a country. Every day in this city people lose their lives and homes to a civil war, which they are right in the middle of. We, as a nation, should make it our responsibility to help these innocent people who are not getting enough help.

Aleppo has had a great deal of disasters in its recent years. It has a death toll of around 400,000 people according to Aljazeera.com, a number that is still growing to this day. Most recently around September 7th a chlorine gas attack had hit Aleppo, sickening at least 120 people and luckily only a few bodies were found to be dead. But a major event in Aleppo’s recent history was the bombing on August 17th. After a bombing, Omran Daqneesh a five year old boy was pulled out of rubble which was once a building, caked in dust and half of his face covered in blood. The video went viral originating from Time.com and he soon became the face of Aleppo letting everyone know just how bad this city has it. Now future President imagine you lived in Aleppo. Every day you are drowned with anxiety not knowing if it’s safe for you and your family or if your home will be bombed just because you live in this city. Imagine barley being able to feed your family, imagine hearing the explosions and gunshots while your children cry in your arms. It doesn’t sound, very fun does it? This is how people live in Aleppo.

I’m not asking we drop everything and go to help Aleppo in every way possible because I know you still have a nation of your own to run. I’m only simply suggesting little ways we can help this city in its time of crisis. There are many ways we can help this city and even the country. We can deploy several groups of Peace Corps into Syria so they may assist the citizens. We can help setup and maintain communities or camps for people who have lost their homes and families.

Future President, are you going to watch more innocent people be killed? Watch them lose their homes and families and friends? Or are you going to help them in any way you can so that these people in a third world country have a future. They are starving, thirsty, and dying they need a helping hand, will you be that helping hand? 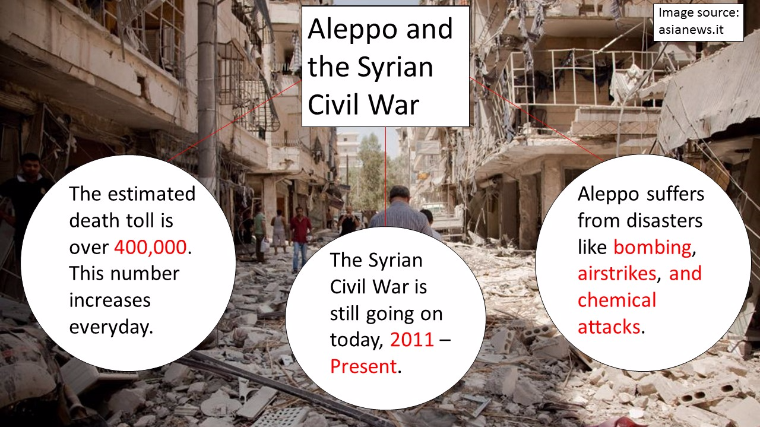 syria bombings
Published on Oct 22, 2016
Report a problem... When should you flag content? If the user is making personal attacks, using profanity or harassing someone, please flag this content as inappropriate. We encourage different opinions, respectfully presented, as an exercise in free speech.
Patapsco High School & Center for the Arts

To Help Ourselves or to Help Others... That is the Question

In my letter, I address the need of domestic aid and how our nation should cut down on foreign aid

The US should station more troops in countries around Syria rather than station troops in the Middle East to fight ISIS.

My letter is about allowing the Syrian refugees into the United States.

Expression of my concern in regards to the public petitioning to keep Syrian refugees out of the United States.

The topic of Syrian Refugees has grown importance over the past year, especially during this 2016 election. I wrote this letter to demonstrate why ...