Dear future president of the United States of America,

In Chicago, Illinois, more than 1,000 students “took to the streets to protest” the dramatic school funding cuts in April (Williams). Detroit, Michigan schools are in danger of shutting down if the government “can’t reach a deal to restructure” finances. Arizona, Idaho, Oklahoma, Wisconsin are among the 31 different states that educational funding has decreased by more than 15% (Leachman, Albares, Masterson, and Wallace). Among these states the “total state funding per student” is significantly less compared to when the recession hit. A president’s duty is to promote the growth and the progression in our nation, yet our future generation is negatively affected by diminishing school funds.

During the harsh winter time in Philadelphia, a student named Jameria “would often run to her high school Spanish class, though not to get a good seat,” but to choose a warm blanket for class (Turner, Mccorry, Worf, Gonzales, Carapezza, and Mcinerny). Jameria attends a school that is located in a district containing a rich racial population, but also containing low income families. The school funding cuts have particularly affected “areas with high rates of poverty” and students “suffer from lack of resources at home” and in their school environment (Lynch). These appalling cuts in areas with high poverty will increase criminal juvenile rates, unskilled workers, student dropouts and the wealth gap.

Not only do students experience the disadvantages of school funding cuts, but also teachers who are looking for jobs. Local school districts have dramatically cut down on job opportunities and in result there is a lack of jobs. Schools across the nation are forced “to lay off teachers” which overall decreases wages (Leachman, Albares, Masterson, and Wallace). While the number of teachers is falling, the number of students is rising which ultimately deprives students of their effective learning time (Leachman, Albares, Masterson, and Wallace).

It is essential that the United States increases educational fundings and you- the future president- must be the one that leads the way for change. Students are lacking teachers, resources, and quality education that are necessary for the advancement of our nation. Whether that includes raising taxes, providing more jobs, or increasing school budgets, it is crucial that we lead the way for student success. After all “ the only thing more expensive than education is ignorance” (Benjamin Franklin).

Williams, Joseph. The Recession Is Over, So Why Are School Districts Still Slashing Budgets? Washington DC, Take Part, 2016. Accessed 2 Nov. 2016. 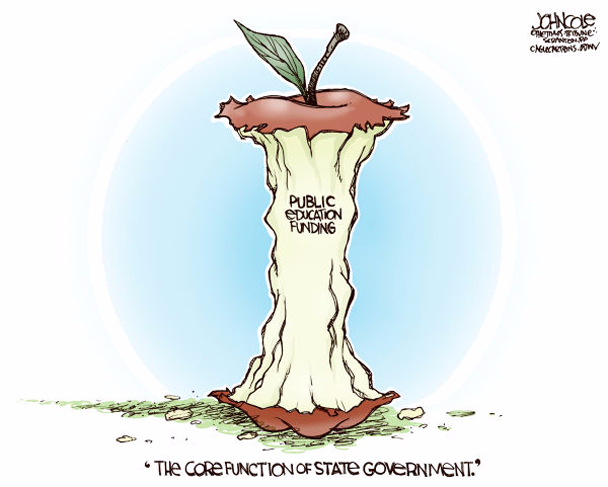 education funding
Published on Nov 3, 2016
Report a problem... When should you flag content? If the user is making personal attacks, using profanity or harassing someone, please flag this content as inappropriate. We encourage different opinions, respectfully presented, as an exercise in free speech.
Okemos High School

Letter to the President about Creative Schooling

How to improve the educational system and exploring different types of ways children can be taught, that will benefit our society and each individu...

A problem and proposal about the economy

How will you help?

Lead us. How will you help the victims in a crisis?

The cost of college tuition is a huge problem, and it's leave many in post-graduate difficulties.

People around the world everyday experience human trafficking, but how much do people really know about it? We ourselves call America the land of t...

This letter is about how bullying affects people. It needs to stop.

Guns need to be demolished

I am writing about why guns need to be more controlled. People don't take into thought how many people have died with gun violence.

My name is Janeen Harlow, I am a 14 year old 9th grade student from Northview High School in Grand Rapids, Michigan. I was like to discuss with you...

Dear Madam/Sir, I address this letter to the future president of America. This Letter Is about all the Illegal Immigrants in the United States. Ill...

Education for Those in Poverty

Poverty is a large problem, and so many children are not getting a good education due to poor funding to high-poverty areas, and because poverty ca...