For the first time in over 20 years, the president of the United States granted clemency to 46 first time nonviolent drug offenders. These 46 people were released from their mandatory minimum sentences. Mandatory minimums were established in the 1980s when the war on drugs was at its highest. But why do we still have them, and why are these people still locked up? Prisons are being over overcrowded, people’s lives are being ruined, families are ripped apart, and more heinous criminals are getting sentences with significantly less time.

Mandatory minimums are the driving force in prison overpopulation which poses a whole other problem for our country. Since the 80’s the amount of people incarcerated has grown exponentially. In fact, Washington Post estimates that 1 in every 100 adults is locked up (Badger and Bump). A lot of these people being put behind bars all don’t deserve to be there.Many of these so called criminal are first time and nonviolent offenders. A heartbreaking example of this is Weldon Angelos. Angelos had a wife and two sons when he was arrested at age 24 for a nonviolent first offence. He was sold marijuana to an undercover agent, and he was given a 55 year sentence. This man won’t get out of jail until he’s almost 80 for selling a drug that is legal in four states and used for medical purposes in 24 others (Jaffe and Horwitz). When Angelos went to his sentencing hearing he was assigned judge Paul G. Cassell. Even Cassell didn’t agree with the law that was put in place that required him to put this man away for the rest of his life. The worst part for Cassell was that he had sentenced people with worse crimes for less time. “If he [Angelos] had been an aircraft hijacker, he would’ve gotten 24 years in prison. If he had been a terrorist, he would have gotten 20 years in prison. If he was a child rapist, he would’ve gotten 11 years in prison. And now I’m supposed to give him a 55 year sentence? I mean that’s just not right” (Pitts, Jesko and Effron). Judge Cassell is not the only person in a federal position who disagrees with mandatory minimum laws. There are people who voted to pass the law who have changed their minds after seeing the effects it has on families in America

Kevin Ring was a lobbyer for mandatory minimums during his time in the Senate. In 2014 he was sentenced to 15 months of jail time for 15 tax fraud. During his time behind bars, Ring met many people whose lives were torn apart because they got excessive sentences for small time drug offences. After being released from jail he began to petition to repeal as many mandatory minimums as possible (Ex-Prisoner Reform).

Mandatory minimums were put in place to keep our streets safe. The question is: from who? African Americans and Hispanics? These laws have a racial bias, and the USSC published the “Empirical Analysis of Mandatory Minimums.” This study found that about 74% of people sentenced under mandatory minimum laws were black or hispanic. And out of the other 36% who weren’t, 15% were given a less harsh sentence. Take Sharanda Jones for example. She was arrested and sentenced for a small role in a drug deal while some of the white participants almost walked free (Horwitz and Khan). At the time of her incarceration, her daughter was only 8 years old. Jones’s dream was to be out in time to see her daughter walk across stage at her graduation ten years later. Sadly, she never did (Horwitz and Khan).

While many states are coming to their senses and repealing mandatory minimums, the government is still not being retroactive and working to get people out. Many of those who were sentenced under mandatory minimums are still in jail. However, if sentenced today, they would’ve already served their time. People like Angelos, Jones and many more were not part of Obama’s 46. These prisoners should be allowed to apply for reduced time and even an early release. 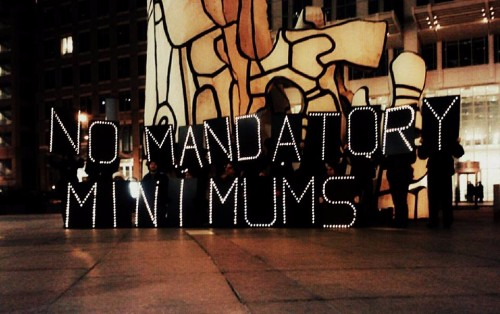 prisons incarceration drug policy laws jail overcrowding
Published on Oct 31, 2016
Report a problem... When should you flag content? If the user is making personal attacks, using profanity or harassing someone, please flag this content as inappropriate. We encourage different opinions, respectfully presented, as an exercise in free speech.
Okemos High School

Concussions in sports are a huge issue. In this letter, I want to express the issue with not attending to the problem that concussions play a huge ...

Free college will not provide the benefits needed to make the investment worthwhile.

Letter to the next president about racial Inequality

Prison Sentences Should be Longer.

Prison sentences should be longer because it keeps dangerous criminals off of our city streets.

The drug policy and drug war are overly strict and do not solve any of America's drug problems.

My letter is about drug incarceration in America, showing how one choice can affect many other areas of our lives.

Is the rapid growth over imprisonment something we should be worried about, and are they preparing those within the system for reinsertion into soc...