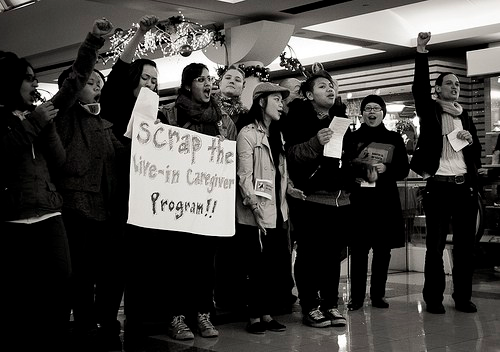 Hello, my name is Janet Becerra, and I am writing to you because there is a problem in our country and it needs to be solved soon.

The problem I am talking about is Immigration. Immigration has been such a huge conflict over the years and I think that it is time to resolve this conflict. Every day, many people are separated from their families all because of deportation. Some people don’t come here to do harm, they come here to do better and make a change in their life. There are many hard-working immigrants in the United States. They do it for their family that they have now left behind and they do it for their children so they can have a better life than they did. We all know that they’re not suppose to be here, but as long as they’re not harming anyone, why not let them stay? Why not help them so they can have a better life, like the rest of us who live here?

My grandfather was an immigrant that would come and work and then would send money to my grandmother so she could buy food and items for her children. That’s the only way that my grandparents were able to provide for their children. Also, my grandma used to make dresses, wash clothes, iron clothes, and sew clothing, that’s how she would make a little bit of money. He never harmed anyone, he was just here to help out his family, like many others. My grandfather, along with many others, earned his money by working very hard out in the fields, where work can get very cruel.

My mom was also an immigrant. She always tells me stories of the times that she had to walk out in the desert when border patrol would arrest them and just of everything that was going around her. My mom attempted to cross 5 times and 4 of those times were fails. When she finally made it she lived in San Diego with some family members. As soon as she got here she also started working to send money to my grandma in Mexico. She used to clean houses and worked in the fields. My mom, grandpa and one of my aunts worked in the peaches, cherries, kiwis, pears, tomato and just about anything that was being harvested and hiring. My mom is another example of immigrants that didn't come to do harm in the US. They came for a better life.

Thankfully she now has her Green Card and can be here. Her and my dad stayed here to give their children a better life, and I could never repay them for that. My dad was born here in the US but was raised in Mexico because that’s where my grandparents were born and lived. I’m glad that they chose to come and stay here so that my siblings and I could have the life they couldn’t have. They had to drop out of school so they could help put food on the table and pay bills. My parents take education very strict since they didn't have the opportunity to continue, they want us to take advantage of it and become someone important in this crazy world.

Yes, there are some immigrants that do come and do harm to this country and I agree, they should be deported back to their country or end up locked up. They’re the ones that should get punished, not the ones that are trying to make a living. I understand why the United States doesn’t want them here. For example, in the article “Immigration Reform That Will Make America Great Again” it said, “ The costs for the United States have been extraordinary: U.S. taxpayers have been asked to pick up hundreds of billions in healthcare costs, housing costs, education costs, welfare costs, etc.” But also, who else is going to be doing all the work? I’ve worked in the fields before and not once did I see a white person out there. I would only see Mexicans and a couple of Indians, but usually, if I saw someone white they would be in the office with the AC on.

Immigrants are a big part of the United States now, Mexican Immigrants alone make up 14% of the U.S. There are a little over 11 million of immigrants in the United States, and trying to deport them all is honestly impossible. Plus, “there would be a dire economic result from removing millions of hardworking residents…” as said in the article, 5 Reasons to Grant Amnesty to Illegal Immigrants. Without the Immigrants, it’s predicted that by 2026 there will be a shortage of 20 million workers.

Everyone is an immigrant in the United States. The Americans weren’t here first, it was the Native Americans. Plus, Mexicans were once rulers of California until they were overrun by the Americans. I find this so stupid. Just like the say, “ We didn't cross the border, the border crossed us.” Also, said in the article 5 Reasons to Grant Amnesty to Illegal Immigrants was, “The government doesn’t own the country and political borders are just lines on maps. Treating law-abiding people like criminals simply because they didn’t meet the bureaucratic requirements of migration abrogates their natural right to travel and Americans’ natural right to freely associate and make contracts.”

Immigration is a natural right and a natural right is a right inherent to our humanity, and the freedom of movement is such a right. The idea that immigration needs to be “authorized” by the government flies in the face of that freedom. So, like I said at the beginning, Immigrants should have a chance to be here in the United States as long as they're not harming anyone. All they're doing is working hard and providing for their family and trying to have a better life than they did in their country. That’s not a crime. It’s honestly a huge sacrifice.

family sacrifice immigration workforce
Published on Aug 9, 2016
Report a problem... When should you flag content? If the user is making personal attacks, using profanity or harassing someone, please flag this content as inappropriate. We encourage different opinions, respectfully presented, as an exercise in free speech.
CSU Chico

As part of the Educational Opportunity Program’s (EOP) Summer Bridge, students from Chico State participated in Letters to the Next President, an initiative from Educator Innovator, The National Writing Project, and KQED. Incoming freshman share their insights with the next president.

Money is a gatekeeper of opportunity and that’s why it is crucial to invest money towards people. It is time for every American to earn a living wa...

#2NextPrez: Letters to the Next President

As part of the Educational Opportunity Program's (EOP) Summer Bridge at Chico State, incoming freshman share their insights with the next president.

This is a big issue that needs to be stopped

My opinion on important aspects of what need to be considered when given the position of presidency.

This letter is about a possible solution to the immigration issue we are currently having in the United States. The President has the responsibilit...

This talks about immigrants and how we need to help them.