“Can you imagine how stressful it can be to have just one test to determine your road to your success (education)? Imagine failing that one test that can determine whether they make in to the next obstacle of your education? Imagine how it would feel to repeat everything because of that one test?” One of the most important issues that many students are facing today is the “State of Texas Assessments of Academic Readiness” or “Standardized Testing”. Mr/Madam President you need to eliminate the Standardized Testing. Many of the students are pressured by the time limit because it stresses them out and makes them want to rush which results in the students not do their best. Most of the pressure and fear is knowing that failing the one test may hold them back from graduating.

Many people think that Standardized Testing is a good obstacle to go through and testing is very healthy, but they are wrong. “Testing day is unhealthy” said by a veteran Mary Bowen. She says that just thinking about the Standardized Test gives her a feeling kind of like there is a pit in her stomach. She also says how “this is the United States and the students rights should not go away when they walk into the school building.” Many people agree with her, for example the last president Mr. Obama, he also wants to limit Standardized testing. He states that he feels that the test is not needed and how the Standardized testing is too much weight on the kids shoulders.

Majority of the students are stressed about failing the test because they can get held back causing them to graduate late, holding back their whole education ahead of them. It is not fair for student to get held back one year just because they failed one test. The maximum average for a student to fail the Standardized Test is 48% and because of that some of them get held back. Also the Standardized Test counts for 15% of the students grades causing them not to pass the grade level that they are currently in.

So is the Standardized Test really important? Is this really necessary for students to go through this test every single year? Well put yourself in the student's shoes,can you imagine all of that stress on your shoulders and would you like it? Well the answers are no. Here is the biggest question for you is, are you going to do something about the Standardize Test? Let me answer that for you with a big fat YES! These are your future votes at least you can do is eliminate the Standardize Test. So are you going to get on that? 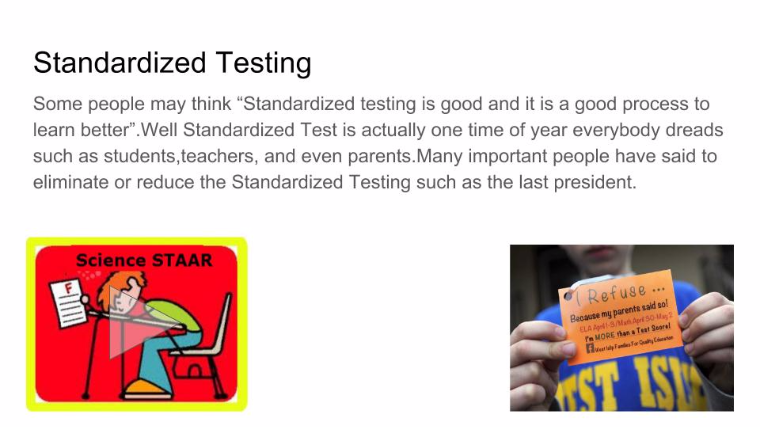 standardized testing
Published on Nov 4, 2016
Report a problem... When should you flag content? If the user is making personal attacks, using profanity or harassing someone, please flag this content as inappropriate. We encourage different opinions, respectfully presented, as an exercise in free speech.
Cedar Valley Middle School

Why you should legalize Marijuana

The border needs to be fix, everyday illegal immigrants are coming from the border without any papers to clear them.

Public transportation is needed a lot more in the United States. Here's my reasons why.

Dear Mr/Madam President the death penalty is an issue that is highly disputed in the US. While there are many people for it, there is also a large...

Dear Next President, "It is unacceptable to be raised in a country where the government supports killing the unborn innocent." Please consider chan...

Millions of illegal immigrants are being taken from their home each year. Help immigrants gain citizenship with immigration reform!

The Equal Rights Amendment Should Be Ratified

The Equal Rights Amendment, or the ERA was a proposed amendment to guarantee women equal rights as men. It contains 3 sections and would be put int...

Sex education should be taught

Standardized Testing is hurting many students futures, and it needs to be abolished.

We need to do something about this. We must take a stand and not let this big problem go.

Standardized testing is putting students all over the United States under rigorous pressure.

We need to win the war on terrorism.

No matter how old, young, or what the color of your skin is, all lives matter.

This is why standardized test should be edited for better results

Standardized testing in the school system

For the Future of o all of our minds.

I don't know who the ext president will be, but all in all, it doesn't matter. Things are crumbling, and the thing that's crumbling the most isn't ...

The Problems Of Standardized Testing

Standardized testing doesnt work for everybody.