Our rainforests are being cut down quickly and they are one of our biggest oxygen suppliers and homes for a bunch of animals. “We are losing Earth's greatest biological treasures just as we are beginning to appreciate their true value. Rainforests once covered 14% of the earth's land surface; now they cover a mere 6% and experts estimate that the last remaining rainforests could be consumed in less than 40 years.” (rain-tree.com, Page 1). Rainforests all around the world are being cut down and need our help to stop them from being destroyed. I believe that stopping rainforests from being cut down should be the priority of our future president because rainforests are one of our biggest oxygen sources and are homes for a ton of land animals.

Our major oxygen suppliers are being destroyed and if we don’t help stop this soon there will be no air left to breath. “One and one-half acres of rainforest are lost every second with tragic consequences for both developing and industrial countries.” (rain-tree.com, Page 1). This matters because it’s estimated that in the next 40 years all rainforests will be gone which means one of our biggest oxygen suppliers will be completely cut down. Also, rainforests are home to almost half of land animals around the world. “Nearly half of the world's species of plants, animals and microorganisms will be destroyed or severely threatened over the next quarter century due to rainforest deforestation.” (rain-tree.com, Page 1). This matters because different species will become endangered because we have destroyed their homes and even become extinct if they cannot find somewhere else to survive. If we don’t stop deforestation there will be huge problems involving our oxygen supply and places for animals to live.

The other side of this argument is that the natural resources found in rainforests, like lumber, can be used for many things. Trees in rainforests are being cut down to make goods that require lumber. A lot of furniture comes from trees that are located in rainforests. “Timber companies cut down huge trees such as mahogany and teak and sell them to other countries to make furniture. Smaller trees are often used for the production of charcoal.” (rainforestconcern.org, Page 1). This matters because we would have a hard time producing furniture and other wood required products. Lumber from trees in rainforests are used to make many things but we should find a way to make those things without tearing down rainforests around the world.

The president should help convince people to stop cutting down rainforests or pass a law that restricts people from cutting or burning down rainforests. This connects to the UN because It would help make sure that there is still enough oxygen for future generations and that species of animals don’t start to go extinct. This is important because without rainforests there is very little oxygen supply left which will be a big deal later on. This should be a priority of our future president because species all around the world will become endangered and even extinct and one of our biggest oxygen suppliers will be gone and we will start to run out of breathable air.

The picture below shows what our rainforests all around the world will look like if we continue to cut and burn them down. 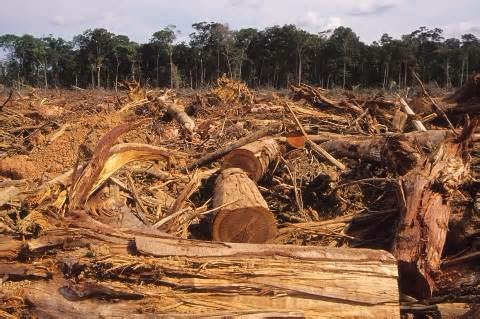 climate action life on land
Published on Nov 27, 2016
Report a problem... When should you flag content? If the user is making personal attacks, using profanity or harassing someone, please flag this content as inappropriate. We encourage different opinions, respectfully presented, as an exercise in free speech.
Chaska Middle School East

We Could Power The World With Algae!

Every single day, the world burns through 94 million barrels of crude oil. This statistic is the equivalent to draining an Olympic sized swimming p...

What needs to be done about child abuse and the abusers, and the possible escalation number from 1990.

Freedom of Speech at College

Freedom of speech should be promoted on college campuses.

Cost of college is rising and doesn't look like it is slowing down.

Gun control should be banned in America