Some people are outside living on the streets or “trying” to sleep in their cars because they don't have the money to afford a sustainable living area. The government does not allow some people to sleep in their cars also so they are left out on the streets. In the article I read on Homelessness by Annaliese on page1 she states “ All citizens need a place to live or stay.” paragraph 3. I definitely agree with this statement because it is not fair for people to be stranded out on the streets for days and nights without any help by the citizens around them or the government that doesn't pay attention to this. New York is the the largest area with the most homelessness in the United States. 6,252 families go to NYC homeless shelters every night and even then there usually is not enough space for more families so people can't get in and those people that were turned down have to go back outside and find a way to get through the night. These people need something to eat and a way to stay warm which isn't always easy especially if they don't have a car. I believe that you being the new president should allow homeless people to stay in their cars or seek help by the government and businesses because without money or food they can not do much to stay healthy or warm. 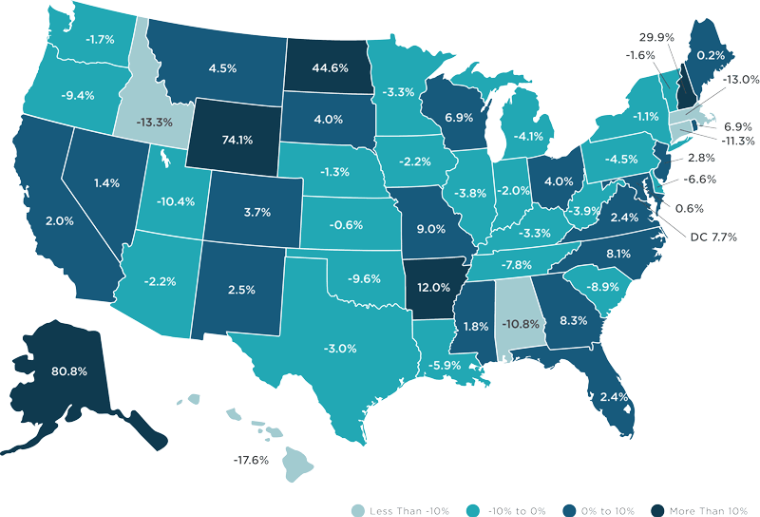 This chart shows the percentage on people without home the dark blue is more than 10% and the light bluish/grey colors shows -10%.

Some cities don't have homeless shelters so people can not go anywhere and nobody welcomes homeless people into their homes. I think that the new president should make more homeless shelters or food drives or also persuade people into making those so people have something to eat so that they don't get sick and not being able to buy the medicines they needs. If someone does not have a job and is out on the streets they will not be able to support themselves/or their family unless they go to a food drive area or a homeless shelter when even then they might not get in due to space. Not many businesses will accept someone who is trying to get a job which does not help their living style. with passage support #1 (from 1 or more source): In Annaliese's letter she says that more places will not hire someone because of their looks or because of their knowledge. Page 1, paragraph 4 “Most places won't hire someone that is homeless because of their looks or because they don't think that they are not smart enough.” from Annaliese's Letter. Why does this matter? Because without a job these people will not be able to get any money unless they have to beg for money. But businesses won't hire these people just because of how they look, if they don't look like them they think it is wrong and they shouldn't work there so these people now have to try again to find a job. Shockingly, in my opinion, most of the people without homes are veterans who fought for our country but the president can't fight for them? I think that is very wrong and should not be accepted. The president needs to try to help and get the people involved and ask peoples opinions not just watch this happen. Supporting Example/Evidence #2: One of the main reasons these people are out on the streets is because since they don't have money or a job they can not afford housing and all of these people deserve homes. Page 1, paragraph 3. Annaliese states “Some of those people are homeless because they lost their home or their jobs or maybe because houses are so unaffordable or that their are not any jobs willing to hire someone that is homeless.” Why does it matter? Nobody deserves to be out on the streets and when the president does not do anything that is bad and people lose faith and give up when they can help they can talk to people but everyone needs to be safe and we all need to help including the president. Those are my strongest two reasons why I know the president should make a change and help the people who need homes and jobs.

Some people say there are enough community programs and churches to help these people but I say that there is still more that the government and the president can do to help. The government may think that this is time consuming and costs too much money but seeing these people depressed or sick is worth the time saving lives. In an article I found it states “shift of 3 to 4 hours depending on your assignment” Regional Task Force, no names. Programs to help the homeless matter because they save these people but when the government and the president do not do anything people die or go crazy and can harm people. In my opinion that is all an issue that some people don't care and think that everybody else is doing stuff to help so they do not have to.

The new president should go around speaking to people who volunteer or own these homeless shelter programs to learn more to that he/she can help out. Global Goal 1. No Poverty fits this subject perfectly. This could help because if there was not as much poverty people would be healthier and be able to go to different countries to help protect. It matters because these people are living in extreme pain and can not do anything and not strong enough to go out and help. This should be a priority because these people will gain hope in the president and want to help but right now they can not do much because they're so tired and the president can stop that.

homelessness jobs and wages Poverty housing
Published on Nov 9, 2016
Report a problem... When should you flag content? If the user is making personal attacks, using profanity or harassing someone, please flag this content as inappropriate. We encourage different opinions, respectfully presented, as an exercise in free speech.
Chaska Middle School East

Undocumented immigrants should have an easier time becoming citizens.

We should use nuclear energy mainly, along with various renewable resources.

Effects of guns and what our country needs to change

"It's All About The Money"

Housing prices are way too high. Teacher pay is a little too low.

Homelessness is a huge problem in America that needs to be fixed. Future president, what will you do?

A Home for the Homeless

There are thousands of homeless across the United States living in poverty. We, the citizens of the US, must take action and work to build more she...