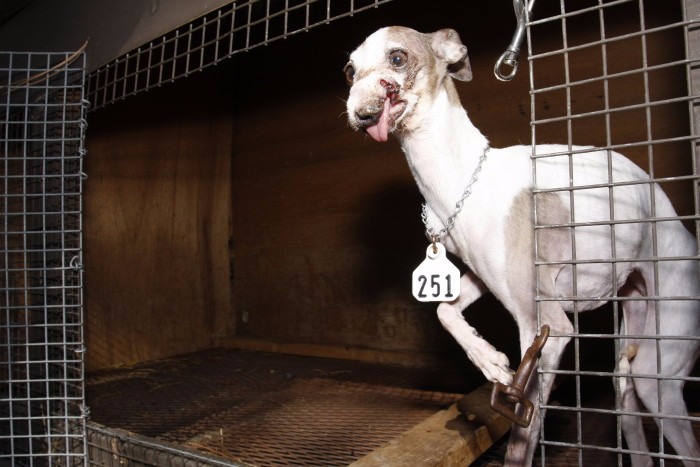 You might be wondering how the puppies are treated at puppy mills. Well think of it like this: puppies at puppy mills are treated as well as how a person might be treated in prison. Actually, I take that back. People in prison are treated better than puppies in puppy mills. The food and water at puppy mills is very unsanitary, so puppies get sick a lot. Adding on top of that, if a puppy is sick or dying, the puppy gets either very improper veterinary care, or none at all. It haunts my mind every day, the fact that there are animals who are probably so much nicer and cuter than me, locked up in cages. I love all animals and would never encourage the abuse of animals.

The only place the puppies could run around in are cages. Usually, the puppies can do nothing but sit and sleep in their cages with no chance to go into an open area to run around and play. The bottoms of the puppies’ cages typically have wire flooring that can injure the puppies’ legs and paws. Probably the saddest fact of all is that according to PAWS, puppies can be legally kept in cages their whole entire lives. Imagine that the only thing you have ever known was the inside of a cage. You never get to play around in big open areas on a beautiful day, or never get to hang out with the people (or animals) you love. It is sickening, having a cage for a home.

Moreover, puppies can suffer from many other things than small cages and unsanitary food and water. The puppies are taken from their mothers and litter mates at a very early age; about as soon as when a puppy no longer needs his or her mother’s milk. This can lead to lots of fear, anxiety, and behavioral problems. This can also be very hard for the puppies when they move to a new home, because they will probably be frightened by the new things that surround them. I, myself have asked owners to pet their dogs and have been told no because that dog had been mistreated before coming to that owner. I can only assume now that at least one of those dogs was skittish because they came from a puppy mill. This must be true because according to PAWS, roughly 90% of puppies that are in pet stores have come from puppy mills. If all I had known in my life was a place as horrible as puppy mills, I would not have a childhood at all.

Another fact: as said before, according to ASPCA, adult dogs are force-bred (they are forced to mate at the puppy mills) without breaks. This means that the female dogs are continuously reproducing, without breaks. The male dogs might be hurt from the force-breeding, but the reproducing causes a big amount of strain on the female dogs. Even worse, when the adult dogs can no longer reproduce, they are murdered.

If you are still thinking “I don’t care about some dumb dog’s life,” then I think that you should hear this: dogs have done nothing but be our friends for more than 10,000 years. They have hunted with us, played with us, and have made tons of humans’ lives happy. In fact, dogs have given us humans someone to look to for sanctuary when we are sad or lonely. Dogs' lives do matter because they live and breathe like us and there is no reason to put them in cages that hurt their paws. When I was little, all I wanted was a cute puppy who would be my friend forever. It is horrible to know of places that abuse animals when one of them could be the one you might rely on someday.

I plead with you, future president of America, please stop this suffering of animals who are nothing but kind. This issue means a great deal to me and I hope that you really read this letter, take it seriously, and do something about puppy mills. I hope that my time and work on this letter is not wasted and that it gives you something to think about. Help the world stop stabbing “man’s best friend” in the back. Please do not take this lightly and I put my trust in you, future President.

One last note: If you are a cat lover, replace every word that says puppies, puppy, or dogs with the words kittens and cats. Yes, there are kitty mills too!

puppy mills
Published on Nov 16, 2016
Report a problem... When should you flag content? If the user is making personal attacks, using profanity or harassing someone, please flag this content as inappropriate. We encourage different opinions, respectfully presented, as an exercise in free speech.
NYC Lab Middle School

With America being one of the wealthiest countries in the world it is no surprise that many Americans overlook the fact that poverty is a serious i...

Racism is a growing problem in the United States. Many African Americans and Muslims are being discriminated against just because of their skin col...

Many believe that abortion is a crime. A murder even. However, it is a woman’s choice, risk, and right to decide if she wants to have a baby or n...

Marijuana is both dangerous and helpful. it can soothe pain, help people fall asleep, and increase appetite. Decriminalize cannabis for those who...

The U.S is lacking behind in education polls and we need to fix this.

I wrote a letter to our next president regarding the issue of poverty.

Animal testing; Animals are being tested every day and are harmed in these processes. Animals can’t always defend themselves. There are over 26 mil...

I wrote a letter to our next president regarding the state of the US economy.

My letter is about how bad animals are treated around the world by puppy mills and animal testing.