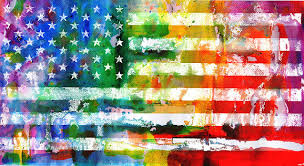 Although our LGBT community have rights and some laws to protect them, the said laws and rights are not protecting them as they should. This is a very important problem that we have today and I personally think that you, as the next leader of our country, should take care of this issue before more innocent people get hurt.

An example of the laws not doing their job is findings from an NPR.org article written by Tanya Ballard Brown titled "Do You Know It's Legal In Most States To Discriminate Against LGBT People?". This article talks about how only 18 states have anti-discrimination laws for LGBT citizens. That means there is 32 states where some can get fired from their job of they are openly gay. I personally find this appalling. We as a country stand for the freedom of individuals and yet in over have the county people can get kicked out of their molecules they love someone of the same gender. I don't really see anything free about that, but that is just me.

Another example of current laws not working is the sexual assault rates of the LGBT community. According to the Human Rights Campaign.com, on average 43 percent of bisexual and lesbian women and 30 percent of bisexual and gay men have been sexually assaulted at least once in their life. In all honesty, I find those numbers dreadful. This country talks about protecting its citizens and having their well being in mind. These statistics don't seem to me like protecting the citizens of our country. Keep in mind that these are only the bisexual, gay, and lesbian portions of LGBT. Trans* individuals have it worst of all. According to www.Office for Victims of Crime.gov, 12 percent of trans* are sexually assaulted in grades K-12 by not only peers but educational staff as well. Not only is this news harrowing, but 22 percent of homeless trans* individals reported being sexually assaulted while staying shelters meant to help them.These results should put an end to the stigma that trans* people may try to sexually assaulted someone while going to the bathroom of their gender identity, or the gender they choose to be. In reality, trans* people are more likely to get assaulted in a bathroom then assault someone else. I mean there are thousands of cases of poor trans men and women getting assaulted just for being who they are and no cases of trans* individuals assaulting someone else.

In my opinion, I feel as though we should have better laws for our LGBT community, but this is just my opinion. I don't know what the opinion of a 15 year old matters to you, but I believe in everyone having a shot at a happy life. So please Next President, care about your LGBT citizens. I know I may be just nameless face in a crowd of people fighting for the same thing, but you have to care for these people because each year, the minority becomes less and less. Please do your part as the leader of our county. As our protector.

lgbtq rights
Published on Oct 31, 2016
Report a problem... When should you flag content? If the user is making personal attacks, using profanity or harassing someone, please flag this content as inappropriate. We encourage different opinions, respectfully presented, as an exercise in free speech.
Avondale High School

Student loans should be lowered in order for people to be better financially.

We need to focus on finding homes for orphans and foster children.

It's time that we work together to fix an issue that is long overdue. And act like adults while we do it, please.

A letter addressing the atrocities that occurred because of a careless mistake in Flint, Michigan.

Illegal Immigrants are freely coming into the U.S and causing economic and social problems for the government.

Should Vaccines Be Required for Children?

Vaccines should be mandated by the government as the majority of vaccinations create a safer community.

Transgender people should be allowed to use their right to access their bathroom of choice like every other human being regardless of their birth g...