The Refugee crisis is one of the biggest issues our country is facing at this present time. As you are a Nominee for president, I'm sure that you are already aware of this. After ISIS's invasion of Mosul, Iraq in the summer of 2014, as well as the invasion of Syria,  people who were targeted by the terrorist group ran for their lives, while those who were left were met with 3 harrowing choices: Convert to Islam, pay a tax, or die. Many fled their homes, leaving with only a handful of items, and the clothes on their backs. All these people want, is a chance to live, to have a life free of being hunted and hated by people who want them dead.

I am an Iraqi-American who fled Iraq with my family in 2004, a year after the Gulf war began. Most of our neighbors were Muslims. They were kind and friendly, until that war began.Their hatred began to show, as neighbor betrayed neighbor, leaving us vulnerable to terror. Christians, Catholics, Chaldean, Yazidi. It never mattered who you were, it never mattered if you spoke the same language as them, If you weren't like them, you deserved death. So we ran. And we got lucky, we moved to America, and life was great from there. We never looked back, until now. The same horrors my family and I faced so long ago, are re-emerging in the home that we left behind. The only difference is that I escaped, and they can’t, all because of where they come from. All people deserve decent lives. And to think, that we are keeping them from doing that, is absolutely despicable.

In an article called "Philosophy and the Refugee Crisis" Professor Michael Blake from the University of Washington takes the connection between philosophy and political ethics, and applies it to the refugee crisis, saying, " Those people fleeing Syria have a powerful moral claim against the rest of the world: to be provided the circumstances within which they can have decent lives. Even those philosophical views best positioned to justify closing borders, I’ll argue, are unable to justify closing borders against these people. If we need a philosopher, in other words, we don’t need it in this particular context; what we need, instead, is the practical will to mobilize in defense of the refugees’ rights."

Professor Michael makes such a stunning point in this part of his essay by saying that nothing can really justify why we shouldn't be allowing refugees in America, or Europe. Consequently, all this terror and Genocide, has become such a normality to those living in the Western world, that the cries of these people are being ignored. Nothing has been done, and any work that has been contributed towards helping these people has had little to no effect. Airstrikes don't help. Donating money doesn't help. Ignoring doesn't help.This is not a political issue, it's not a philosophical issue. This is a human issue, and as a human, future President, it's your duty not only as President of the United States of America, but as a human being, to acknowledge the morality in this situation, and take action in helping these people. No one deserves to be kicked out of their homes, tortured, or even be killed, for simply existing. This silent Genocide cannot continue any longer. We cannot keep ignoring the cries of the refugees.

At the same time, we cannot allow just anyone to enter our country. Not everyone is who they say they are, and this is why our borders need to be more strongly protected, our screening process needs to be stronger and more thorough, by digging into a person’s history, their connections and criminal records. And anyone with extremist roots, should NEVER be allowed into this country. That is not Islamophobia, that is keeping this country safe. Excluding all Muslims should not be an option, because that reflects on our National security. It shows that our Government is not capable of weeding out good people from bad. There should always be a limit on the amount of people we allow into this country, being careful to deeply assess every person that enters our country. For the sake of the American people, get yourself together, renew this nation’s reputation as being the greatest and strongest nation on the planet.

So, Mr./Mrs. President. This is my message to you. Don't just solve the problem for the sake of solving the problem. Do it because you care. Do it because you have some form of decency, to actually hear the cries of people, and be willing to help them. Do it because thousands of American Citizens are begging you to. People are dying. And we can do something to fix that. Can you hear them crying? Can you hear them suffering? No, I bet you can't, but you can hear my voice. through my words, you can hear me. So step up, be the President of the United States and do what is right. 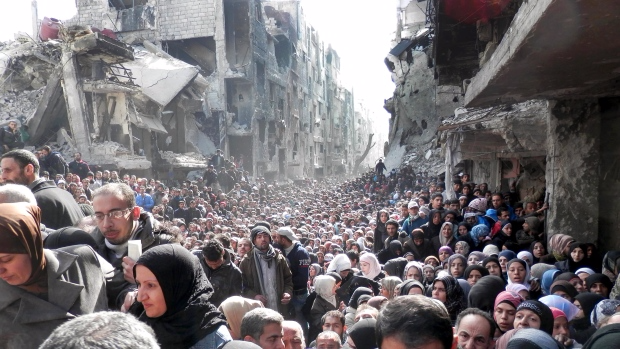 refugees
Published on Nov 9, 2016
Report a problem... When should you flag content? If the user is making personal attacks, using profanity or harassing someone, please flag this content as inappropriate. We encourage different opinions, respectfully presented, as an exercise in free speech.
Avondale High School

The Importance of Vaccines

Vaccines are a crucial tool for preventing the spread of disease. In the United States right now, a lot of people are not immunized and it is break...

IMMIGRATION IN THE U.S.

Dear Madam or Sir, Immigration is a big deal in America. Every person in America ends up paying for the immigrants too and i don’t like that. Some...

My letter to the president I'm pointing out how important Affirmative Action is in today's world.

The recent problem in immigration in the United States is rising fast. As for this, it’s causing many questions that need answers. The rise in the ...

The Crisis in Syria

The country of Syria is currently in the middle of a civil war and there are many refugees who need serious help. Though we may have prejudices abo...

There is a risk of a lost generation of Syrian children who are living in limbo. Many will not see a classroom. Syrian Refugees are unwelcome in ma...