On February 26, 2012, an unarmed 17- year- old boy was attempting to avoid the armed pursuit of a grown man. Reports differ on specifically what happened; there was a fight, running, a chase, and it ended with a fatal gunshot. The boy hadn’t even graduated high school. His name was Trayvon Martin.

Martin’s untimely death was met with uproar. His shooter, George Zimmerman, said he saw an “unknown male just walking around looking about" in the rain and reported, "This guy looks like he is up to no good or he is on drugs or something" on a 911 call. When communities learned of Martin’s death, protests began to ignite across the world. A whole new community sprung from this protest among many others: a movement known as Black Lives Matter.

Black Lives Matter is an incredible movement advocating and fighting for the rights of black men and women all over the world. Founded by Patrisse Cullors, Opal Tometi, and Alicia Garza, this movement has been wide awake and shaking since George Zimmerman’s trial began in 2013, during which far too many people blamed the late Mr. Martin for his own murder. Mr. Zimmerman was later acquitted of his previous charges of second-degree murder and manslaughter. Despite this specific trial, many people believe that Black Lives Matter movement has become redundant in the past years and that there are bigger things in the world to tackle. Issues such as the Syrian refugee crisis, terrorist threats, North Korea’s nuclear program, and many others are brought up at every turn as more important things to watch for than Black Lives Matter. I, however, vehemently argue otherwise. This movement is just getting its boots on.

This long-held protest for human rights has been in the making for hundreds of years, it just took a few catalysts to tip the bottle over. We can go way, way back in history, to the horrific capture and slavery of African men and women way back around 1619. An estimated 2 million slaves died on the trip across the sea to the “New World” and so many people of color have needlessly died since then, due to anything from the brutalities of slavery or wrongful neighbors, or simply an 8 year old boy playing in a park with a BB gun. These deaths are not only abhorrently wrong, but totally preventable.

Movements such as this have worked very well in the past. Why then, with our modern views and generally accelerated world experience, should this one fail? Many more people are realizing the error of their ways and are working to get past their prejudice, including members of my own family. The 1960’s American Civil Right’s movement certainly worked to obtain voting rights and other such human necessities to black Americans, but with a hefty price. Songs such as Common and John Legend’s “Glory” and Billie Holiday’s “Strange Fruit” move to shake our very core and have us feel a tiny, infinitesimal bit of the horror an entire population has been experiencing for far too long.

As of July 7, 2016, 194 black men and women were killed by police specifically, and Black Lives Matter has been taking a stand. Not even necessarily by the name, but in action. Colin Kaepernick, a quarterback for the San Francisco 49ers, has been taking a knee during the national anthem before a game as opposed to standing and putting his hand over his heart. He explains his stance in a quote to NFL Media: "I am not going to stand up to show pride in a flag for a country that oppresses black people and people of color." His specific stance and many similar have spread to many other players, including high school students. Some other acts of opposition have given a nod to defiances of the past, such as the 1968 Olympic Black Power Salute. A flame was ignited 50 odd years ago, and continues to burn into an inferno today.

This call to action by so many cannot be set aside. It will not be left to simmer on the back burner until the pot over boils again in the wake of more needless tragedy and death. That being said, what must we do to abolish racism and establish equality?

First, we must consider our circumstances. If you are white, live in a predominantly white community or anything of the sort like me, you have a special obligation. In the words of activist and author Luvvie Ajayi: “We no longer need white allies, but white co-conspirators. Don’t just talk about(,) really be about this life and ACT.” Use your circumstance to the advantage of others. Do what you can to amplify the voices of those without the spotlight.

Second, we must see what we can do. Take personal responsibility for change in your community. That protest on your bucket list is not going to magically appear unless you find the issues and specifically target them. You represent your community and your community represents you. Make it something you can be proud to be a part of.

Look, seek, search in those deep dark crevices of where you live to see what desperately needs to be changed. Find what needs to be done, and then;

Finally, Act. Protest. Listen. Amplify. Do everything possible in your power to encourage and assist human rights movements. Because, in the end, we’re all human. There’s no ignoring that. It’s never going away. So do something. Take action. Learn to do something that will make you proud. You won’t regret it, I promise. 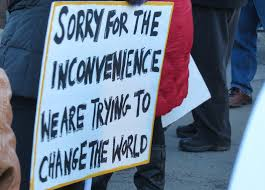 civil rights protests black lives matter trayvon martin changing the world
Published on Oct 27, 2016
Report a problem... When should you flag content? If the user is making personal attacks, using profanity or harassing someone, please flag this content as inappropriate. We encourage different opinions, respectfully presented, as an exercise in free speech.
Spanish Fork High School

A letter about Abortion and women's rights

This is a short letter to the President, entailing the dangers of air pollution and how important it is for us to face this impending problem.

A letter by Siani