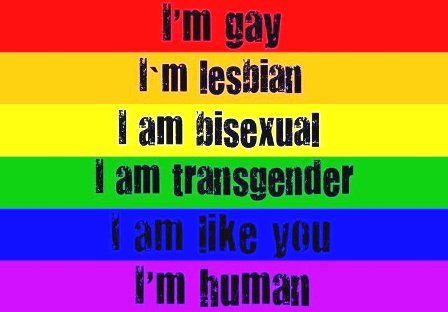 I am writing to you about LBGT's . I know that  laws have been passed for LBGT's to be able to get married; but people are still not treating them like they should be treated.  Let me start by saying you don't chose to be gay, lesbian or bisexual, you are born that way.

In this letter I will explain what each letter of " LGBT " means and what that means for the people who are that way.

Let's start  with the letter "L" in the word,  "L" stands for Lesbian's. A lesbian is a word for a homosexual woman. All this  mean's is  that a  woman  loves some one of the same gender   which is how they feel, you can not change how they feel just because you dislike it.

Then we have the "G", the "G" stands for Gay.  Gay  is  a homosexual man and just like lesbian's they are born this way.

Then after the "G"  we have  "B". The "B" stands for bisexual. Bisexual means sexually attracted to both men and women.

Last we have the letter "T". The T stands for transgender, a  transgender is a person that was not happy with the gender they were born so they changed it. Now  you know what each letter stands for i would like you to accept that you have the first amendment right to disagree with their lifestyles, you even have the right to try to stop legislation to allow marriages but to hate is to err  and promotes people who will act on their hate in a violent way.

civil rights lgbt
Published on Nov 11, 2016
Report a problem... When should you flag content? If the user is making personal attacks, using profanity or harassing someone, please flag this content as inappropriate. We encourage different opinions, respectfully presented, as an exercise in free speech.
Renaissance Charter School at Palms West

When does the hashtag stop and the actual movement begin?

This letter addresses the topic of the quality of school lunches, how the quality affects students, and what the government can do to improve it.

We are starting new as a country with a new leader and I feel as though it is vital that we don't loose track of what is important, the people.

The LGBT Community are Not Just a Number

This is coming from a 12th grade student, who is upset with both sides of politics seeing the LGBT community, and other minorities as just a number...

The people who are for abortion are already born.

A piece asking for an end to police brutality and the tension between police and civilians.