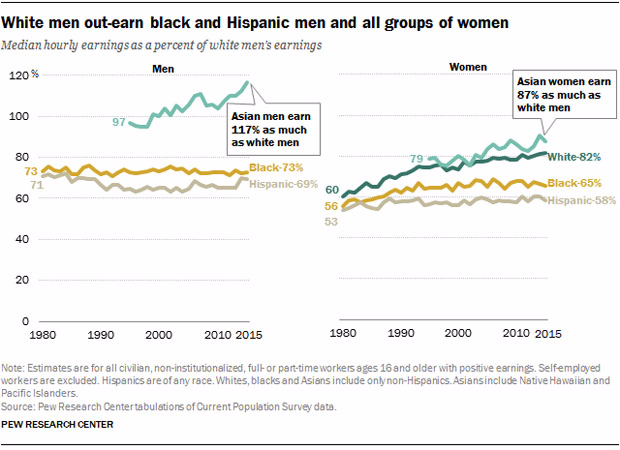 The gender wage gap is a very big problem that many people touch up on this. Many people try and seal the gap closed so both male and female can get the fair amount of pay, but up there still is a gap there. This act as many people know is to reduce inequality with women, but men also come into this situation too. “In 2015, average hourly wages for black and Hispanic men were $15 and $14, respectively, compared with $21 for white men. Only the hourly earnings of Asian men ($24) outpaced those of white men.” (Patten, 1) As you may know there have been acts, laws, articles, and even some amendments in an attempt to close this gap. But all have not succeeded but helped this issue get one step closer to completing it. One of these acts that have been made is the Equal Pay act which was passed in 1963 that made it illegal to pay women and men unequal wages who do the same job and do the same work. Although that act was signed in approval, millions of companies still do not follow them and do not get accounted for it. Almost all the States have a 11% gap or lower, New York being the highest and Wyoming with a 26% gap. “According to the U.S. Census Bureau, the earnings ratio hasn’t had significant annual change since 2007. The gap has narrowed since the 1970s, due largely to women’s progress in education and workforce participation and to men’s wages rising at a slower rate. Still, the pay gap does not appear likely to go away on its own. At the rate of change between 1960 and 2015, women are expected to reach pay equity with men in 2059. But even that slow progress has stalled in recent years. If change continues at the slower rate seen since 2001, women will not reach pay equity with men until 2152.” (Miller, 1) I believe this is mostly true in Wyoming and Louisiana since they have a 26-28% gap while the rest of the states have 19% and up. This gap is also true to woman and men of different race as you can see in the graph down below it shows you on average, annually how much each race makes compared to it’s gender counterpart. 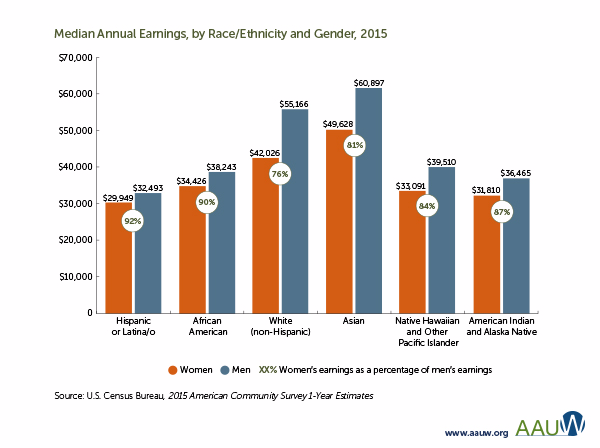 In my opinion I believe that we should close the gap so that the economy can make more money, to create newer better products and to fund for resources for people. Since the gap is still large we would save on average six-thousand, nine-hundred and seventy four dollars annually which in four years or one term you would accumulate around twenty-seven thousand, eight-hundred and ninety-six dollars and more. “Women workers in their prime earning years earned 62% less than men, or only $0.38 for every dollar men earned. During that 15-year period, the average woman earned only $273,592 while the average man earned $722,693 (in 1999 dollars).” (Infoplease, 1) I also believe that we put money and effort into better education for those who receive less pay, but it is not helping solve this situation. In a study shown in the AAUW on ww.aauw.org it showed the same results where women with the same education as men still show a gap, 16% being the highest and for the highest degree you can get. So studies showed that actually the higher study you receive in college the bigger the gap between women and men. Although despite the huge rivalry with men and woman black and hispanic women and men still have made no progress yet. “Black and Hispanic men, for their part, have made no progress in narrowing the wage gap with white men since 1980, in part because there have been no improvements in the hourly earnings of white, black or Hispanic men over this 35-year period. As a result, black men earned the same 73% share of white men’s hourly earnings in 1980 as they did in 2015, and Hispanic men earned 69% of white men’s earnings in 2015 compared with 71% in 1980.” (Patten, 1) As you’ve seen we have made no effort in this part of the situation, which I believe needs the most work in.

On the other hand I do agree that we are still closing and made an effort into putting our efforts into solving this situations. Asian men and women still have the gap but theirs is more reduced. “Asian women are the exception, earning 80 cents for every dollar earned by white men--a sum higher than women of all other races/ethnicities as well as African-American and Hispanic men.” (Info Please, 1) Also since the wage gap has been uncovered, we have made progress every year in closing the gap. Even if they are small numbers they have made small differences.

I propose that you do something more about fair jobs for different races and ethnicities. Also better don’t waste everything on education since it doesn't affect this situation. I also think that a law should be passed where for every dollar a man makes a woman gets 10 cents more with their pay check, or for simpler matters increase a woman's paycheck by 10 cents or more if you believe that the economy can use more support with money, stated in my second paragraph. Also this can solve Global Goal five, gender equality. It can help reduce/strengthen, Global Goals, eight (good jobs and economic growth), eleven (sustainable cities and communities), and four (good education). These all can help the economy growth since money helps stabilize it and as a I stated earlier we can save six-thousand, nine-hundred and seventy four dollars annually if we reduce the gap. With more money we can spend it on better education for those in poverty. And Lastly the last and most important goal, Gender Equality. This whole process is to make a human's free and equal.

Thank you for spending your time regarding a cause important to me.

Why Planned Parenthood Should Remain Funded

Many conservative politicians wish to defund Planned Parenthood but as a young woman, I think it provides necessary services and should remain fund...

The federal government should raise the national Minimum Wage.

Why the gender wage gap must be closed.

Reasons that the next President should close the gender wage gap.

Why we must close the Gender Wage Gap?

Reasons that the next President close the Gender Wage Gap.

The wage gap is an unfair epidemic and it needs to be closed.