Putting women in Combat happens to be a recent issue that is receiving more coverage in the news. The problem seems to be that we aren’t sure if we should send women into combat alongside men. Some people have said that a woman’s place is not on the frontlines with men. Others have said that women should be allotted the same opportunities as men.

In many ways, women should be given the right to be held to the same standard as men. They should be given the opportunity to compete on the same level as men. They should be given the opportunity to prove that they are either competent or incompetent. The Marine Corp has 231 females who successfully completed their training course. These females are able to switch to previously closed jobs since they have proved that they can do it. About 90% of the jobs are already open to women. However the other 10% of jobs women are restricted from. These jobs include infantry, artillery and armor. When given a survey, women that had already obtained the rank of at least major were the most likely to be in favor of opening all combat jobs to women. About 53% of the Officers surveyed supported the decision. That means that over half of the women that are already enlisted in our countries military support equal rights for both men and women. I believe that a woman should be able to have the opportunity to try and do what men do. If a woman proves she can hold her own right next to a man then she should be given the opportunity to have the same job as him. Gender should not stop someone from doing what he or she loves and what he or she is good at. As society evolves and people change, we are going to realize that women have changed too. Women aren’t just around to be housewives anymore. We are capable of so much more. We can do more than most think. So I ask you Mr. President please consider opening combat roles up to women. I believe that if you do that you will realize just how valuable women actually are on the frontline. Women have been apart of our nations military for a while and have performed admirable in many cases. Some of those are Operations Iraqi Freedom and Enduring Freedom

With all of this being said I hope that you will think about what all was mentioned in this letter. You’re decision could change the future in many good and bad ways. 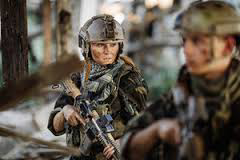 military War women in combat frontlines women's rights
Published on Oct 20, 2016
Report a problem... When should you flag content? If the user is making personal attacks, using profanity or harassing someone, please flag this content as inappropriate. We encourage different opinions, respectfully presented, as an exercise in free speech.
Oxford High School

Universal background checks for gun purchases need to be a priority when purchasing a firearm. Having this would make our country safe.

If the United States made it illegal for women to get safe abortions then there would be thousands of unsafe, illegal abortions leading to women hu...

End the War on Terror

Persuasive letter with reasons to end the war on terror