Congratulations on defeating your opposition and becoming president of America. Few people run for president at all, and fewer win. Only one person is worthy of becoming president of our country, and as we all know, with great power comes great responsibility. As president, you have power to influence economic trends, and therefore the welfare of America. There are several ways you can, as you, yourself, once famously stated, “Make America great again!” You should raise the minimum wage for the nation, which will increase spending, and lower the amount of free money you give out, therefore lowering taxes, too.

First of all, let’s address the topic of raising the minimum wage. Currently, the minimum wage is barely enough to live in the U.S.A. This deduction is based on MIT’s Living Wage Calculator (http://livingwage.mit.edu/), the fact that Mississippi is the cheapest state to live in, and the law that states you can work a maximum of 8 hours a day. Logically, those who receive only $7.25 an hour will try and save as much money as possible, which means that federal income would be low, as the more you spend, the more the government receives in taxes. While you might say that you would be spending more money than receiving money, there is a way around this. You should raise the minimum wage slowly over a number of years, like what California is doing, which will give adjusting time. Like Jerry Newman, a professor from the University at Buffalo School of Management stated, “The most important thing is that California is raising the minimum wage [doing this] over a six-year period, that is the smart move.” (ABC News, March 30, 2016)

To add on, having a higher wage would promote spending, and it would also promote employment, allowing currency to flow through the economy smoothly.. This should balance the risk of putting the country more in debt. According to the Bureau of Labor Statistics (April 2016), 2% of workers aged 25 and older, get paid only the minimum wage, and while that might not seem like much, by raising the minimum wage, more than 25% of the nation would be affected, as the Economic Policy Institute wrote (July 14, 2015). Also, receiving more income by increasing spending will boost the government income, meaning you will have a surplus of money. By raising the minimum wage over several years, you should be able to lower the rate of unemployment, receive more income, and add very little to the national debt. Also, some people state that we get by perfectly fine on the minimum wage, that isn’t true. According to https://www.whitehouse.gov/raise-the-wage, (created by the White House), the people who live on minimum wage are in poverty if they have a family. (November 9, 2016) Most of our population have families, and while about 2% of our nation lives on the minimum wage, this affects everyone connected through money. (Refer to figure A) Again, more money means more spending, and as stores and businesses earn money through what they sell, this is vital to their paycheck. If several million people are in poverty, and they can’t pay for any food or gas, then those companies don’t have enough to pay their employees, leading to a state of depression.

Finally, you should lower taxes for our economy and stop the government from giving money to those who don’t need it. Extremely high tax rates prevent businesses from growing, and currency from flowing, which slows down our nation. Bank of America CEO, Brian Moynihan, once stated that lowering taxes would make businesses feel a “certainty premium” which stimulates growth. (January 25, 2012) This means that companies would spend less on taxes, that essentially go into useless programs we don’t need, and focus on growth and employment. To balance out the lowering of taxes, you should cancel welfare programs, such as ObamaCare, or the kinds that give away free services to illegal immigrants. The government spends tons of money, that come from us, on programs that are ineffective, wasteful, or do not benefit American citizens. A kind, charitable person may argue that the programs mentioned above help people who can’t get money or have faced terrors unknown to us. However, according to Mitch McConnell, who writes for CNN, “The simple truth is that ObamaCare is a direct attack on the middle class. It's raising health care costs by previously unimaginable levels, and it's hurting the very people it was intended to help.” (October 28, 2016) Americans pay an unbelievable amount of money on ObamaCare alone, and while it does help people who can’t afford insurance, anyone can take advantage of this program. The truth is, if somebody wants to make enough money to pay for their insurance, they could, if they didn’t also have to pay for someone else’s insurance.

In conclusion, the way you can make our nation economically stable, and pay off our debt, is through raising the minimum wage and lowering taxes. By raising the minimum wage, more people will be employed, and spending will be encouraged, keeping the money cycling through the economy. Lowering taxes and the amount of money you give out should also keep the economy stable, which will help the nation prevent another disaster as bad as the Great Depression and mark you as America’s greatest president of all time. 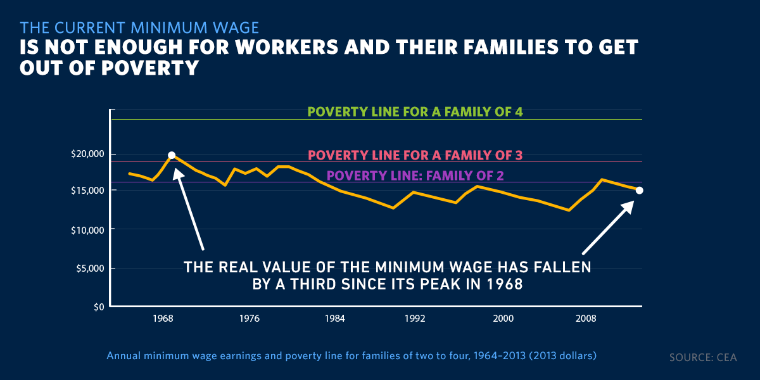 THE IMAGE HERE IS FIGURE A

economy Taxes economics minimum wage
Published on Nov 18, 2016
Report a problem... When should you flag content? If the user is making personal attacks, using profanity or harassing someone, please flag this content as inappropriate. We encourage different opinions, respectfully presented, as an exercise in free speech.
Lobo School of Innovation

People are afraid of the police because of news reports about police brutality.

We need to get out of the debt that we are in.

Dear future president, I hope you are having a wonderful day, and I am thrilled that you have the time to read my message. There are some topi...

They Defended and Protected Us, Let’s Protect Them.

It is a shame that the people that protected us, aren’t being protected. Today 8.6 percent of United States veterans are homeless, and our country ...

Body Cameras Should Be Worn By The Authorities

I am talking about two problems that I believe the upcoming president should address which are immigration and homelessness.

Donald Trump is going to "Make America Great Again", and that is what we need.

THe Ruins We Hold Within our Economy

Our Economy is damaged, do you have the power and courage to change it for the better, or are you going to just let it slip?

Not everybody has the money to put their kids into college, or no one wants to be paying of there debt for 20 or more years. Also stress and anxiet...