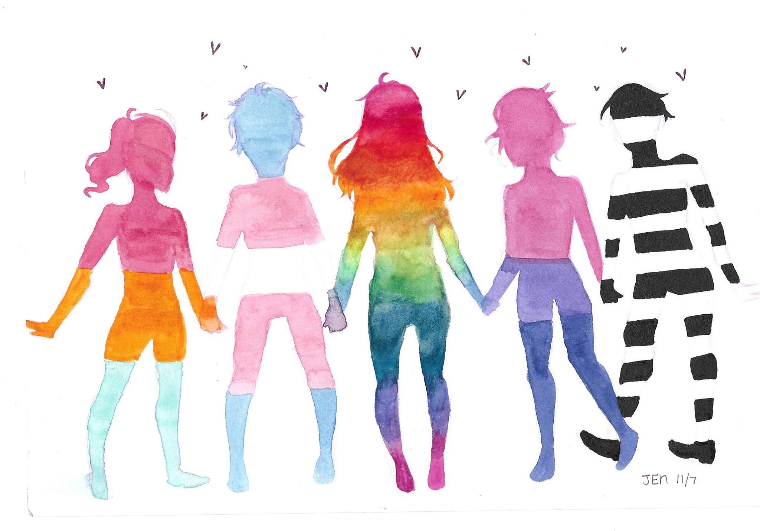 We are told as children that being different is good, every one of us is unique and should be celebrated. But that isn’t the case for LGBTQ+ people. Because of who they are, something they have no choice over, they are abused and harassed daily, and even kicked out of their homes by their own families. I personally am very passionate about this subject because this is a very real issue that doesn’t get enough coverage. There are kids my age dealing with harassment, suicide, depression, and homelessness. These are daily occurrences for LGBTQ+ youth, while the rest of us live carefree lives, blind to these issues.

According to the Human Rights Campaign, four in ten LGBTQ+ people (~42%) say that the communities they live in are unaccepting of people like them. They are twice as likely to be physically assaulted compared to their straight peers, and 92% hear negative messages about being LGBTQ+ people, whether from the internet, school, or their peers. Hateful slurs are widespread on the internet, and the word “gay” is no longer a simple term, but an insult used for jokes, while they are meant to be harmless, but have a great potential to hurt.

There is a jaw-dropping 1.6 million homeless teens in the U.S. and according to the True Colors Fund, LGBTQ+ youths make up a large 40% of that. Most are forced out of their homes, aged out of foster care, or ran away because of abuse from family and poverty. One in four are kicked out of their homes and half get negative reactions when coming out of the closet. The two biggest needs of LGBTQ+ youths are housing and emotional support, which means that they need to feel accepted into today’s society, and should be given their rightful share of respect.

As stated on the S.P.E.A.K. (Suicide Prevention Education Awareness for Kids) website, suicide is the leading cause of death among gay and lesbian youth, with an estimated 1,500 committing suicide per year. 30% of gay teens have attempted suicide near the age of 15, and gay and lesbian youth are two to six times more likely to commit suicide than their heterosexual friends and peers. Almost half have stated that they have attempted to commit suicide more than once. I was horrified and ashamed when I heard about this because these are children, under 15, who are attempting to end their lives. Some are my age, and the things I worry about on a daily basis is in stark contrast to them contemplating suicide.

The most shocking thing is though, that 68% hear negative messages about LGBTQ+ people from elected leaders. I didn’t want to believe that when I first heard about it, but in truth, unfortunately, there are actually many anti-gay politicians in America. Most are openly so, like Rick Santorum, Michele Bachmann, and Mike Huckabee. These are some of the leading politicians in the U.S. today, and, unfortunately, they’re not on our side. I do not want the future leader of the United States of America to be part of that, we must be ready to stand up for what we believe in, even against these powerful politicians.

There are already programs helping LGBTQ+ people, but there is only so much they can do. We need to root out discrimination and make sure the American people understand this problem. Committing acts of violence and abuse against people based on their sexualitys should be a crime and we need a law made against this and should be put into place immediately. Punishments and consequences for doing so should be also be legalized and regulated through the entire country. We need to teach in schools about the LGBTQ+ community and educate today’s youth on these issues, and let them know that it is not wrong to be LGBTQ+ and that people shouldn’t be made fun of for it.

Together, we can keep America the land of the free and the home of the brave. These teens don’t feel at home in our country and believe there is no place for them in our society, and some are actually homeless. I believe that America can do so much better to improve the lives of these children, teenagers, and adults, and in order to do that, we need to build safe and accepting communities for them. I know that we Americans are more than capable of doing that, so lend the suffering silent a voice and doing so will help us build a brighter tomorrow.

Thank you for your endeavors to help this country,

sexuality lgbt lgbtq community lgbtq rights discrimination
Published on Nov 16, 2016
Report a problem... When should you flag content? If the user is making personal attacks, using profanity or harassing someone, please flag this content as inappropriate. We encourage different opinions, respectfully presented, as an exercise in free speech.
NYC Lab Middle School

Marijuana is dangerous, but it can also be helpful. Medical cannabis can soothe pain, help people fall asleep, and increase appetite. Decriminalize...

Animals are being harmed because of human efforts to make planet Earth livable for us. But what about the animals who live on planet Earth with us?...

Income inequality and the income gap are a big issue that has been growing and dividing our nation for the last 30 years and needs to be addressed ...

People should have a chance to live in our country.

People in the Untied States who don't have health care are suffering from the fee of the medical bills. The american president has the power to con...

Is killing an innocent child right?

In recent years there have been many cases of unnecessary force used by the police against Black people. Nowadays, it seems that the situation is g...

As history continues, immigrants have done a lot for nation. treating it as their own motherland by helping it to prosper to the nation it is. It ...

Immigrants, who are mostly Hispanic, have come to this country for better opportunities but are instead denied and returned to their own country to...

The Importance of the Environment

A letter about how climate change is affecting the environment

Everyone deserves the same marriage rights.

Workers are rejected by several people based on their attire and/or race.