“Yes I have student loan debt, I am 22 years old studying communications at a university of course I have them…I absolutely have no clue how long I will be paying them off…I don’t really want to think about it.” Kyle Coghills is just one of millions of Americans worrying about student loan debt and retirement. This issue came to my attention when my mom said she had a 22,000 dollar student loan debt after going to get her master’s degree and that it was a small amount in terms of student loan debt. Therefore, as the next president, I hope you will help decrease student loan debt.

Gale databases say, “You might get sued for the amount you owe and wind up on the hook not just for your debt, but for the cost of bringing a lawsuit against you.” This shows that people who can’t even afford college have to pay possibly even more monumental debt. These are only a few of the consequences of a large student loan debt.

As previously stated, I, as an American citizen, want you to help decrease student loan debt before it becomes larger than the nation’s debt. In fact Bernie Sanders says, “The cost of college education today is so high that many young people are giving up their dream of going to college, while many others are graduating deeply in debt.” Sincerely, 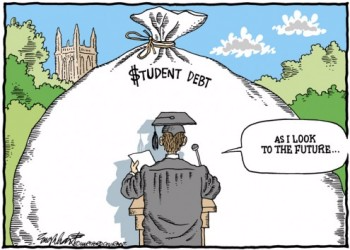 student debt
Published on Nov 7, 2016
Report a problem... When should you flag content? If the user is making personal attacks, using profanity or harassing someone, please flag this content as inappropriate. We encourage different opinions, respectfully presented, as an exercise in free speech.
Patrick F. Taylor Science & Technology Academy

Student Debt Should Be Reduced!

“By making college unaffordable and student loans unbearable, we risk deterring our best and brightest from pursuing higher education and securing ...

Racial inequality is a huge problem in America, and must be addressed. Why?

Student Loan Debt Bringing Us Down

The debt caused by student loans cause more students to not to go to college which brings our country down and puts us in more debt.

Human trafficking is an international crime that enslaves people. Victims are abused, tortured, and often die due to neglect

In our current society there seems to be a misunderstanding between citizens and the police force. I believe that lack of police training may be on...

I am a sixteen-year-old student in high school who is enthusiastic about learning. I am concerned about the effects of student loans and the cost ...

I believe racial profiling is very wrong in our country.

College debt after graduation can greatly affect the lives of those who owe.

I strongly believe that the future of this country will be significantly impacted by the way our government handles this national crisis and I tru...

The rising cost of colleges everywhere

My letter is basically about how students are having a hard time not only paying off college bills but also how when students take out loans and th...