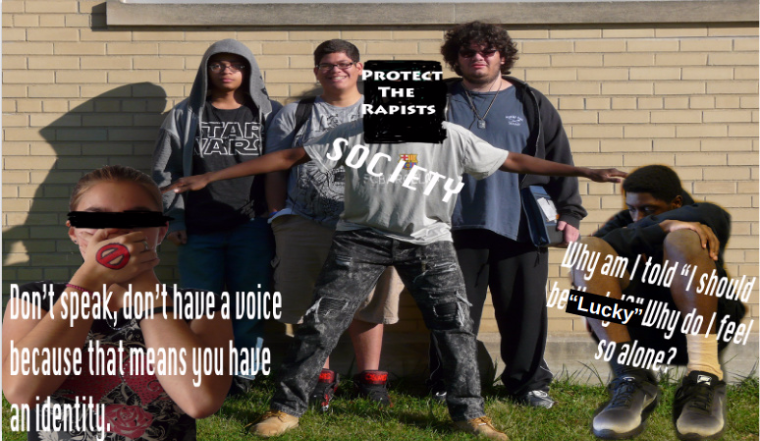 Rape culture in our society has it forced into our heads that only females are victims of rape, when that is inaccurate. Yes, females are sexually abused and that is a problem, but 38% of men are sexually assaulted as well. Yet we rarely ever hear about cases in the media where men are the victims. Why do 63% of all sexual abuse cases go undocumented?  Victims in our media are held accountable for what happens to them, male or female. They’re judged for what they were wearing, how they were acting, who they were with, where and when they were at a place. Victims are told time and time again that it is their fault for sexual abuse. Females are told they wanted it, males are told they should be lucky for going through the experience of being abused.

In the picture, I tried to capture three separate aspects of Rape Culture in our society. To the far left and far right, you can see actors portraying the roles of victims. The male victim on the far right is showing how society tells men that their assault is something to be proud of. It is also meant to show how men blame themselves more severely, feeling emasculated and alone because of the fact only 38% of men come forward about their abuse. On the left, the female actress is covering her mouth because her voice is constantly being silenced due to the rape culture in our media. Her eyes are crossed out, explaining how her identity isn’t important, making her inhumane in a sense. ‘If you don’t physically know a victim, why should it affect you?’ In the center of the photo you see a society protecting three male actors. In many rape/sexual assault cases, the victims are told that the male abusers should go free and get to move on with their lives. The men are treated as if what they did was fine and they are the real victims for being treated like they are monsters when that is overall inaccurate. As you can probably tell, rape culture in our media is bias towards protecting the non-victim. I think it is time someone took a stand for all these victims who have had their voices silenced throughout the years.

social justice rape culture society laws rape
Published on Nov 7, 2016
Report a problem... When should you flag content? If the user is making personal attacks, using profanity or harassing someone, please flag this content as inappropriate. We encourage different opinions, respectfully presented, as an exercise in free speech.
Troy High School

Many schools across the US have removed many of the things students actually wanna do and enjoy going to school for.

Let’s be clear we did not say only black lives matter; social media said that. We know that all lives matter but right now we have to focus on the ...

The Other Side Of Police Violence

I think we need to work together to solve this problem. Not just go around killing and hurting each other just because we’re getting back at each o...

One Way the American Economy is Being Destroyed

College debt is a very serious problem because it is increasing yearly, leaving students swimming in debt when they get out of college. With this b...

It's guns and bullets /and some cops take advantage of that they do want they want / shoot when they feel like it / arrest who they want to / and t...

Never let drugs and alcohol abuse control you and don't let it change who you are.

The TRUTH about vaccines

Children should be vaccinated because it protects them and the people around them from the spread of infectious diseases.

Nukes are a recipe for trouble so we should stop producing and storing nukes.

Our video was written and produced last spring in conjunction with KQED's #whatsmyissue video campaign. It's time to insure equitable funding in ou...

Keep undocumented immigrants in the US

Undocumented immigrants Should Be Accepted