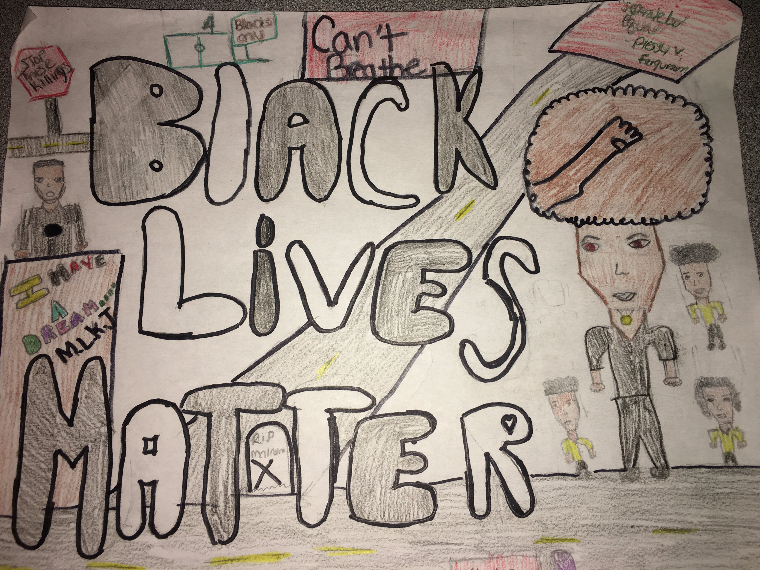 African Americans were getting treated differently from 1619 to today.  How do we stop the killings that the cops are doing? We did not say only black lives matter, but right now we are the ones getting killed. Blacks live are in danger, and we need your help.

A lot of African American lives today are getting taken by cops. Let’s be clear we did not say only black lives matter. Social media said that; we know that all lives matter but right now we have to focus on the killings of black lives. I think that the killings of black lives should stop because some unarmed people are getting killed.  In 2015 cops have killed more than 100 people. I saw with my own eyes , there was a cop who was beating a woman with a baby in her arms and a little girl on the left of her. He was beating her while walking on the crosswalk to the other side of the street. What I'm trying to say is that if white people do something it’s ok but if  black people do something, it’s a hate crime and we get sentenced to life in jail.

I, as a black person, hate to see my people get killed or hurt by cops or people that don’t want them in their neighborhood. Everyday I see videos or photos of black people getting killed by people or cops on social media. Nobody is doing anything about it, which is not good, but at the same time we don't want to get arrested or killed.

I really do hope that our next president stops these hate crimes and racism.

black lives matter
Published on Nov 9, 2016
Report a problem... When should you flag content? If the user is making personal attacks, using profanity or harassing someone, please flag this content as inappropriate. We encourage different opinions, respectfully presented, as an exercise in free speech.
Troy High School

Police Brutality Must Be Stopped

In the first three months of 2016, 250 people have been fatally shot by police officers. According to the Washington Post near the end of the year...

College tuition is too much money.

Gun Violence Could Take Your Life

The lives of many are at risk in America due to police and citizen issues.

Our video speaks to the increasing problem of Islamophobia in American society. We need a president who will stand up to bigotry!

The letter that i had wrote the the future president was that he needs to do something about these people who are sending death threats to NFL play...

Dear future President, Have you have seen in the news? Many unarmed young black men have been fatally shot by police officers across the country. ...

Letter to the president based upon police brutality.