Last spring my family and I visited the National Museum of the American Indian in Washington D.C., which is part of the Smithsonian Institute and is funded by the U.S. government. I was appalled at how it was being used as a platform for propaganda that showed how Native Americans like, and are happy, with the way their reservations, which is an area of land within the U.S. that belongs to a Native American tribe(s) under a treaty or any other agreement with the United States, are right now. But in reality, nothing could be farther from the truth. Life on a reservation is hard, with little hope of a brighter future. This is especially true for the Native American youth, many of whom experience high levels of depression, substance abuse, and even suicide. Something needs to be done to help these young Native Americans who have been largely forgotten by our country!

This applies to you, as the president, the rest of the government and our nation as a whole because we are the cause of the poverty and despair of the Native Americans. The resulting mental illnesses, like depression, ultimately lead to substance abuse and suicide at a young age. According to former Senator Byron Dorgan of North Dakota (who chaired the Senate Committee on Indian Affairs), Native American youth suicide can’t be looked at without considering the past. Suffering on reservations is directly connected with a “trail of broken promises to American Indians.” Those broken promises came from the United States government as far back as the 19th century with treaties that promised health care, education and housing, which for the most part wasn’t given. Furthermore, experts of Native American issues say that “...decade after decade of extreme poverty, combined with physical isolation and the destruction of Native American culture, has resulted in widespread depression, alcoholism, drug addiction, and a suicide rate...posted as 190 percent of the national average and rising.”

As mentioned above the high rates of depression, substance abuse and suicide come from the physical isolation of the reservations, the decimation of Native American culture, and the severe poverty Native Americans face. But, the poverty of the Native American reservations is much worse than one might imagine. American Indian psychologist Joseph Stone says 2 out of 5 children are living in poverty. This crippling poverty inflicts worse damage than we are used to seeing in the United States. According to Native American Aid (a program in partnership with Native Americans), reservations are comparable to third world countries. It would be unacceptable if there were third world living conditions anywhere else in the U.S., so why shouldn’t we be just as outraged at the fact that reservations are like this? This devastating poverty is a huge contributor to the extremely high rate of depression and other mental illnesses.

The thing is, we as Americans can stand around and spout as many statistics, facts and numbers as we want, which is all the government seems interested in doing, but it won’t fix anything. A Huffington Post article says that throughout the past two years alone over 830,000 Native Americans, which is 15 percent of the 5.4 million Native Americans that reside in the United States, have been diagnosed with mental illnesses. If you do not do something to change this, this outrageous amount of mentally ill Native Americans will continue to grow at alarming rates. The United States is a supporter of equality, but if you, as president, and the rest of the government, ignore what is happening on the reservations and the state they are in, how is that promoting, or even showing equality?

According to the U.S. Department of Justice, all Native Americans are “...citizens of the United States and of the states in which they reside.” If all Native Americans are citizens of the U.S., why don’t they also receive government assistance, attention and programs like inner cities do that help the children and youth living there to have the chance to have more opportunities than what their community can offer them? Since the current government doesn’t seem particularly worried about the issues on the reservations it will be up to you to address this important matter.

The first thing that will need to be done is a formal apology to all Native Americans from the U.S. Government and citizens for what has been inflicted on them throughout the past few centuries. Ideally this apology will come from you, the president, as I believe that it would mean more to come from someone who represents the United States as a whole.

Next, mental health, substance-abuse and suicide counseling should be easily accessible and affordable on every reservation. The Indian Health Services department helps 2.2 million Native Americans, yet it is continually underfunded, which needs to be changed. There are some other programs existing as well, but they are small (mostly run by tribal leaders) and have little to no funding.

Investments need to be made in the primary and secondary schools so that the teenagers will be able to take advantage of scholarships and go to college. In order for the teens to actually get scholarships though, there needs to be a bigger program for Native American youths to get scholarships for college. The only way for them to rise above the poverty of their reservations is to get a good, complete education that will allow them to get a professional job and make enough money to live comfortably.

There should also be classes at every reservation school teaching the Native American children and youth their culture in school why they should be proud of it and themselves. It should be each tribes choice whether they only teach about their culture and traditions or if they teach the culture and traditions of other Native American tribes as well. All other schools in the United States should also be required to teach the actual history of how Native Americans have really been treated throughout the centuries, the state of reservations, how Native Americans are silenced today, and the problems that overwhelm Native Americans. This way, children across the nation will know what truly happened, and this will ensure that the past (and present) mistakes won’t be repeated by future generations.

The government will then need to uphold all (fair) treaties, such as the Fort Laramie Treaty of 1868 or the Treaty With the Six Nations from 1789, that they have made with any Native American tribe and/or reservation at any time in history. All broken promises and agreements will need to be fixed in order to move forward with fixing the issues Native Americans face. Along with keeping all treaties, promises and agreements it is essential that we also return as much stolen land as possible to the Native Americans. I understand completely that it will not be possible to return much of the land that we stole as that is basically all of the United States, but if there is any land that is possible to give back to the Native Americans to do with as they like, then we need to do that. All the current reservations should also all be preserved in the sense that Native Americans have total control and rights over the land. No one, without the Native Americans of the specific reservations permission, would be able to use any natural resources, build anything or tamper with the land.

Finally, reservations need to be made into livable and stable places. A task force of tribal leaders, government officials and people from industry should be put together to create viable solutions to creating jobs on the reservations so that people can comfortably live and support themselves. The Native Americans living on the reservations don’t have the resources themselves, financially or emotionally, at this point. According to psychiatrist R. Dale Walker, a Cherokee who specializes in American Indian psychiatric issues, the Native American community has begun to say, “We can grieve no more. We’re cried out. We just can’t respond anymore to the problem.” It also can’t just be done by the government though. This needs to be done in partnership with already successful businesses in the U.S. Everyone needs to be brought to the table to come up with solutions that will allow reservations to be financially stable and livable.

This is a matter of fairness and equality for everybody. We need to change the situation on reservations so that all Native Americans have the same opportunities as people off of the reservations do. It’s not fair for there to be inequalities of opportunities for people just because of their ethnicity, race, or where they were born. As a nation we fight for and support equality more than anything else, and, to put it simply, equality is fairness. If our own country can not be fair with how it treats its citizens, then why should anyone else listen to our speeches about equality and how everyone is equal? As President Franklin D. Roosevelt said in 1940, “We must remember that any oppression, any injustice, any hatred, is a wedge designed to attack our civilization.”

It is up to the people who created the problem to fix it because we have given the Native Americans almost nothing, not money, experience or tools, to fix it themselves. The number of Native American youth who have problems with mental illnesses, substance abuse or suicide is frightening and is not to be ignored. Things need to change for Native Americans, and the best person to initiate the start of this change is you Madam or Mr. President. You are the one the United States looks to in times of need and you represent our nation as a whole. I truly hope that you will consider everything that I have said in this letter. I look forward to seeing Native American youth mental health illnesses, substance abuse and suicide rates go down. It is up to you, the President, to change things. 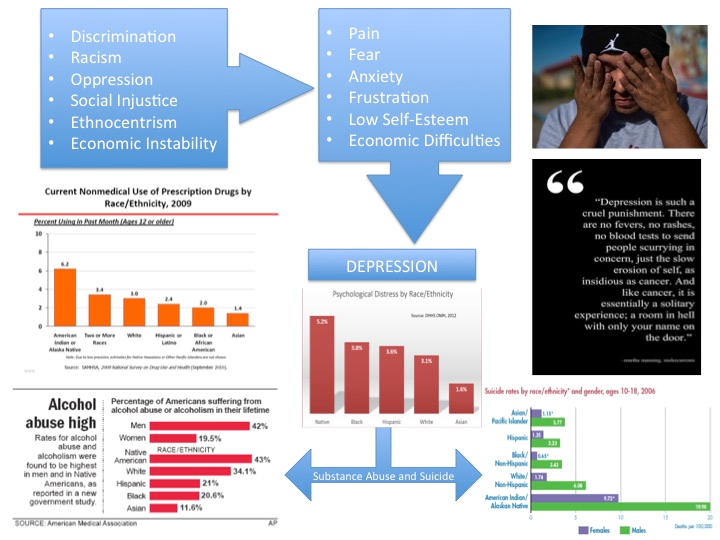 substance abuse native american depression suicide
Published on Oct 3, 2016
Report a problem... When should you flag content? If the user is making personal attacks, using profanity or harassing someone, please flag this content as inappropriate. We encourage different opinions, respectfully presented, as an exercise in free speech.
Shelburne Community School

Everyone should have access to healthy living shelter conditions.

Global Warming is a problem that has to be addressed now.

I believe that animals should be treated more like citizens. And here they are, being hurt, killed..

The opioid epidemic is a big problem in the United States. Something has to be done fast.

9/18/16 Dear future president of the United States, Millions of women around the world do not make the same amount of money as men do. Did you...

There are many causes of homelessness, and many ways our government can address this issue.

Depression is an ongoing problem.

My stance on Education

Drug abuse is a growing issue in America and addiction is plaguing friends, family and loved ones.

The Problem of Depression

Depression is a national issue that needs more attention.