Pulse Orlando Night Club, Sandy Hook Elementary School, Columbine High School, these are all mass shootings that could’ve easily come to an end. These mass shootings all started off with just a few shooters and could have come to an end if just one victim had a concealed carry permit. If laws require background checks and firearm training to receive a permit, then the nation would be much safer and many good things would come from it.

CCW (or Carrying a Concealed Weapon) should only be allowed for the people that pass the laws for obtaining a permit. For example, everybody that wants a permit should require a background check, to make sure that they are not a criminal. Along with the background check, it should be required that you go through at least 48 hours of gun safety training, and shooting practices, to make sure they are trained with the weapon. Teaching people about how weapons work would make people much safer around them, and more protected in life-or-death situations.

If laws require background checks and firearm training to receive a permit, then the nation would be much safer and many good things would come from it. The next time the news turns on and shows a mass shooting happened somewhere around the world, just wonder what would’ve happened if one victim had the ability to fight back. 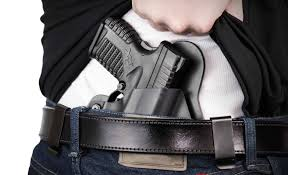 gun issues safety conceal carry
Published on Oct 31, 2016
Report a problem... When should you flag content? If the user is making personal attacks, using profanity or harassing someone, please flag this content as inappropriate. We encourage different opinions, respectfully presented, as an exercise in free speech.
Exeter High School

Rape culture is a huge problem here in america, but the first part of fixing the issue is addressing it.

Too many people are being killed each day. Two ways that we can prevent unnecessary killings is by always performing background checks when guns ar...

Gun access is a big problem that you should address

In the last years, gun shooting has gotten out of control and many innocent people have lost their life. There are shootings everywhere and this is...

My letter is about gun control