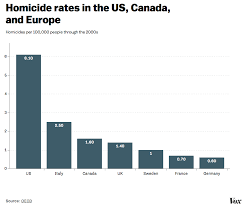 The country's safety and future is in the hands of our law enforcement like police officers, firefighters, lawyers and sheriffs. Is the power going to their heads just a little bit too much where they feel they don’t have to follow all the rules, or are they not thinking enough and reacting on emotion instead of strategic thoughts? Due to these decisions they’re making they’re costing hundreds of lives that didn't even deserve to be taken. With the increase of unarmed deaths by police in the past 5 years, people’s safety and comfort are being threatened. An issue worth considering in the next four years is to have stricter rules for police officers and stricter sentences if a police kills someone unarmed.

I think the first thing we need to do is have stronger rules on police officers and make it clear what is legal and right to do and what isn’t. The power of being a police officer or chief is going to their heads. What I mean by that is they feel like whatever decision they make is right and they won’t be charged for it even if it takes someone's life that didn’t deserve it. Police always make the plea that they feel their life was in danger and that usually gets them by with little to no charge against them. “It’s difficult to convict a cop because it’s a question of whether it was too much force or not,” Harris said. It’s a very flexible standard that has to be interpreted in every case.

Another issue is that police react more on emotion than on strategic thinking in stressful or unsure situations. In the article is states that police are used to people obeying them so the minute someone doesn't react to their commands they become stressed and start reacting by emotions and not thinking and this results to thousand of deaths a year. I think police officers need more training for when they’re in more stressful situations, like when they're in training to become a police they need to simulate a really stressful situation and have the person make a choice by what they think. I think this would help to see who’s really eligible to become a good police officer in the actual world, and prevent as many deaths from happening. America has the most amount of deaths in a year or even a day compared to other countries. From the articletheguardian.com/thecounted.com states that the police in the U.S have shot and killed more people in every week in 2015 than shot and killed by German police in an entire year. The first week of 2015 had the fewest fatal police shootings of any that year, with 13. While the german police had killed six people by gunshot in 2011 and seven in 2012. The homicide rate in the U.S is five times that of Germany and that is ridiculous and uncalled for.

I think that cops deserve stricter and longer sentences. The relationships between them and lawyers protect them from the sentences they deserve and need. Cops need to experience the consequences of their actions to learn that it’s not okay if you’re a cop or not. From the website www.washingtonpost.com, an article I read claims that out of 54 police who were charged for fatally shooting somebody while on duty, 35 of them had their cases resolved and 21 officers were acquitted or had their cases dropped and went right back to work after that. This shows just how easy it is for police officers to get by after they’ve made a “mistake” and shot someone that didn’t do anything wrong. I think a solution to this is to make it harder to become a lawyer and change who's picking the lawyers eligible for cases like that. Jurors and lawyers also tend to feel sorry for the cops because they’re thought of as hard-working, underpaid, and struggling. People are brainwashed to think that police officers are always right and that tends to lead jurors to think that the police officer is the good guy in a case no matter the situation. To get jurors to buy into the story where the police officer is bad goes against everything they grew up on and believe in. I think that we as people need to remember that everyone is capable of a mistake or bad judgement even an officer.

Lastly but certainly not least is that people are worried about their safety and if it’s really actually safe to be around police. People are worried to go to the store or go to the park because they don’t know what to expect. Heck, you can’t even pick up your kids from the bus stop without getting shot and killed. These types of situations are what creates more violence because nobody can trust each other and that results in more people carrying guns, which results in more shootings and killings. These situations have a lasting effect on people and families and there won’t be any trust in the law system unless it starts being built up again to be even better. So Mr/Mrs President since you’re so big and powerful, what are you gonna do now that people’s lives are in the palms of your hands?

unarmed victims charging police for crime safety police brutality
Published on Nov 8, 2016
Report a problem... When should you flag content? If the user is making personal attacks, using profanity or harassing someone, please flag this content as inappropriate. We encourage different opinions, respectfully presented, as an exercise in free speech.
Avondale High School

There are more ways to bully now and the effects are greater than ever.

Dear Mr./ Mrs. President, The biggest problem in the United States right now is police brutality. I think it is a big problem that we hav...

A letter about why poverty needs to be looked at more closely, and in turn, fixed.

This about the black lives movement and how it affects America.