Seaworld is known for their whales, but according to the “Blackfish” documentary, Seaworld has been abusing whales for years. Many people took a stand against Sea World and thanks to them, Seaworld is getting rid of their whales. Due to whaling, many countries have placed a ban on commercial whaling. However, some countries believe that they should continue. This has caused the whale population to significantly decrease and made the species endangered. Whaling is a dangerous and brutal act and if it continues, it will make the species become extinct.

Ever since the ban on commercial whaling, over 50,000 whales have been killed. That is 2,000 whales a year according to the Whale and Dolphin Conservation (WDC). This ban prevents commercial whaling all around the world. Unfortunately, Japan, Iceland, and Norway have found loopholes in this ban and continue to hunt whales. For example, Japan claims that they use the whales for ‘research purposes’ (WDC). What are they trying to research that makes the whale population decrease 2,000 whales per year? Why do they have to kill the whale for research? In general, when research is being done on a species the scientists try to keep as many alive as they can. Their goal is not to hurt the animals, just learn from them.

Whales who live in captivity (Sea World) are put into small pools and boxed in by glass or plastic. These creatures are easily terrified and can act aggressively if scared. Many humans love Sea World and watching their whales do tricks. Well, try to put yourself in the whale’s fin. A large machine has taken you away from your family and now you are in a small contained area with no way to escape. All of these strange creatures are watching you and talking loudly. You have no idea where your family is and if they are alive or not. These strange creatures hold all of your food and only give it to you if you do certain tricks. You will spend the rest of your life in that same enclosure and never see your family again. This a tragic idea invented by humans. Taking an animal away from their family for our personal gain, how selfish are we? If we were in the whale’s position we would feel differently, but it is not fair to the whales. They have caused us little harm, yet we still punish them. We have done more harm to them in one year than, they have done to us in the entire time they have lived on Earth. These living creatures deserve to be left to survive on their own because they have been through more than anyone can imagine.

Seaworld used to harm whales, but as a country we have realized that this is wrong. We fought together and made it stop. It took years of hard work and strength, but we made it stop. The United States should take a stand and serve as a role model for other countries. We proved to our country that whaling is a brutal act and we can and should prove it to the rest of the world. 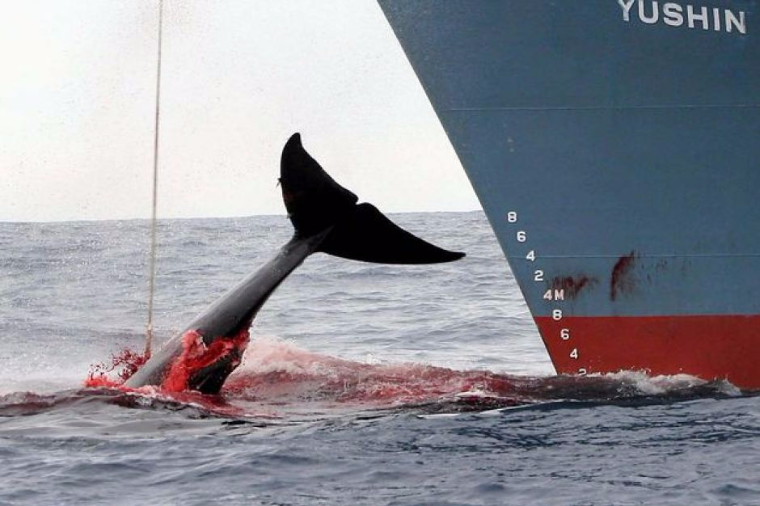 whaling animal abuse
Published on Oct 31, 2016
Report a problem... When should you flag content? If the user is making personal attacks, using profanity or harassing someone, please flag this content as inappropriate. We encourage different opinions, respectfully presented, as an exercise in free speech.
Exeter High School

Think about how many stray animals there are. Don't you think America should have more animal hospitals, etc.?