How are guns a big issue in today’s world? A gun doesn’t go around killing people, it is the messed up people that use a gun as weapons, or as a source of payback. A majority of the people don’t use guns as a weapon. They use it as pleasure or as a source to get food to feed their family.. People may say well they don’t need their guns to get them food, just go to the store, but many people can’t afford to buy meat every week. Killing their food may be a family tradition or something a family does every year as their food source to save money.

Many state that guns do kill and that they are dangerous because they have been a leading reason of deaths. I find this claim wrong because those who have killed have been people who have issues. Stated by Just Facts, “77% of the homicide suspects identified by police had prior criminal records.” Therefore, this shows that the reason why people get killed by guns is because they have something wrong with them, or they have a hatred and want to kill. For those who have a criminal record or have been to jail for something along those lines, then it should be illegal for them.

In conclusion, many ask what the benefits of taking away our gun rights would be? A majority of people will just be very angry because the government took away their right to hunt or just shoot for practice or pleasure. There is no reason to take away guns. Many people will just get frustrated with the government. 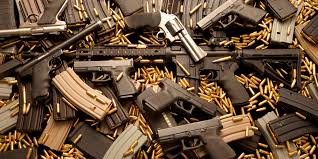 gun issues
Published on Nov 2, 2016
Report a problem... When should you flag content? If the user is making personal attacks, using profanity or harassing someone, please flag this content as inappropriate. We encourage different opinions, respectfully presented, as an exercise in free speech.
Okoboji High School

Privacy has been a major part of many teens and young-adult's lives as newer tech is being released. It should be very important that we have decen...

This is a article about gun control and how it should not be enforced.

There should be more rules on who can own a gun