The current presence of injustice toward young girls in both the United States and internationally is unacceptable and is an issue which has continually been swept under the rug. The injustice is so prevalent that we cannot choose to ignore it. A societal change must occur, we must stop ignoring it, and recognize it as a problem within global and national society, a mindset shift is needed. This, future President, is where you can use your voice to put an end to injustice toward adolescent girls by shining a light on the issues affecting them every day, working to give young girls an opportunity to become influential in society, and helping to resolve international oppression.

In March 2016, the United States adopted the Global Strategy To Empower Adolescent Girls. This legislation aims to end childhood marriage in the United States and to protect the ability for young girls to live happily and freely. The Tahirh Justice Center identified 3,000 known forced child marriages between 2009 and 2011. Many young girls are forced into marriage with the threat of beatings, shunning, and in extreme cases death. Child marriage continues to not only occur in the United States but also internationally. The International Center for Research on Women found that an average of 15 million girls will be married before their eighteenth birthdays and showed that 1 in 9 girls in developing nations will be married before eighteen. These girls are forced into a continuing cycle of child marriage, without the ability to receive education and pursue their dreams. It is crucial that you work to uphold current policies such as the Global Strategy To Empower Adolescent Girls, in an effort to stop child marriage in the United States and abroad. You must work to make education and futures possible for these generations and stop the continual cycle.

Child marriage is not the only women’s issue affecting not only our nation but the international field. Young girls around the world continue to be exposed to Female Genital Mutilation (FGM), human trafficking, gender oppression, denial of education, domestic violence, and more. Young girls around the world continue to deal with these issues and are not given a voice to speak out. UNICEF saw a decline in the overall rate of FGM but stated that “At least 200 million girls and women alive today living in 30 countries have undergone FGM/C.” These young girls are not given a choice and can face serious medical issues due to the harsh procedure. Human trafficking continues to rise. UNICEF estimated that 21 million people are trafficked around the world and that 32 billion dollars have been made globally due to trafficking. 29 countries have not joined the Palermo Protocol to fight human trafficking and you, future President, should work to encourage those countries and put an end to this widespread and horrible crime. UNICEF has found that “around the world, 59 million primary school children are not in the classroom, and the number is growing.” The majority of these children are female and are not schooled due to the belief that women are inferior. We must work to see that every child, no matter their gender, is able to receive an education and achieve their dream future. Domestic violence and sexual assault is continually swept under the rug as well, UNICEF found that “Approximately 60,000 adolescent girls die each year as a result of violence and 120 million girls in the world today – about one in ten – have been victims of rape or forced sexual acts. In the United States, an estimated 11 percent of high school girls report that they have been raped.  And globally, according to data from the Together for Girl-supported Violence Against Children Survey (VACS), one in four girls experience sexual violence before age 18 and about one in four girls’ first sex was forced.” These are just some of the most common issues faced by women every day. We cannot allow for this to continually go unnoticed.

Finally, you as President are given the ability to speak out against injustice. International relations have continually been a masculine field and this can mean that women’s issues can be ignored. You, as the President, must use your voice to shine a national and global light on the issues women face and the societal gender inequality experienced in everyday life. Even if you cannot single handedly work to solve international problems, it should not be difficult to push society as a whole towards a positive mindset change. Work to make women equal, in society, law, government, and in the minds of everyday people. You are a role model and should take on the obligation, every day, to guide the people of this great nation and should work with other leaders of nations to stop inequality. We must never stop working until women have the ability to dream about their futures, without oppression from others due to their gender. In the words of Malala Yousafzai, “When the world is silent, even one voice becomes powerful.” Well the world is silent and you, future President, must take the charge to be that voice and to work with others who have already started the process of being that voice. Help create a mindset shift and never sweep these issues under the rug. 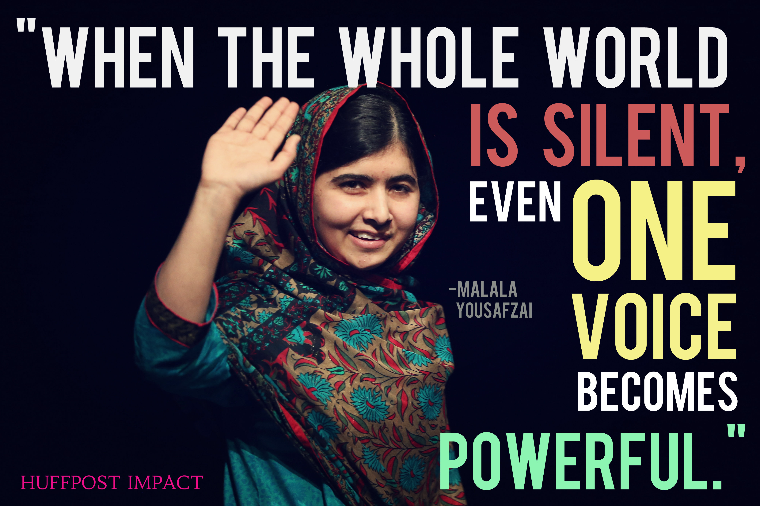 women equality international affairs social justice feminism
Published on Nov 4, 2016
Report a problem... When should you flag content? If the user is making personal attacks, using profanity or harassing someone, please flag this content as inappropriate. We encourage different opinions, respectfully presented, as an exercise in free speech.
Sacred Heart High School

Violence is a large issue in our country today, but guns are not the reason for this. There are many statistics that prove this, showing that the r...

The United States should privatize Medicare.

Some parents are disabled and then have to struggle and pay for their children's college tuition.

In my letter, I will be discussing the importance of lowering college tuition and increasing minimum wage federally and within states. I believe th...

Racism needs to stop in America because it's wrong and causes unnecessary death.

This letter challenges the future president to break down gender barriers, and to help women in their journey for equality.