This topic matters because terrorist attacks are a big threat to places around the world right now. If we aren’t attempting to stop the attacks, we’re risking lives. We need to know what to do to make our country safer when we’re threatened with the attacks and when the attacks are made.

“Social media is a valuable tool for terrorist groups,” says the article, Social Media Emerges as a valuable Terrorist Fundraising Tool from InvestigativeProject.org. Knowing that terrorists are using social media to con people into giving them money, this means we have to shut down accounts as fast as possible to stop this problem from progressing. To do this, we need people to monitor social media accounts more closely and report any suspicious behavior we might see. Ted Poe, the author of an article from CNN.com called, Time to Silence Terrorists on Social Media says that, “If the U.S. government were to shut down terrorists' social media accounts, these measures would be violating terrorists' free speech rights.” If terrorists are harming people, they don’t deserve a free speech right. He goes on to say that, “while terrorists may slip up from time to time, they are also aware that by its very nature, social media is about sharing, which means what they say can easily become widely shared.” If that’s the case, then we need to shut down their accounts to stop things from spreading.

According to a website called, SocialMediaToday.com, “The latest use of social media by African militants who attacked a shopping mall in Nairobi, was a relatively advanced psychological warfare operation. The militants primarily used Twitter to broadcast their goals while relating behind-the-scenes of the mayhem, leading Twitter to suspend the account of Somalia’s Al-Shabaab militant group after the rebels used the service to claim responsibility for the deadly attack.” This is another way terrorists are using twitter to plan attacks. These accounts have been suspended since the accident happened. This is another example as of why we need to monitor social media better.

A way to monitor social media is reporting accounts when they’re posting threats and reporting posts that seem suspicious of bad intentions. We could also suspend those accounts to put a stop to the posts and to ensure they aren’t trying to plan things. Another way of monitoring is to make sure you aren’t conned into giving money to a terrorist group. To do that you can research the topic you’re giving money to in order to make sure it’s a real thing.

A possible outcome to doing this is limiting the amount of terrorist attacks. If we can shut down accounts we can stop people from planning attacks on social media. We could stop the attacks globally and be the people to stop terrorism.

All in all, terrorist accounts need to be shut down. People are conned into giving money to terrorist groups. We need to better monitor social media accounts, and report suspicious or dangerous behavior. Now, it’s up to you as president to shut down these suspicious accounts and help the people of America stay as safe as possible on social media. 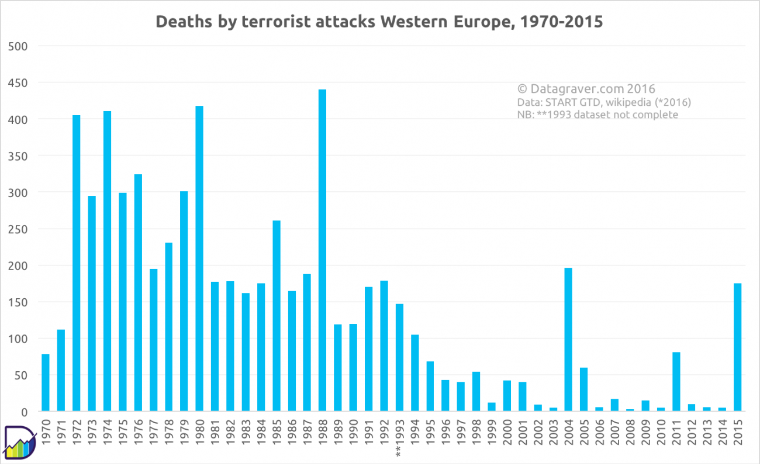 Increases and decreases of terrorist attacks from 1970-2015

terrorism social media
Published on Nov 7, 2016
Report a problem... When should you flag content? If the user is making personal attacks, using profanity or harassing someone, please flag this content as inappropriate. We encourage different opinions, respectfully presented, as an exercise in free speech.
Walter E. Stebbins High School

This year, terrorism has been a major issue in this country and I think that we should do a better job at stopping attacks. We need to think of a b...

Terrorism and how it is ripping the world apart by the second.