Immigration is one of the biggest problems in the United States. There are people who have to flee their countries because of war, abuse, terrorists, and many other terrible things. When an emigrant is looking for a new country, they look for a country that has freedoms and job opportunities so that people can care for themselves and their families. The United States is a country that supports these ideas, yet, people have a very difficult time getting into our country. With visas and borders, it takes a very long time to get into our country. There has to be a solution to this problem, so that everyone can live the “American Dream”.

Immigration.com states that “the visa petition can take up to 8 months to be reviewed by the USCIS and being sent the paper work can take another one to three months. Scheduling an interview can take two to four months. If the applicant is already in the US, the whole process can take up to one year, and this timeline may be longer for people applying from outside the US.” Even after the over a year process to get a visa and apply, you could still be denied and then have to do the process all over again, and maybe you will get it next time. As you can see, it takes people that are in need, and sometimes don’t want to be involved in a war in their homeland possibly 1-3 years to get a visa and apply for citizenship. I do not agree with this method that the U.S. uses to let people in our country, it can take 1-5 years if you’re denied and you have to keep trying.

Some may not agree with what I am saying and say there are illegal immigrants in the U.S. and they are taking away our jobs. But, according to kauffman.org, “Immigrants were almost twice as likely to start businesses in 2012 as native-born Americans. 28.5 percent of new entrepreneurs in 2014 were immigrants, which is up from 13.3 percent in 1997. About one-quarter of the engineering and technology companies started in the United States in between 2006–2012 had at least one key founder who was an immigrant.” So this proves that Immigrants to America actually create more jobs then natives do. So there should be no reason to be angry at them for taking away jobs, if they are actually creating them. I personally think that immigrants are fine in our country, since they create more jobs. The reason there are illegal immigrants in my opinion is because they can’t wait 1-5 years or more to get into our country. If there was a way to shorten the time you have to wait to come into the U.S. there would be less illegal immigrants.

So Mr. or Mrs. President, you may be wondering how to fix how long it takes to get into America legally. Well, we have to do something to make it easier to become a citizen. For starters, the eight month process of getting a visa is way too long, there has to be an easier way to manage that process. Secondly, it should be easier to legally become a citizen, people get denied and to sign up for an interview can take 1-2 months. The process is way too long, especially since there are thousands, if not millions of Emigrants coming from different places trying to come into America. There should be more jobs in this industry so that way the time in between can be shortened. According to cis.org, “More than 4.4 million people are on the legal immigrant visa waiting list according to the State Department's annual tally. That is 100,085 more people waiting for legal immigrant visas than at the same time last year. Ninety-eight percent of those waiting have been sponsored by a family member in the United States.” The numbers of people trying to get a visa and trying to apply for citizenship is going up every year

Mr. or Mrs. President, will you let those numbers keep rising, or will you take a stand and change it for the better? 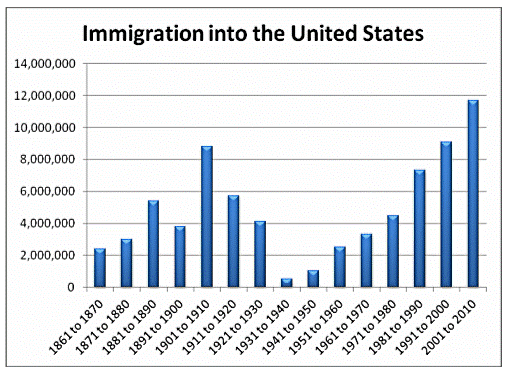 immigration
Published on Nov 4, 2016
Report a problem... When should you flag content? If the user is making personal attacks, using profanity or harassing someone, please flag this content as inappropriate. We encourage different opinions, respectfully presented, as an exercise in free speech.
Walter E. Stebbins High School

Bullying that can lead to suicide or self harm is a serious topic that needs to be stopped.

The letter that I wrote is based on immigration and is to the next president. In this letter I will describe my views on immigration, why it's impo...

This talks about immigrants and how we need to help them.

I think we should allow some Immigrants to come into the United States for jobs and or school.

Due to the Central American turmoil the amount of immigrants feeling to the United States is increasing rapidly including youth and children travel...

Reasons we must stop illegal immigration.

In Central America many children are fleeing violence and abuses in their countries.