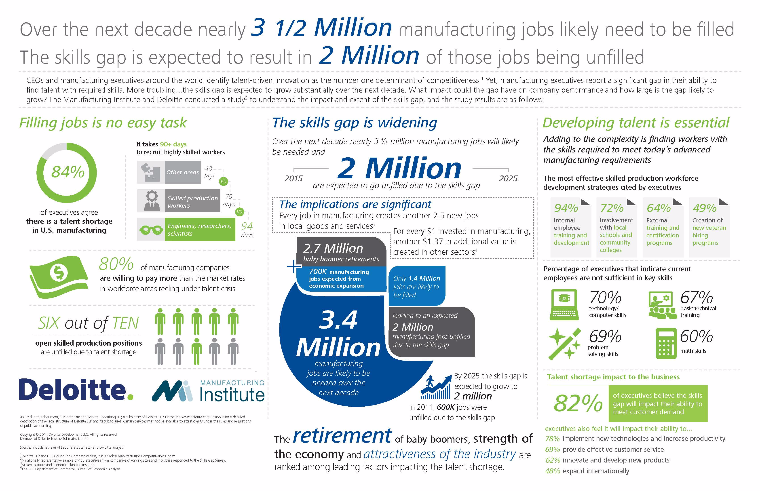 “... So far [in 2016], for every job opening, about 30 people apply on average. Of those applicants, less than 20% meet the qualifications for the job, according to Corporate Executive Board, a research group” (Gillespie). This is a major problem. As a country, the US now has millions of job openings; however, we do not have enough skilled workers to fill these jobs. The problem is our economy is changing from producing goods to being service based. To address the growing number of unskilled workers who are unemployed or underemployed, the government should provide incentives for post-high school training through trade schools and on-the-job training programs that give people skills needed to be successful in today’s economy.

Manufacturing and other unskilled labor jobs are moving overseas to countries that are emerging, such as China, India, and Mexico, or being taken over by automation. Our economy is already industrialized, which means it is no longer profitable to manufacture all goods here. While some may argue that companies should bring back those unskilled and manufacturing positions for American workers, that makes little sense. Companies would lose profits, which would lower the number of jobs available, which would increase the price of goods. For the average American, it is not affordable to do this. When goods the average person needs, like toilet paper and toothpaste, go up in price, demand for those products go down. People will try to stretch what they have to make it last longer. Companies are then not selling as much, so they lay off workers to prevent losing more money. When people lose income, they don’t buy as much, continuing this vicious cycle. While manufacturing jobs have decreased, service-based jobs have drastically increased. “In place of those missing manufacturing jobs, the health-care and social assistance industries have nearly doubled in size, from 9.1 million in 1990 to just over 18 million today, according to the Bureau of Labor Statistics” (Wilson). To take part in this service-based economy, people need new skills. As our economy changes, so should the way we think about skills in the workforce and the training to gain those skills. We need to go forward, not backward.

There are still manufacturing jobs today, but these require more skills and training because of technology used in the manufacturing process. According to Deloitte Analysis based on data from U.S. Bureau of Labor Statistics and Gallup Survey, “Over the next decade, nearly three and a half million manufacturing jobs likely need to be filled and the skills' gap is expected to result in 2 million of those jobs going unfilled” (qtd. in “The skills' gap in”). Skills for these jobs can be shown through certificates or licenses that do not have to be obtained through a traditional four-year college route. In fact, many of these skills can be learned in several weeks or months through a trade school or done while training on the job. These avenues are too often overlooked. With more qualified workers, 2 million more good-paying jobs that could be filled. There must be a shift in our culture to utilize many of these opportunities for people who find that a traditional college approach is not right for them. There are other ways to gain much-needed skills.

Overall, our federal and state governments should invest in incentives and opportunities for individuals to gain skills that will translate into direct success and employment in the workforce. Teaching people skills allows them to support themselves and their families in skilled jobs, which pay more. More income and less unemployment lead to stronger families, less crime, and fewer social problems. It is time to invest in our people for the future!

Wilson, Reid. "Watch the U.S. transition from a manufacturing economy to a service economy,in one gif." The Washington Post3 Sept. 2014, https://www.washingtonpost.com/blogs/govbeat/wp/2014/09/03/watch-the-u-s-transition-from-a-manufacturing-economy-to-a-service-economy-in-one-gif/. Accessed 31 Oct.2016.

scholarship education economy job market
Published on Nov 4, 2016
Report a problem... When should you flag content? If the user is making personal attacks, using profanity or harassing someone, please flag this content as inappropriate. We encourage different opinions, respectfully presented, as an exercise in free speech.
Portland Middle School

These letters show what students are passionate about in our society, and they are speaking out about them to make a difference!

It is unfair that certain people are discriminated against, and I believe that should change.

"They are expected to be content with what they have and trained to not question why they are faced with impossible circumstances, while others are...

The law I see that is unjust is abortion and there is more meaning than the debate over choice and life.

Student Athletes With No Study Time

There is not enough time for student athletes to invest into studying for school outside the classroom.

Gun Control and the Economy

This letter to the president discusses gun control and the benefits of the gun industry and being able to own a gun.

The children of our nation are confined to certain education standards based on skin tone or socioeconomic status. It is up to the next president t...

Let Them Come In

Undocumented immigrants come for work to support themselves and their families. They impact the U.S. because they are a big help to our economy.