Although we as a nation have come very far in reaching equilibrium amongst races, there are still things that need mending. Imagine a world where the Civil Rights Act was not passed. Picture that whites and blacks were still segregated. And even though drastic measures aren’t taken as they were before, African Americans are still racially oppressed politically, socially and economically. African Americans are not only put in dangerous situations that involve violence, but they are also being discriminated against. Mr./Madam President you must sign into legislation more specific laws that defend the rights of African Americans.

African Americans have always been discriminated against, but as said before, it seems that measures have taken a more drastic and dangerous turn. The discrimination that African Americans have been facing have been heightened and have lead to things as gruesome as murder. For example, Philando Castile, an African American who’d lived in Minnesota, was shot in his car sitting next to his wife with his young daughter in the back seat. This was an unjustly act simply because the man had informed the officer he’d had a firearm and was reaching for his wallet, and was just shot in his arm. There’s no doubt that the story would’ve been spun if his wife, Diamond Reynolds, hadn’t been recording. His story is just one of many. As of lately, there has been a drastic increase in African American men’s death. These many now deceased men are what inspired a popular hashtag known as Black Lives Matter. All over social media the hashtag was trending not only by African Americans but by other races who’d finally seen the wrongness African Americans had been experiencing for years.

Although we as a nation have come very far from segregation and intense racism, there are still things that need mending. African Americans have always been seen as inferior, but it seems as of lately they have been receiving intense discrimination and violence. Mr./Madam President you must defend the rights of African Americans because they too are more than just three-fifths of a person. If all humans are created equal why are African Americans seen as three-fifths? 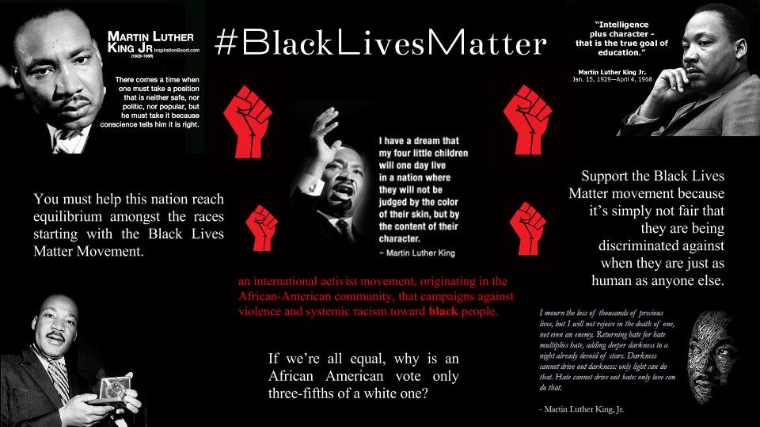 blacklivesmatter racism violence discrimination
Published on Nov 8, 2016
Report a problem... When should you flag content? If the user is making personal attacks, using profanity or harassing someone, please flag this content as inappropriate. We encourage different opinions, respectfully presented, as an exercise in free speech.
Cedar Valley Middle School

Persuasive Letter with reasons to the gender pay gap

Dear Mr./Madam President, Legalize Marijuana. This issue has been going on for over a century, and you must take action immediately. Change ...

Why we must make College Free

Reasons why the President must make college free.

Police brutality is increasing day by day and we need to take action.

Dear Mr/Madam President, Have you ever felt like something was missing? A...

Why we must remove standardized testing

Reasons the next President should remove standardized testing in the American school curriculum.

People are changing to renewable resources to pollute the world less

When teens get pregnant there first reaction is to get a abortion because they feel like their in this alone, they're not ready to care for one yet...

Gay couples should have the same rights to adopt a child, as long as they pass all of the background checks as a straight couple and are prepared t...

Sex education should be taught

My video explores the reasons why we should aim for stricter gun control legislation and the collateral damage in urban communities resulting from ...