The Criminal Justice System is inadequate because of wrongful convictions. One example is the case of Bobby Johnson who was sentenced in 2007 and wrongly convicted. He spent nine years in prison for a crime he did not commit; it turns out that detectives did not even have evidence linking him to the crime (Huffington Post, September 4 ,2015). A law enforcement official should not be allowed to put a citizen of North Carolina in prison just because of a gut feeling. You should provide evidence so citizens do not spend unnecessary time in prison. Another suspect was falsely accused in Wilmington where Mr.Small was sentenced to 28 years in prison. When he had a second trial he was proven innocent; the judge said “I don't know if Mr. Small did this or not. Whoever did this is a monster." He added, "What I'm here to decide is, did he receive a fair trial? ... It is more than abundantly clear that he did not” (The Big Story, August 11,2016). If the Criminal Justice System gave Mr. Small a fair trial he would have had 28 years of his life back. The NC Criminal Justice System should be cautious in how they prosecute the accused because many people’s lives are affected by wrongful convictions.

The NC Criminal Justice System is insufficient because the system is biased. In previous years, courts have been biased based on race,  gender, and social class. There has been more rage sparked due to race such as the cop against the average black male. Evidence of a biased Justice System is shown through a statistic that African Americans are incarcerated at nearly six times the rate of whites according to the NAACP.This mean there are more African American sent to jail than whites. This shows that even though they may commit the same crime whites get off with less of a punishment. Research shows that about 14 million Whites and 2.6 million African Americans report using an illicit drug (NAACP). Even though whites use more illicit drugs than blacks, studies show that blacks are imprisoned for drug usage more than whites are. Also what you wear and how to present yourself in court may reflect the outcome of your trial. In one trial there was a guy with many tattoos and one of his tattoos was a Nazi sign and he was asked to cover them up. “A Las Vegas judge ordered a courtroom makeup artist to conceal a neo-Nazi’s provocative head, face and neck tattoos after potential jurors admitted they wouldn’t be able to fairly judge the case” (NY Daily News). If the Criminal Justice system was as unbiased as they proclaimed then the neo-Nazi would not have to hide his Nazi tattoo just to have a fair trial.vThe Criminal Justice System must improve on being unbiased.

When it comes to the prisoner’s health care there are many concerns such as their mental state and their hygiene. Many prisoners only wash their clothes once or twice a week .This is important because it relates back to their hygiene;  having good hygiene helps your body to feel better and you are less prone to getting infections or diseases that can spread to the rest of the inmates that lead to more problems in the prison. Having mental illness and being in prison is also a very big concern."A news report quantifies the experience of many states, where people with mental illness end up in jail or prison after states cut treatment dollars." We personally believe if you have a mental illness you should be getting help In a mental hospital not in prison. According to the NAACP, "About $70 billion dollars are spent on corrections yearly." So if the Criminal Justice System carefully analyzed each case and trial and also convicted fairly, they would not have to use so much money to correct what they did wrong. They could use those billions of dollars to help prisoners with mental illnesses so that they get the correct care they need.

We have seen various problems in the way our Criminal Justice System in North Carolina is coming together. With these problems we are going to provide solutions.The first problem is wrong convictions. Our solutions are before you convict a citizen of North Carolina you must have solid evidence and not just bad vibes from that particular person.The second problem is a biased judicial system. A way you could improve this is by doing a blind trial or not knowing the race or gender.  This will will be beneficial because you will not be biased when a person shows up to court based solely on the way he looks.The health care is another problem; prison should be able to provide a prisoner with the essentials like toothpaste and other hygiene necessities. Also if you have a mental illness you should not be in prison; you should be getting professional help and if you have been through a treatment program and still have not improved then you should receive your sentence. With your help, we think we can improve the Justice System in North Carolina. 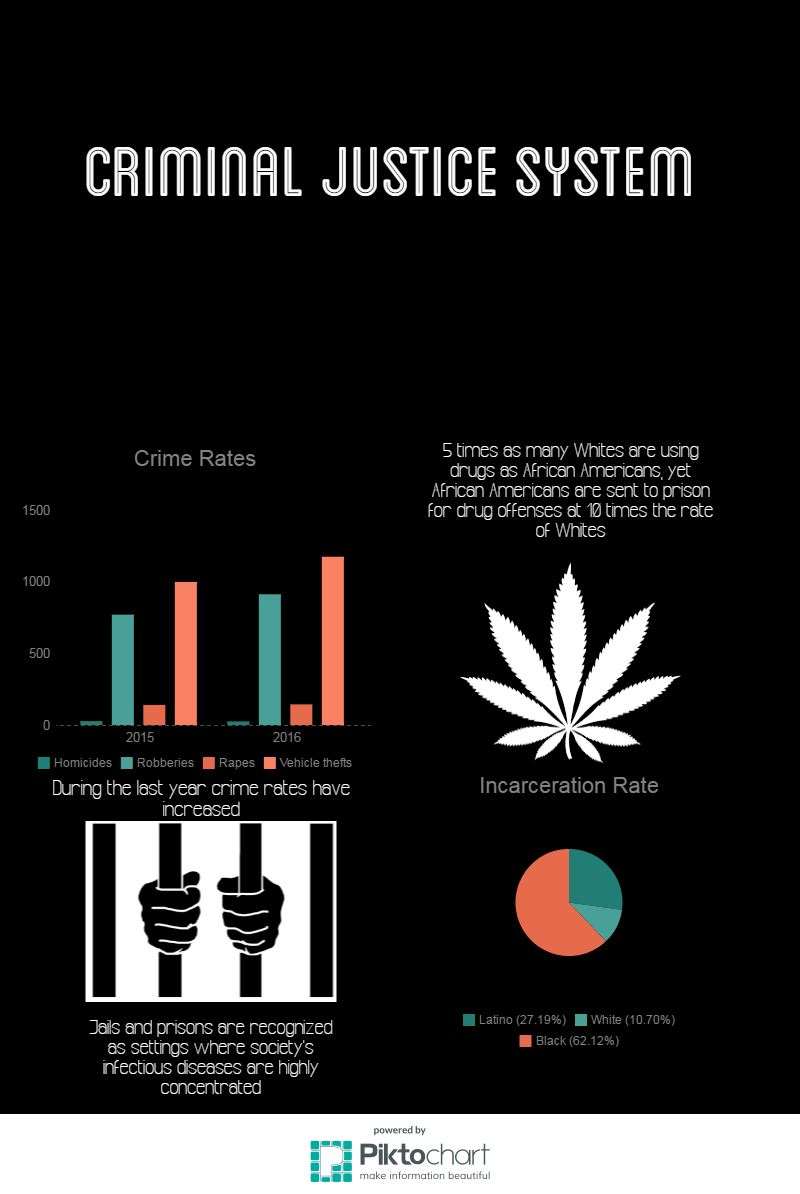 justice system criminal justice system
Published on Nov 8, 2016
Report a problem... When should you flag content? If the user is making personal attacks, using profanity or harassing someone, please flag this content as inappropriate. We encourage different opinions, respectfully presented, as an exercise in free speech.
Wake Young Women's Leadership Academy

Criminal justice is not equal for all races.

Donald Trump and the Death Penalty

Donald Trump has expressed his opinion many times regarding capital punishment, and here's my response...

Dear Next President: This infographic illustrates many examples of the inconsistencies and bias in our criminal justice system. As the next preside...