The United States faces an astronomical amount of issues on a daily basis and the fact that we have stayed afloat tells us how strong we really are as nation when we come together. From the 9-11 terrorist attacks to the latest of disasters with Hurricane Matthew, we have come together and fought through these tragedies. The issues I speak to you about today however, have always been a constant threat to the unity that makes the United States the strong nation that it is. The tensions due to police brutality in our country have pitted our people against our police force and some of the oppressed have taken their frustrations nationwide with most the controversial way being the kneeling during the national anthem. The way we act together following tragedy should resemble the way we treat each other every single day to avoid any undeserving American to be treated unfairly.

The notion that the police has played the largest part in the killings of young black kids is untrue. The notion that the police have only been involved in the killings of black kids is also untrue. While these two statements may seem to counteract one another, they prove two important points. While the existence of a “bad cop” is still commonplace, they don't account for the entire police force. The percentage of black on black homicides is 93%, and white on white homicides stand at 84% as of July 13, 2016. Now while many will do what a divided nation would do, pointing out the discrepancies of black on black and white on white crime rates, the more troubling truth is that kids are simply killing kids. The families of these kids are left heartbroken and feel a type of anger and sadness that others have no idea about. But while this is true, cops also have families. As I said before, just like any troubled person, some cops simply have the most awful intentions. But I don't think that number is as large at all in comparison to the cops who show up to work everyday, risking their lives for a paycheck that hardly measures up to their sacrifice. It is of the utmost importance that people try to recognize what is true and is not, the facts that we should be talking about, and that there are outliers in these situations that blind us into perceiving an entire group as that of much fewer individuals.

“I am not going to stand up to show pride in a flag for a country that oppresses black people and people of color.” Those controversial words were spoken by Colin Kaepernick, quarterback of the San Francisco 49ers. In his multiple interviews, Kaepernick speaks with truth and dignity for the uprising that he has formed over the past few months. He has a valid point and has all rights to do what he has done. However, I feel his actions having to do with the National Anthem are what I disagree with. In our country, we have endured some of the toughest situations imaginable as I stated in the previous paragraph, overcoming and still battling others. But to not stand over this issue is to in essence, believe that our country was perfect before all of this. If we stood as one before, the only way we get through this now is to stand even taller together. In fact, we have seen other athletes in other sports start to call for this unification. The athletes of the NBA for example, have began to lock arms with their teammates and even opponents during the anthem. What could signify a nation standing tall in the face of turmoil as well as this? But we should not only show what we believe we need to do, but talk about it. Many people find this type of conversation to be uncomfortable, but I feel that if we start listening to each other in our communities, issues like the ones we face today would bring us one step closer to unified nation. 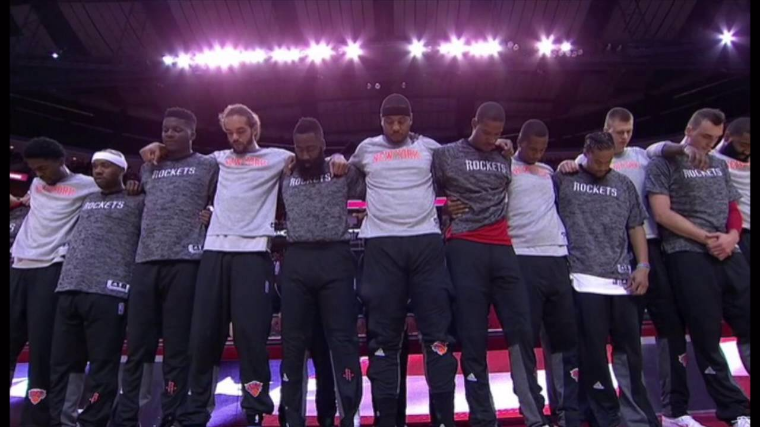 police brutality national anthem
Published on Nov 7, 2016
Report a problem... When should you flag content? If the user is making personal attacks, using profanity or harassing someone, please flag this content as inappropriate. We encourage different opinions, respectfully presented, as an exercise in free speech.
Allen Park High School

The Second Amendment was written for a reason. Taking away our guns in unnecessary and unlawful.

Reuniting the United States through equality and peace.

The ever growing epidemic of sexual assault on college campuses. What are we doing wrong?

This letter discusses the prevalence of rape culture on campus, primarily in fraternities, and how to address this issue.

College tuition is depriving students of the real education that they need. The price to go to college is increasing each year and we need to do so...

America needs to stop mislabeled food before it's to late!

How A Parents Drug Abuse Can Effect Their Children

Parents who abuse drugs don't pay attention to how they are hurting their children physically and emotionally. This can lead to the child having pr...

Women are always blamed for the horrific conditions they have been through and often fear to tell others their situation. In my letter, I explain w...

I am writing this letter because this has always been an issue and it needs to be stopped.

Police Brutality is a Problem!!

Police Brutality is destroying the lives of people in the world who didn't do anything.