People are getting upset because Colin Kaepernick, NFL quarterback, is kneeling while the national anthem is playing . Kaepernick decided to take a knee with his arms folded because he thinks the national anthem is racist. Kaepernick has gotten a lot of other NFL players to follow in his lead. Some players are losing their starting position because of this situation and some people are even getting fired. I would like you, as the president of the United States, to say that if Kaepernick is part of the United States, he should stand and show respect for the playing of our national anthem.

Some people say Kaepernick was not in the wrong . They wonder,  since when is kneeling a sign of disrespect? Well, it's an issue now, because everybody always stands for the national anthem to show respect. When Kaepernick took a knee, people were mad about him showing disrespect.

I believe Kaepernick is in the wrong because soldiers fought for our country and fought for everyone to have freedom and people are being disrespectful by kneeling. I saw a soldier on the internet  who had lost both his legs and who is in a wheelchair. The caption said, “Thanks Kaepernick. Thanks for standing for your freedom,” and another that said "Kaepernick, have you thanked a vet lately for disrespecting our flag?"  It is wrong for people to feel that way about this situation, so that's why I believe he made a poor decision.

Kaepernick should either be fired or get a serious fine because it makes the NFL look bad for allowing this to happen. Why is it okay that Kaepernick still gets to play while other people who knelt are being penalized? Kaepernick is playing the racist card and our flag is not representing that. It is representing freedom, justice, and independence. Kaepernick made a poor decision.  I would like you to state your opinion about this situation. 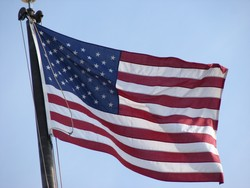 football national anthem flag
Published on Nov 8, 2016
Report a problem... When should you flag content? If the user is making personal attacks, using profanity or harassing someone, please flag this content as inappropriate. We encourage different opinions, respectfully presented, as an exercise in free speech.
Evart Middle School

In this letter, it explains why it's bad to kneel or put your fist up during the national anthem.

Police are being targeted by groups of people and their families are left to suffer.

Our government has more import things to worry about

The national anthem is something that some people have begun to protest. These people, mostly professional sport players, are no longer standing a...

This essay is a discussion of how the National Anthem Protest has affected everyday people.