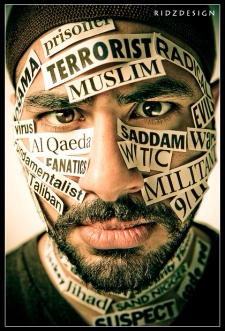 Since the contemptible day of September 9, 2001 a poison has been spreading throughout the veins of our country. A poison that destroys families, broods hate, and is strengthened by ignorance. This poison is known in general as racism, but has become so potent, it has received its own name. Islamophobia.

Growing up surrounded by children of many different backgrounds, I found that I have always known this; people cry- people break bones- people laugh- people fall in love. We all hurt and feel. Skin tone, ethnicity, religion, wealth, race, or anything else that is known to divide people is insignificant when forming relationships, studying, achieving goals, growing up and just living. We are all the same. We are all self-aware.

As a species, humans routinely believe themselves above others, whether it be animals, or other humans, younger/older, darker/lighter, shorter/taller, it does not matter. People try to find a way to be better. But another even more “human” trait is compassion. We demonstrate this from a very young age, as examined by Sara Hrdy in Comes the Child Before Man: Development's Role in Producing Selective Variation,"Human infants voluntarily proffer food to someone else, even selecting precisely the item a recipient is most likely to enjoy." According to Hrdy, we subconsciously want to help and make others feel better, so why do we find ourselves looking to blame an entire religion for the acts of so few?

For the sixteen years, Dearborn, Michigan has been the city I call home. I am grateful to have been presented with the opportunity to live in this city- it was there I learned how to recognize racism, and understand the entirety of its ability to hurt, destroy, and segregate. I experienced it for myself, and at points found myself without the words to elucidate my anger and frustration at the ignorance that only lends to fuel this fire. But I have now found the words to dispute it.

Terrorism. Immediately a very strong emotion is aroused, and rightfully so. Terrorism is a profound problem the world faces right now. I wish to make it clear that in no way do I wish to undermine this threat. I understand the preeminence of this issue, and I wish to see it dealt with correctly, but we cannot assume terrorist and Muslim are synonymous. In fact, if it had not been for recent events, they would not even be used in the same sentence.

Islam is a religion of peace. It is a religion much like Catholicism. I was born into a Catholic family. I was baptized Catholic and later began going to church without my parents to continue to learn about the religion. I have read the Bible, and I have also read the Qur'an. Three times. And nowhere in it does it condone violence, murder, or malintent. Nowhere does it teach to hate those that do not follow the same faith. Both of these major religions teach peace and acceptance and to love one God. I am not aligned with any religion, and so I have very little biased when I present these facts. When first introduced to the similarities of these two religions I instantly researched to validate it for myself, and the similarities are uncanny. But truthfully, this should not be important. The way someone is treated should not be dictated by the religion they choose to practice.

Another opposition to Islam that I must address is Isis, and Al Qaeda. These recent radical groups threatened and continue to threaten people everyday. It is a misconception that these groups only threaten America too. A blatant example is the attacks on Paris, but a less publicized example is the thousands of families in the Middle East that are being torn apart and annihilated by this masochistic powerhouse. Now I do not claim to be an expert on the details of this war between the extremist groups and the countries fighting to eradicate them, but the deaths overseas that are not accounted for and the deaths we have grieved for here at home speak much more than I ever could.

The graph below depicts the countries with the most terrorist attacks. The US does not even make the list. I do not show this to undermine the deaths our country has seen, but the highlight my point that our country is filled with people who are not filled in with the whole truth.

I do not hold the answers to uniting our world against the evil that humanity houses, but I do know that the truth is not always told. Throughout history people have tried to place blame on others to help cope with tragedies, but this only leads to ignorant hate. Just because those responsible for the deaths our country has suffered say that they align with the religion of Islam does not give others a right to segregate an entire 1.6 billion people. This misconception that all Muslims are terrorist is constantly being fueled by the media. When the news instantly refers to a murder as an act of terrorism because a person of Middle Eastern decent commits it and then refers to it as murder if a man of any other ethnicity commits it is part of why there is such a fallacy towards these people.

Now, I am not in a position that allows me a lot of sway over others' opinions, but you are. It is your responsibility as the new president of the United States to defend the citizens of this country. Citizens that follow the law and contribute to society and practice Islam are no different from anyone else and deserve this as well. I understand that not everyone can be made to see reason, but with your political position, you can lead more people to the truth and away from hate. This is a step that must be taken and I hope that you find it to be as crucial as I do and act upon it accordingly.

media terrorism islamophobia racism racial divide
Published on Nov 7, 2016
Report a problem... When should you flag content? If the user is making personal attacks, using profanity or harassing someone, please flag this content as inappropriate. We encourage different opinions, respectfully presented, as an exercise in free speech.
Allen Park High School

Inequality is a problem overlooked in our country

African Americans don't deserve to be seen as a separate category than all other races. America needs the people as a whole to face challenges and ...

LGBTQ Rights and the discrimination we still face.

The government should enforce laws on gun control to protect the citizens of our country.

A letter to the next President about the issue of gun control.

I am writing this letter because of some of the problems in the United States concerning immigration. Lots of people are worried about what would h...

Mental health is a serious problem effecting today's population. There needs to change.

The Struggle with Poverty

This letter is about how terrorism and how it should be fixed.

Terrorism and how it is ripping the world apart by the second.