When you were younger did you think you could change the world? Let me explain myself; I’m involved with youth everyday. I want to change the world of the students around me, so I ran to be junior class president at Spanish Fork High School. I wanted to see development in my community, so I ran to be an officer in the youth city council. I’m an assistant manager at a local restaurant; I work with youth everyday. I get to see them grow and get better at their jobs. I see so many youth down the halls of my own high school who are changing the world today. I can peer through the gym and see a sophomore practicing frequently; trying to perfect his game by shooting the perfect free throws. A senior, and the vice president of youth city council, consumes countless nights trying to find ways to better our community. A junior, cancer survivor, spends hours a day prepping for the ACT so he can be a doctor and transform others lives. These peers that I’m involved with have all their own ideas on changing the world. Do government officials feel like we are too inadequate to have an influence on government? Are our ideas for the future discarded?

Simone Biles, an American Olympian gymnast of 19 years old, tied the Olympic record for gold medals of any gymnast in American history for one Olympic year. Mark Zuckerberg, the creator of Facebook, was 11 years old when he started getting tutored on computer programming. While a sophomore in college, he created Facebook. His net worth is now over 55 billion dollars. Michael Sessions, an 18 year old mayor in Hillsdale, Michigan proves that millennials have a lot to bring to the table. Mayor Sessions says, in his interview with Keith Olbermann responding to what he thinks a mayor's responsibility is, “I think the mayor should be out there, you know, communicating with people. He should be out there talking to city employees. He should be out there, you know, he’s got to develop great relationships with the people of the City of Hillsdale.” Mr/Madam President, I know it’s easy to overlook our generation, but please don’t disregard us. From my classmates I see engaged in their passions to the millennials in the spotlight, we want to influence the world for the better. Some citizens of America get so relentless on proving racism and sexism with the campaigns of “Black Lives Matter” or “He for She” when they neglect another powerful oppression: ageism. Mr/Madam President, the upcoming generation should have unequivocal representation in government.

America has varying age limits to be able to run for a certain position in government. In fact, it is the Constitution that outlines all these ages. To run for the House of Representatives, it is expected that you should be of 25 years of age. To be a Senator one must be 30 years of age and to be the President is 35 years of age. I believe that every American should be able to run for any government position at the age of 18 years old. Many people will argue that we should not get that opportunity for congress or senate at 18 years of age. Americans today tend to believe that since we do not have years of experience of working in the political field that we are too inexperienced to be in government. Those arguments are valid; however, our generation has had the most life experience out of anyone yet. Simply because of the media we are exposed to so much more. I was a one year old when the horrific day of 9/11 struck our country. My generation was born into a war with the Middle East. Christopher Jusuf, a political author wrote, “The Global War on Terror now stretches into the majority of the lifespans of anyone under 30 years old without a foreseeable end in sight. Hypothetically, a child born after 9/11 will be eligible to be sent to Afghanistan in 4 years.” Our generation was born into an American crisis. We have the debt of our upbringing on our shoulders. We have to fear every night that a terrorist attack could be a reality. We aren’t inexperienced; if anything we have experienced too much.

Although none of them have ever said so directly, government officials have often given me the impression that we shouldn’t have a place in government at 18 from lack of education. That concern is legitimate. On the other hand, a statistic from Paul Augone, an author for his new book All Groan Up states, “Millennials are the largest generation at over 85-90 million people in the US, and are the most educated generation in history.” Mr/ Madam President, we value education so much that we are begging to go to college. While I sit in my chemistry class, students in all different grades are raising their hands frequently just so they can learn more. With the touch of our fingers, we can access the internet and keep learning. We strive to find out more; we are the generation that never stops learning. Mr/ Madam President, please don’t assume that our intelligence capabilities are slim. That statistic that Paul Augone quoted, as uplifting as it is, is also concerning. How come 90 million millennial Americans aren’t being represented? In my US government class, we were learning about the Virginia Plan proposed by James Madison. I felt honored to be a part of a country where the House of Representatives was built, so every American got a voice. So can you explain why 90 million American millennials are not getting the chance to be heard?

Mr/Madam President, don’t satisfy the negative millennial stigma by relinquishing us of the bonds of responsibility. Instead utilize us to benefit our great country that our ancestors worked so hard to build. Since I am involved in youth leadership programs, I feel like it’s my obligation to hearken to the youth’s concerns and new ideas. I hear youth talking about better education, gun control, police brutality, global warming, and they have some real life solutions to those very troubling problems. At my school of 1,400 students, I hear so many bright ideas to solve our country's issues. Could you imagine attentively listening to the entire 90 million of us?

The big question is: how are we going to get the result that we need to better our country? With my continuous research, I have found a way. I know what I’m about to ask for is insane; innovative if you will. We should make an amendment to the Constitution altering the age requirement to run for a government office. This amendment needs to include the younger generations. It should state that at 18 years old, Americans can run for any government position; including president, senator, or representative. It’s going to require a ⅔ majority vote in the House of Representatives and the Senate. This amendment idea isn’t something new. In fact, a historian referring the 26th Amendment says, “The long debate over lowering the voting age in America from 21 to 18 began during World War II and intensified during the Vietnam War, when young men denied the right to vote were being conscripted to fight for their country.” This amendment was a huge change that benefits Americans still to this day. This allowed Americans at 18 years old the right to vote. I’m asking for another amendment where 90 million Americans will have a voice on the problems they face today. This amendment is something bigger than ourselves. Please help show me that ageism isn’t real. Please show me that the colonist famous slogan,“no taxation without representation” is valued.

Mr/Madam President, give a voice to the future teachers, engineers, scientists, politicians, doctors. Mr/Madam President, I want to ask you again. Did you ever you think you could change the world? You are also probably wondering about my title in this letter. I want us to think. Is it time for us millennials to run away from America's problems or it is time for us to run for government? 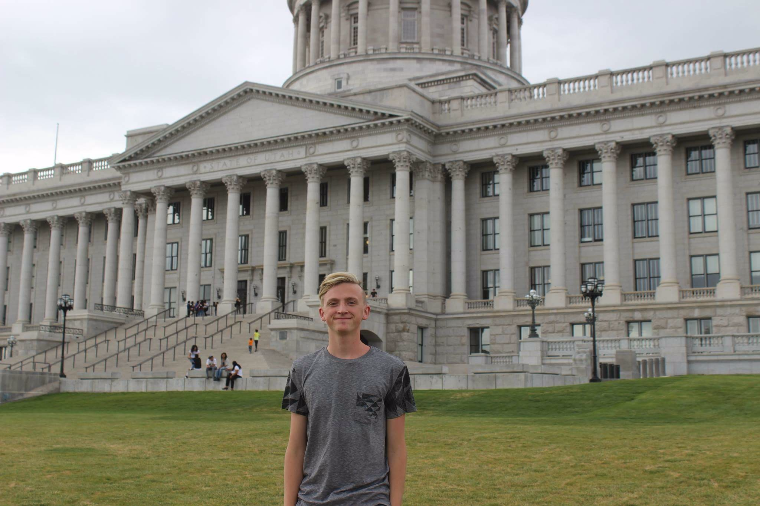 government millennials
Published on Oct 24, 2016
Report a problem... When should you flag content? If the user is making personal attacks, using profanity or harassing someone, please flag this content as inappropriate. We encourage different opinions, respectfully presented, as an exercise in free speech.
Spanish Fork High School

This is a letter about obesity.

A letter from Journae Jones.

Government Entitlement Programs are being taken advantage of by the wrong people. It is great to have in many ways for the people who are physicall...

Keep "Under God" in the Pledge of Allegiance

The words "under God" should remain in the Pledge to display our country's Christian history.

College needs to be cheaper for people to attend to. I believe that the next president can do something about this.

The Massive Expense of College

The cost of college is very expensive for middle class students. This letter explains that if the government cut college funding, colleges would lo...