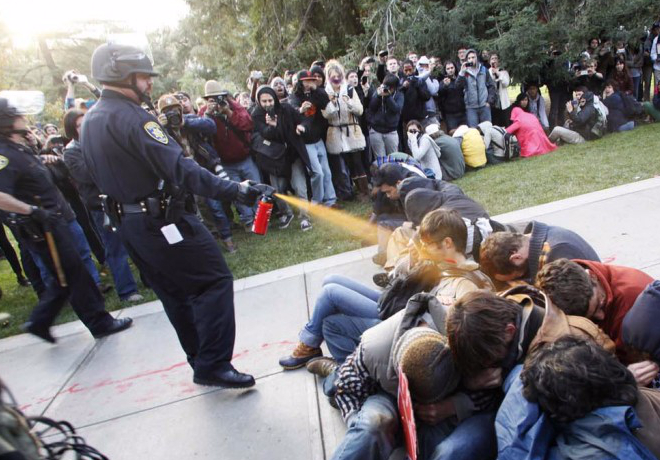 No matter what has been said in the presidential election process up to this point, I think that police brutality is a big problem in our country. Police are abusing their power and killing people for little or no reason. Families are being affected by the police killing their loved ones. This use of excessive force must stop.

People are getting killed for unnecessary reasons. According to an article entitled KilledbyPolice, about 700 people have been killed this year. And a Washington article says that the police killings have gone up by 6% since last year.

In the article Wagingnonviolece, the author says “she is afraid to call the police.” According to Popular Resistance the mother of Nicholas Heyward says “ my son meant the world to me”, ” It’s such a painful feeling that never goes away”. Families are getting destroyed because they are losing their loved ones. The worst part of all this is that some cops justify it as “defending themselves”. Which sometimes is the case but sometimes it is not and it is unfair.

According to a National Review article: “The chances of an innocent black man being gunned down by a police officer is vanishingly small.” In the article Tribune242 it says "officers are just defending themselves”. In Wesley Lowery words he states that even though whites are mostly killed by police, African Americans are 2.5% times more likely to get shot. My point by this is many people think police brutality isn’t a problem but it is. Cops need to be thinking with their head not with their guns.

I propose for cops to get extra training on when to shoot. This will be very effective for law enforcement. Law enforcement needs extra training because they are shooting at unnecessary times. Law enforcement takes out guns at times that are not needed. Police officers are not being trained as well as they should. Why should a police officer be allowed to pull a gun on a jack in the box employee because they are not doing their burger fast enough, as reported in The Free Thought Project article. That is exactly my point about police officers using excessive force.

police brutality
Published on Oct 4, 2016
Report a problem... When should you flag content? If the user is making personal attacks, using profanity or harassing someone, please flag this content as inappropriate. We encourage different opinions, respectfully presented, as an exercise in free speech.
San Marino High School

Women should be able to choose whether to bring life into the world or not. It is their body and their future.

Help Us, We are Dying!

This letter is about the police officers abuse against Latinos and African Americans.