For me, growing up in the twenty first century- while our country continues nearing its 250th birthday everyday- I find myself fearfully pondering the same rights which our founding fathers sought for. We are a country that has come very far, and in a remarkably short time when you think of it. Yet, we still face many of the same problems and questions that were supposedly solved upon our founding. The one currently of my concern, is my right- and the right of every individual- to think, believe and speak freely. The amendments were put in place to protect private citizens from their own government. I say this with no ill will toward our civil servants who so dutifully protect our country's future, I say this only with honest caution. While dealing with worldwide issues, the stress of an entire country upon the shoulders of yourself and others, it is no doubt easy to get lost in the how, forgetting the why. Hence why sometimes the people- your people- need to stand up and give their government a little reminder. A reminder that this country was founded by the people for the people, that the United States serves its citizens, not the other way around. This has worked many times before, the prodding of citizens nudging our behemoth country the way we feel it should go. But what happens when the rights granted to us by the amendments are threatened? What happens when our ability to nudge and speak up is cut off? What happens when the right to freedom of speech, press and just overall expression is strangled? What happens then is our way of life hits some shady territory. We come across an internal threat that closes in on our beliefs. What, after all, is the land of the free without our free speech? To make my point more clear- a threat to our freedom of expression is a threat upon not only the rights of our citizens but the very principles we were founded upon. Being that you are the President of this country, I urge you to understand how the ideals and philosophies of the United States are threatened by limitations upon the locations and individuals protected by our first amendment right to freedom of expression.

To legally limit who is granted freedom of speech and press is to directly threaten what this country stands for. In the matter of individuals, I know that in 2013, the senator of California, Diane Feinstein, attempted to give the term press- as mentioned in the first amendment- a legal definition(1). She wanted to exclude bloggers and private individuals from the group protected by freedom of the press, Feinstein is also quoted saying that said first amendment is a privilege not a right. Had she gotten her way, a journalist would have to be registered to be protected by the rights granted the press, and thus those who say what is unpopular- what needs to be said- could very easily have been denied the right. The first amendment- straight from the bill of rights- reads “Congress shall make no law... abridging the freedom of speech, or of the press...” (US Bill of Rights). The first amendment is a brick wall, it is not meant to have loopholes that allow this kind of threat. Yet, it seems that as of now, we need to patch up any cracks that two centuries might have allowed to form in order to guarantee the continued protection of citizens rights. The fact that a proposition such as the mentioned was not immediately shut down shows that perhaps we have become too lenient when it comes protecting our founding principles.

Locational limitations upon freedom of expression also pose a threat to the rights and beliefs of the populous. The most widespread and obvious location based limit is the crisis on college campuses known as free speech zones. Since before the year 2000, colleges across America have been utilizing such zones on their campuses as a way to monitor and limit speech on the majority of their grounds. And for the past decade, federal courts have been ruling cases such as the 2012 University of Cincinnati Chapter of young Americans for Liberty v. Williams as unconstitutional (2). Yet, nearly one in six- that's roughly 20%- of United States colleges still have such zoning in place (3). Defenders of the policies will claim things such as the avoidance of conflict amongst the student body and eliminating the exclusion of women and minorities. But, as a young woman myself, I can assure you that eliminating the voice of minorities in no way helps them. In a great part, I believe that such proponents buy into their own lies and that their intentions are indeed good. But, the fact is that such policies do not assist in the intense- if somewhat controversial- spread of ideas that colleges have always provided us. Blocking the speech of students- on all but 0.1% of the campus in the case of UC- is point blank unconstitutional. Not to mention the exchanges deprived from the students. Ignoring controversial topics does not make them go away, confronting them is the only thing that has a chance. When people talk, they come to understandings and realisations. Free speech zones prevent students from exercising their first amendment right to do so.

What is different about this issue compared to others, is that this one has no basis in who someone is- it pertains to all of us. Every single United States citizen- independent of their race, sex, religion or sexual orientation- has a right to speak freely, publish what they wish and express themselves openly. And for every single citizen, this right is threatened. Along with the aforementioned there are the less tangible threats, things that are more disputable. Laws put in place with the ignorant intention of guarding what people say- censoring it, if you will- contain over broad phrases that “prohibit speech on the basis of listener reaction alone” or clauses containing the muddy word of “intent”, something that can not really be known (2). Also in that category falls the discrediting and intimidation techniques used against journalists who cast a harsher light upon their marks. It is the later that brought 12,799 individuals to sign a PEN America petition that was sent to both Democratic and Republican committees proceeding this year's conventions. All they asked of both candidates- yourself included- was that the problem be admitted. They called upon you and your opponent to “uphold freedom of the press” by condemning the personal attacks and discrediting of individuals (4). Journalists are key to a functioning democracy. And though they may become annoying, a fly on your shoulder who just won't leave, trying to get you to slip up, they are just doing their job- to keep you honest. If you have nothing to hide they have nothing to find. But when they are facing threats- such as the jailing that has taken place in countries across the middle east and more shockingly throughout our own history- it is our fundamental first amendment rights that are really threatened.

When the land of the free is being called out internationally for the wobbly ground upon which free speech is finding itself, than we know we have a problem. When officials elected by our free speech are trying to gag us and silence our voices, then we know we need to fix something. The type of speech that was outlined by our founding fathers was not a moderately limited one, it was an immeasurably limitless one. It wasn’t a reward for good behavior, it was a right guaranteed by years of fighting. The philosophy of our American society revolves around this idea of freedom to the people- all of the people- without that, America loses what made us America to start. To borrow the words of a UK journalist, “free speech is not a gift, like charity, to be handed down only to those deemed deserving. Freedom of speech and of the press is for fools, scoundrels, and scuttlebutt merchants, too”(5). This is not true everywhere, but if it is true anywhere that anywhere would be the United States. Here in America we take the good with the bad when it comes to freedom of expression. When the United States is no longer the land of the free, well than it is no longer the United States at all. 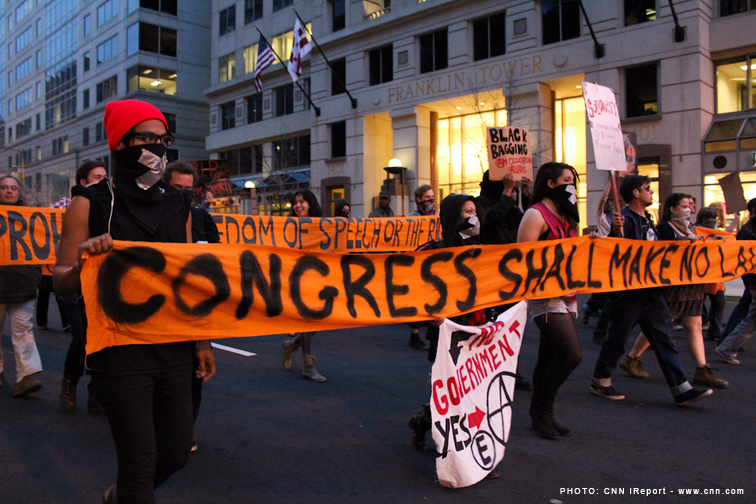 censorship free press freedom free speech 1st amendment
Published on Oct 31, 2016
Report a problem... When should you flag content? If the user is making personal attacks, using profanity or harassing someone, please flag this content as inappropriate. We encourage different opinions, respectfully presented, as an exercise in free speech.
Clarkston Community Schools

Letter to the Future President for Eisele's class. My letter is about school systems having a program to help teens better understand the consequen...

This letter will simply give suggestions about how our society can become a safer environment.

The Problem With Common Core Standards

My letter is based around my disbelief in the continued practice of Common Core Standards in education for the American youth. My piece addresses t...

A big issue in our country today is whether or not to ban guns or change gun laws.

Equal rights; women aren't equal to men and the media making it look like celebrities are higher than us but really we are equal.

The Problems with School Food

A compelling argument so school food is to be changed for the health of the children of America.

My letter to the next president about the cons of extracurricular activities.

Students are on overload with homework and need a way to more fully understand the content they are learning. I think the flipped classroom i the p...

Equal pay for both men and women.

Abortions should be very restricted and only for a few decsionsions

We Desperately Need More of It

Our video speaks to the increasing problem of Islamophobia in American society. We need a president who will stand up to bigotry!

Uniforms and how they negativity impact learning environments and how to fix these issues in a safe and logical way.

The Pen is Mightier than the Sword

In this letter I will be addressing the concept of banning books. Many people ban books to maintain a child's innocence. Those who disagree with th...

Reasons why censorship should be made illegal.