I’m writing to address the issue of immigration. We are a nation of immigrants. Most of us are not original inhabitants of the U.S., but came here in search of a better life from somewhere else in the world. But our immigration system is severely broken. There are immigration laws in place that need to be enforced for many reasons. I am in favor of legal immigration. However, illegal immigration is a problem in the U.S. that needs to be addressed. I think the biggest reason for making sure we have a clear immigration policy that is enforced is because we need to know who is here for our safety and security. I propose the solution of approving working visas, authorizing the use of armed forces on our border, and helping other countries make their own communities great so that their people might want to stay there.

First of all, I would like to bring attention to the issue of our broken immigration system. According to KQED Education, in the summer of 2014, thousands of migrant children, traveling without any adult care or supervision, were detained at the U.S.-Mexico border. The U.S. didn’t know what to do with them! We desperately need to address our immigration laws and figure out a plan to take care of the approximately 11 million undocumented people already living in the U.S.

We need to more clearly state our policy on immigration. According to The New York Times “The Department of Homeland Security has acknowledged that because so many minors caught in the past few years were reunited with their families here and not immediately deported, many Central Americans were left with the perception that the United States was allowing children to stay.” Since the children were not sent back immediately to their home countries, people from some Central American countries thought that the US was welcoming their children! This was really due to a new policy where children from Central America could not be sent back without a hearing first. They could still eventually be sent back, it was just a policy that slowed that process down. So that policy made some people mistakenly believe that our doors were wide open, when they really were not. We need to make our policy clear to the world!

But it’s not just unsupervised, immigrant children that concern me. I don’t think that immigrant children are likely to be a safety threat. But just this month, according to ABC News, The Department of Homeland Security (DHS) admitted a big mistake. Over 800 immigrants were given citizenship. These immigrants were supposed to be deported! There were issues of fraud--some of them using social security numbers that were not theirs, for example. And many were from countries “of concern to national security.” How could this happen? Does the DHS have the people and procedures in place in order to their job? According to the same article, “At least three of the immigrants-turned-citizens were able to acquire aviation or transportation worker credentials, granting them access to secure areas in airports or maritime facilities and vessels.” Although I like to hope that there is no need to worry that these new citizens will do something terrible, it only takes one to cause a lot of damage.

In conclusion, immigration is a problem that needs to be addressed in the United States. I believe authorizing the use of armed forces on our border is a must. In this way, the armed forces could keep people who are trying to cross our borders illegally out of our country. Secondly, our government should also continue to try to assist other countries with solving their problems so that their people will want to remain in their home countries instead of coming here. For those who do come here in search of work, we need to do a better job of tracking working visas. Unless the government and other responsible agencies start to implement better visa programs, it will be hard or impossible for us to eliminate this illegal immigration problem. I hope you listen to my suggestions and that you may be successful in solving the immigration problem in the U.S. 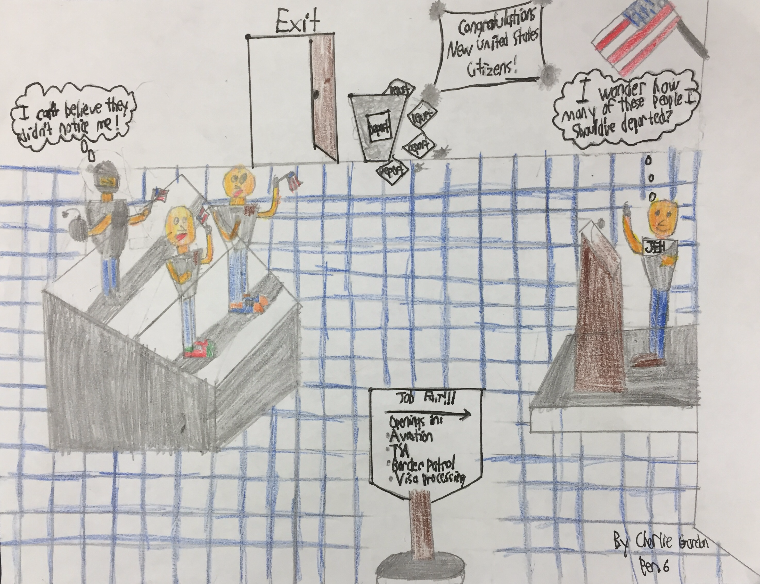 immigration censorship
Published on Oct 7, 2016
Report a problem... When should you flag content? If the user is making personal attacks, using profanity or harassing someone, please flag this content as inappropriate. We encourage different opinions, respectfully presented, as an exercise in free speech.
Bernal Intermediate

I think you should legalize marijuana because it could be a big help for people for stress and anxiety.

I think that the president should let illegal immigrants become U.S citizens .

There shouldn't be no walls or murder.

Immigrants should be in our country illegally

Immigration is a major issue in 2016.