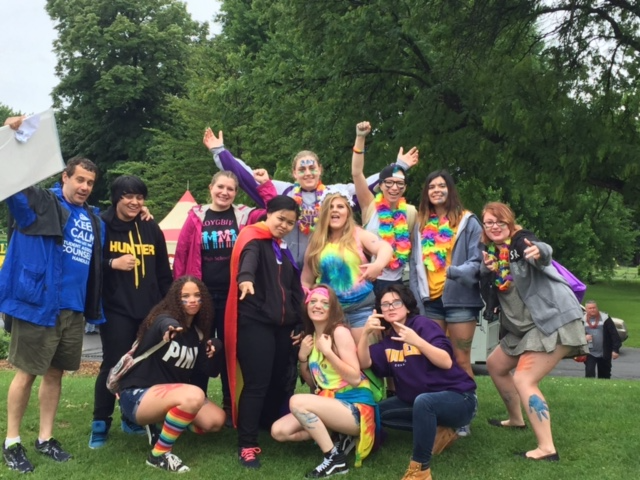 I bet that you know someone or are possibly related to someone in the LGBT community; no matter who it is we as humans still make a big deal about the gays the bi’s the lesbians and the transgenders. Put yourself in their shoes, how would you feel if you were denied being on your spouse's insurance, how about getting married with a job friday come back Monday and you are fired because you are with someone of the same sex? You wouldn't feel too great would you?

In 2013 a transgender person fought for their civil rights because she was trying to use the ladies room at her job. Because of her past for being a guy, her rights to use the ladies room were denied; not only that but the boss called her the wrong pronoun, “HIM”, on purpose. Fighting for LGBT rights is a civil rights movement! Seriously how many more deaths in the LGBT community do we need to see until people realize this is a serious problem? We are all humans. Our sexual differences should not give us different rights.

Even a United States senator, HIllary Clinton who is now in the running for the next president, says enough is enough. She addresses hate crime. She has fought for making federal charges against people who are discriminating against people in the LGBT community to protect them and keep them safe in work and the outside world. Hillary is also trying to stop the ban on gay couples from being able to adopt kids.

Yeah yeah and we all know the whole “it’s Adam and Eve not Adam and Steve” however nowhere in the seven sins does it say being gay is wrong. “God” is supposed to forgive the sins and love us for all we have and who we are as a person no matter what sexual orientation or other diversity we are part of. We as “God's” creation must be treated equal and loved as equally as the next.

Let’s look at changes.  Americans need to start realizing that we are all humans.  We are all different; people come from different backgrounds, beliefs, and sexual orientation, but we can’t see each other as monsters. We shouldn’t be blamed for all the wrongs in America; we should be looked upon as any straight person would. Instead of hate, we should come together and help make America good again.

When is this going to stop? We need to end the harassment, judgement, bullying, and murder.  LGBT people are humans; we live in this world together. We should all be treated equal. Innocent people are killing themselves, cutting themselves, feeling as though they are useless to the world all because people aren’t okay with who they are or who they love. Love is a very power word; why would someone use this as a joke.? Put yourself in their shoes ... how would you feel if someone judged you?

Thank you for your time and consideration,

lgbtq rights
Published on Nov 8, 2016
Report a problem... When should you flag content? If the user is making personal attacks, using profanity or harassing someone, please flag this content as inappropriate. We encourage different opinions, respectfully presented, as an exercise in free speech.
Troy High School

The Problem with Abstinence-only Education

A fifth of the youth in our country are being misled by Abstinence-only education. This broken system of education is leaving them vulnerable to un...

Student Choices and Career Based Learning

We can’t be expected to know what we’d like to do in the future if we’re not exposed to careers. All high school students should have access to div...

Gun Violence is on the Rise

Abortion should be legal for every family that feels it's necessary.

There are no equal rights in the United States. American Muslims are being treated bad in their own country that they fought for.

The War on Health Care for our Veterans

The health care our county provides our veterans must be more efficient, preventing excessive waiting times and obstacles that currently exist.

Terrorism and how to stop it

opinions on terrorism from a 16 year old

Genetic Selection enables individuals with hereditary diseases to select the genes of their children to ensure that they do not pass on defective g...

I wrote a letter to our next president regarding the issue of poverty.

This letter is to the president telling my thoughts on gay adoption and why this could be an issue to many people.

The focus on LGBT Opression in America and the world

Why We Must Enforce Protection for the Transgender Community

The LGBTQ+ community has always had a hard time. Especially the transgender community. This letter explains why we need to enforce protection laws ...

This paper is about discrimination towards the LGBTQ+ community and how to stop it.

This letter is about the struggles of teens in the LGBT community and how social and domestic support is important for their development in their t...