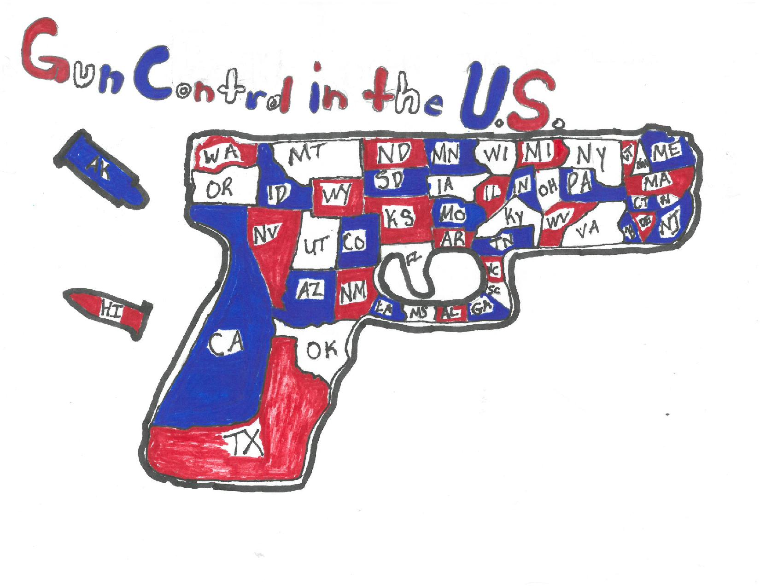 I am talking to you about the gun violence in the country. Gun control is an issue on which Americans are deeply divided, and Hillary Clinton and Donald Trump couldn't be farther apart on it. The fact that the public has so many guns has obligated police officers to arm themselves like soldiers and to become more aggressive in their tactics. In the world there are a lot of people that are being killed. Black American males are being killed by cops because some officers think Black males have guns when they don't, and it results in being shot. Kids should not have guns or know where they are, because bad things could happen like they could take it to school. A 14-year-old boy in South Carolina killed his father at home then went to an elementary school and shot two boys and a teacher with a gun he got at home. America needs more gun control.

gun issues laws
Published on Nov 7, 2016
Report a problem... When should you flag content? If the user is making personal attacks, using profanity or harassing someone, please flag this content as inappropriate. We encourage different opinions, respectfully presented, as an exercise in free speech.
Troy High School

The U.S educational system has been having a hard time over the last few years, with unprepared students, high priced colleges, and many lousy teac...

Racial Profiling is getting outta control & it needs to STOP

Protection of the 2nd amendment

I believe the second amendment is important and needed. If it is taken, then we lose a great and important part of the United States.

College tuition is getting in the way of other students achieving their education and life goals. I believe that the government can help make a bet...

The U.S. Economy is not in terrible shape, but it’s not in good shape either. I would say it’s merely just stuck. It will be hard to get out out of...

Drunk Driving: Too Many Lives Lost

There needs to be more solutions and stricter laws to prevent driving under the influence. People are losing family members unexpectedly. The next ...

Undocumented Immigrants should stay in the US

Undocumented immigrants should keep staying in the US, just as Obama have to give visas to immigrants and waiting for their citizenship. I believe ...

I Speak For The Trees

A call for help for those who cannot speak.

my letters about college tuition

What will our next president do for us?

Money means more to the minorities

Lower and middle class work hard and don't get paid for it.

Do not criminalize abortion.

On one side of the argument, there are those who want transgender people to use the restroom that corresponds with the gender on their birth certif...

More Laws to stop people from obtain a gun.