Police brutality has been a huge social media and news topic for a while now. We have hashtags going on like #BLM and hundreds of blogs written by news outlets all over the country. But why hasn't it stopped yet? Why hasn't any type of police reformation happened? “So far in only 2015, 920 people have been killed by police.” (Tomas, #1) That is 920 souls that have been lost forever. They were human beings brutally killed by police that didn’t deserve it. Those 920 human beings were sons, daughters, fathers, and mothers. “Police killed at least 102 unarmed black people in 2015, nearly twice each week.” (Tomas, #1) Guess which race has been affected by this problem than any other? That's right the African American race. “Unarmed black people were killed at 5x the rate of unarmed whites in 2015” (Tomas, #1); all because of their race and skin color. Nobody should be afraid by the men and women dressed in blue who are suppose to protect us. I believe that there should definitely be some type of police reformation such as making the people who want to become cops spend more time training and practicing so they know how to deal with the situations better.

The reason why I chose this topic was because I am tired of these killings happening. I am tired of seeing videos on my timeline of innocent people being killed in the streets. I am tired of no one doing anything to stop this. I don't want to grow up in this world remembering the horrific experiences of watching human beings die. “As the parents continue to stress how important it is to follow police officers’ instructions, one woman acknowledges the heartbreaking reality that this does not guarantee their safety or whether or not it will work or if they will see each other afterwards.” (Pittman, #4). This is cold-hearted murder that is happening and sometimes the only punishment applied to the cop responsible is getting paid leave. This is murder. There is no buts or ifs or even accidents. The cop had the hand on the trigger or the taser and had the choice. The choice to take away something that wasn't theirs. A father, a mother, a son, or a daughter.

I think police officers should spend more time training so they could deal with some situations better. This could possibly lower the chance of less death. In a 2006 report from the Dept. Of Justice, “police academies spend about 110 hours training their recruits on firearms skills and self-defense — but just eight hours on conflict management and mediation.” (Chang, #3) Though the report may have been written a while ago, it is the most recent data that has been shown to see how much time is usually spent training police officers to ease tense in situations. Spending more time training in the more mental and emotional part of the job could cause less conflicts between the intense situations that police officers have to deal with on a daily basis. More improved training could better everything.

First and foremost, there should never be a human being so cruel, so cold, to ever say that police brutality is a good thing in this society. There are no pros to this situation. No one can fight me on this by saying that killing someone for no apparent reason is okay. I also want to say that not all cops are bad. There are amazing cops that love their job and serve to protect. But on the other hand, there are some cops who have no clue on how to act when they're on duty and cause problems. Now, if the person was being hostile towards the police, or showing signs of REAL force, then a taser or handcuffs could be used. If it’s for an extreme case, like finding a kidnapper or a rapist and the only way to stop them would be by shooting them then clearly I would understand. But, if it was for getting pulled over on the side of the road and you are reaching over to get your license and registration and the cop thinks that you are reaching for a weapon and they shoot you, that is, under no circumstances, ever okay. If you have no reason to be putting your finger on the trigger, why pull it? “Police officers now know that if they commit murder, they won't get charged for it. They use deadly force when shooting someone. They should be told to shoot in the arm or legs but no more than two times. This would limit the amount of deaths they commit.” (Anonymous, #1). It's true what they say when they say that violence is never the answer. It solves absolutely nothing. It just makes things worse.

Future Mrs/Mr. President, what I suggest is to please listen to the people. Listen to the families that have been affected by police brutality. Serve justice to the people that have been hurt by police. Make police departments all over the county spend more time training the future police officers. Barack Obama already has spent nearly almost $75 million over the next three years to provide 55,000 police cameras to local police departments. It has lowered deaths by 67%. This is the change we need to start seeing. Think about the next generations to come so this won’t keep repeating. One of our most biggest advantages that we have is the United Nations. The Global Goal that this subject is closely connected to is Peace, Justice, And Strong Institutions.

The United States accepted most of the recommendations from United Nations member states on combatting racial discrimination, racial profiling and the use of excessive force by police officers according to a report. We have the power and the freedom to make a change. It all starts with one simple thing happening. That once single thing can be started by you. 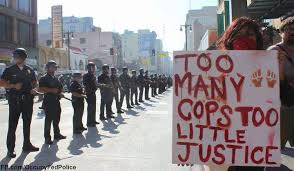 This one picture has a strong vibrant message. It reads, "Too many cops, too little justice." Which she is right. Not all families who have been affected by police brutality has gotten the justice they've deserved.

College debt needs to be fixed.

We must find a way to create energy that is renewable, and clean. Change is inevitable, so we must start it now.

Letter to the future president about minimum wage

This letter is about police brutality and the use of excessive and/or unnecessary force by police when dealing with civilians.

Far too many people, especially those of color, are dying or becoming severely injured because of the police.