The epinephrine autoinjector, or the epipen, is made by the company Mylan who made epipens more and more expensive and some people who need them might not be able to get them in time because of that. The price of epipens have risen astronomically from $57 in 2007 to $600 in 2016 (Novak, pg. 1) with this price increase affects about 3 million people worldwide who need this product. Currently one epipen is about $600 which I think is outrageous. This product was first introduced in the mid-1970s by Sheldon Kaplan. People who are affected by this are people with severe allergic reactions (anaphylaxis) to insect stings or bites, foods. I believe that epipens should go back to a lower price it was in the past so more people are able to afford it because if not then someone may not be able to get to an epipen if they need it.

I think that the government or someone who is high in power should either speak out about the the cost of epipens so the public is aware about Mylan’s actions.Someone who is high in power in the government needs to make the public aware. If no one speaks out against Mylan then people will still have to be spending almost thousands of dollars each year on two epipens which isn’t right

One epipen costs about $600 or more and usually people buy a pack of two epipens so that’s over $1000 dollars a year on epipens because you have to replace them every year. This matters because instead of spending thousands of dollars a year on epipens if Mylan lowers the price you could use that money you don’t spend on epipens on stuff you really need or a family vacation. Also, whoever the future president ends up being I think should definitely have to do something to have Mylan lower the prices. If the president reaches out to Mylan about the prices I’m 99% sure the company would listen and lower the prices. It matters because without the government knowing about what going on then nothing would be done about the epipen prices. That is why I think the government or future president should do something about this.

Mylan is only looking at a way that they can make the most money and aren’t doing what is best for people. Mylan is probably thinking that if they raise the price then they will get more money but they might lose money because of it. If people are not able to afford the epipens then no one is going to be able to buy them which makes the situation bad for both sides because people could have allergic reactions and not have epipens and Mylan will lose money as a company. Mylan’s profit has been 60% higher on the two packs of epipens recently because of the price change. It matters because if all Mylan cares about is the money then their gonna be in for a rude awakening when people start rejecting to buy their epipens. That is why Mylan is only looking for a way to make the most money out of the epipens.

I think the future president should make the price for epipens more affordable to everyone who needs them.This connects to the global goal good health and well-being. This would help the US support the UN’s initiative with the global goals and everything because with lowering the price of epipens it’s making sure everyone is in good health. This needs to be a priority for the next president because if someone doesn’t have the right medication for an allergy then it could be deadly and changing the prices on epipens could potentially save a life. 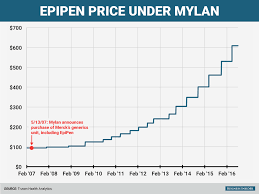 This image is important because it shows how much the price for epipens have changed over the year and how high the price has been raised to over $600.

epi pen allergies
Published on Nov 22, 2016
Report a problem... When should you flag content? If the user is making personal attacks, using profanity or harassing someone, please flag this content as inappropriate. We encourage different opinions, respectfully presented, as an exercise in free speech.
Chaska Middle School East

Women and men deserve all of the same rights and opportunities. Also, women should not be known as the lesser gender and should be treated with mor...

This letter is requesting an end to standardized testing in the United States.