We also need to help some people who don’t speak English well as immigrants we need advanced and well trained translating teachers and some experts and this will help people better education and in conversation with other people as well.

Immigration is a good thing for our economy because we could make more money and build more houses to expand and have a more advanced, better built society.

My mom once told me a story of my uncle that he was here with his family, but then he had to go back to London and his son was only five years old. He would always tell his mom where did my dad goes, I want to see him. Then when he was 7 or 8 years his mom told him he went to London and he can't come back. The kid said can we go see him and his mom said no because she did not have papers either. Well, I wish the next president could do something about immigration. 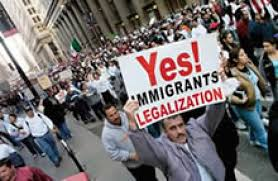 immigration
Published on Nov 7, 2016
Report a problem... When should you flag content? If the user is making personal attacks, using profanity or harassing someone, please flag this content as inappropriate. We encourage different opinions, respectfully presented, as an exercise in free speech.
Upper Merion Area High School

My letter to the president is talking about Gun control.

Everyone should have opportunities to have an education.

How do you, as the next president, plan on dealing with the current immigration situation?

The plaque at the base of the statue of Liberty states "Give me your tired, your poor, your huddled masses yearning to breathe free, the wretched r...

Childeren are the future of this world! Child abuse is destroying children all around the world and also destroying their future. What can you do t...

My Thoughts On Police Brutality

A letter to the president of my thoughts on police brutality against African Americans in America and some solutions.

This letter is about the Second Amendment and the right to protect ourselves, along with a second-hand perspective of an immigrant.

It talks about what the situation is and why it's important.

Immigrants should have the right to be legalized

If your going to become the next president of United States you need to do something about the immigration.