I would like to tell you about gun control because of increasing gun violence in the United States and our disturbing environment. And I worry about my country because I care about it and I believe that you will definitely make some changes in our country. That’s why I am writing you this letter.

There’s also other issues which I have seen such as murders in the gay club in Orlando where one lone gunman singlehandedly killed 49 people. This issue was marked as the deadliest mass shooting in American history which is very sad. This incident also caused the national debate over gun control and gun violence which is happening in the U.S and causing major problems at almost everyone’s home.

The second incident that happened was with my father and with his army friend. They both lived in the United States together before. Some big creepy robbers went to their house for some cash and showed them a big long gun to scare them, but nothing actually happened to them because my father and his friend smashed lots of beer bottles into their heads for safety. Those robbers ran away because then my father also called 911. I would say, God actually blessed them because he saved them.

Guns are actually common in the United States. The United States has 8.8 guns per 100 people. My opinion to stop the gun issue is to ban gun sellers and gun producers because if we do that, the risk of murders will be reduced in this country and maybe this issue will resolve itself if we all unite and stop this.

I also think that there are many people like me who also worry about this country. I want the next president to control these gun issues and spread positivity in this country. Hope you will read this letter and take action upon it. 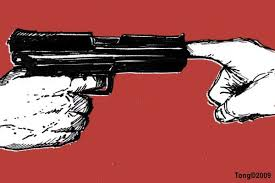 gun issues
Published on Nov 7, 2016
Report a problem... When should you flag content? If the user is making personal attacks, using profanity or harassing someone, please flag this content as inappropriate. We encourage different opinions, respectfully presented, as an exercise in free speech.
Upper Merion Area High School

I think that Immigration is the best thing and beneficial for this country.

Why banning assault rifles is an ineffective goal and ultimately a bad decision for the U.S.

Allowing Personal Weapons in the U.S. is a Bad Decision

Personal weapons in the U.S. should not be allowed.